New torpedo to replace the "Squall"

19 2013 June
45
At the end of the seventies into service with the Soviet naval fleet received a reactive torpedo (the term missile torpedo is also often used) VA-111 “Flurry”. She had a great advantage in speed over existing samples. During the movement, the ammunition, forming a large cavitation cavity around itself, could accelerate to a speed of about 500 kilometers per hour. At the same time, the new torpedo was not perfect and had several drawbacks. She was too noisy, and the firing range did not exceed several kilometers. In addition, the control system of the torpedo “Flurry” allowed her to move only in accordance with a given program. Own guidance equipment was not provided. 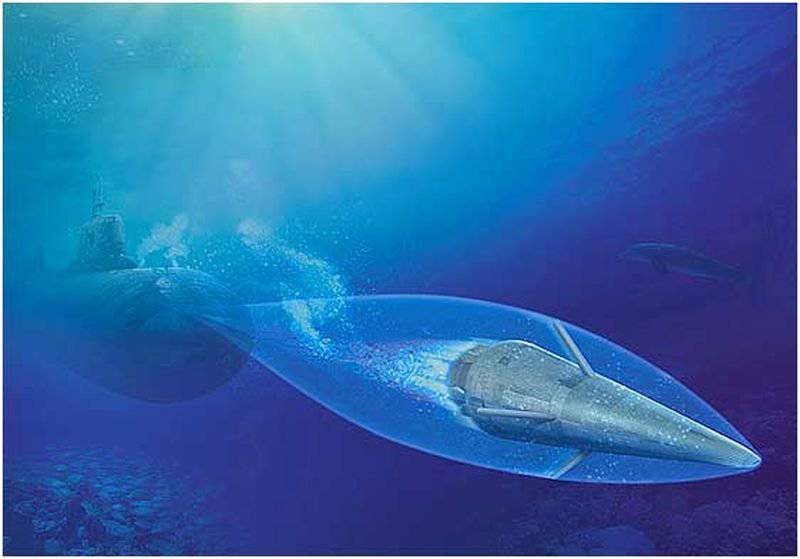 The Squall complex was in service for about fifteen years: in the first half of the nineties, the fleet abandoned it. Around the same time, an export version of the torpedo was created under the name "Flurry-E". After de-commissioning, rumors regularly appeared and news fragmentary character, talking about the possible creation of a new version of high-speed supercavitating torpedoes, which will later replace the retired sample. However, until recently, the development of an updated "Squall" or even a completely new torpedo of a similar class remained in question.

A few days ago it was confirmed that work on the new torpedo was already underway, but so far they are at the stage of scientific research and theoretical calculations. On Monday 17 June, RIA Novosti published an interview with the chief designer of the plant Dagdizel and the first chairman of the Russian scientific council for torpedo construction Sh. Aliyev. The company where he works, previously produced torpedoes "Squall", and now, as it became known from the interviews, conducts research on the topic of similar ammunition. Judging by the information provided by Aliyev, it is still too early to talk about the timing of the project’s implementation, since it is in its very early stages and a number of serious issues have not yet been resolved.

Thus, at present, the staff of the Dagdiesel design bureau together with several research organizations are working on the hydrodynamic appearance of a promising high-speed torpedo. The most important issue at this stage of work is the boundary of the cavitation cavity. When the torpedo moves inside the cavity, there is no clear line separating air and water, which is why the study of the hydrodynamic part of the project becomes particularly difficult. It takes time to solve this problem, and only after the formation of the hydrodynamic image is completed, the work can continue.

Only after the hydrodynamic appearance of the promising torpedo is determined, will other design work begin. The appearance will allow to form the main features of the project, such as the payload, layout, etc. In other words, it is too early to talk about the characteristics of a future torpedo. The only parameter about which you can speculate is its speed. Since the prospective ammunition will use the effect of supercavitation, then its speed will be appropriate, several hundred kilometers per hour.

It can also be assumed that the promising high-speed torpedo in general will resemble the Squall itself: an elongated body with a maximum diameter of 533 of a millimeter, a jet engine in the tail section and a cavitator in the nose section. The question, however, remains specific technical solutions relating to a particular structural element. In addition, when developing a promising jet torpedo, it will be necessary to solve a number of problems peculiar to the previous "Squall."

It is hardly possible to get rid of the noise produced by the torpedo during movement. The jet engine is too loud for covert use from submarines. An asymmetric solution to the problem of noise can be a significant increase in the range of the torpedo. The original BA-111 “Flurry” complex allowed attacking targets at ranges of no more than 8-10 kilometers, which is clearly not enough for an imperceptible launch. The progress of the last decades in the field of solid propellant jet engines will probably help to make a jet torpedo with a radius of action much higher than the similar parameter “Squall”.

A significant increase in the effective firing range of a prospective torpedo implies the creation of a certain new control system. Ammunition "Squall" was equipped with an inertial control system, which kept him on the current rate. With a relatively long range to the target, such systems are unsuitable for practical use. Dagdiesel engineers understand this. In an interview, Sh. Aliyev recalled the American ideas on the management of high-speed torpedoes. So, it was proposed to equip the ammunition with several groups of sensors and transmit information from them to the operator’s console, in order that he could make adjustments to the torpedo's trajectory.

There is information about similar works in our country, but they are extremely scarce and fragmentary. Moreover, according to the current state of domestic jet torpedoes, appropriate conclusions can be drawn. It seems that the Soviet and then the Russian designers did not succeed in creating or, at least, bringing the high-speed supercavity torpedo with any guidance system to mass production. Thus, Dagdizel employees will have to solve the problem of controlling ammunition at long distances.

If the project is completed successfully, the designers will be able to combine all the possible advantages and eliminate most of the shortcomings, then the new torpedo will undoubtedly be of interest to the Navy. However, judging by the available data, the full development of a technical project will not begin today or tomorrow. Therefore, in the foreseeable future, naval sailors will have to use not too fast, but the available torpedoes of the traditional scheme.