Only with the help of NATO forces, the Lithuanian army can be calm for the security of its territory

19 2013 June
88
The Republic of Lithuania spends about 0,8 percent of GDP on defense (in 2012, almost 344 million dollars). The country's army can be said to be weak and poorly equipped, and it does not have the capacity to mobilize larger forces. The basis of the ground forces is only one brigade of infantry. Lithuanian armed forces cannot independently protect the country without the help of the North Atlantic Alliance. But in Lithuania there are volunteer formations that are ready to recall the guerrilla experience if the enemy suddenly attacks.


Lithuanian armed forces consist of ground forces, naval forces, air forces and special operations forces. They lead their history from the Lithuanian army - the army of the Republic of Lithuania 1918 – 1940. Shortly after the surrender of Germany in World War 23 on November 1918, the authorities of the newly established Lithuanian Republic issued an act on the formation of the army. This day is celebrated as the Day of the Lithuanian Warriors.

20 December 1918 Lithuanian Council Chairman Antanas Smetona and Lithuanian Prime Minister Augustinas Voldemaras arrived in Germany to get assistance in the formation of armed forces. Until the end of the year, Germany paid Lithuania 100 millions of marks of reparations, which went to purchase weapons for the army. Basically it was the weapons left by German troops in Lithuania. In late December, the new Lithuanian government headed by Mykolas Slejevic, 1918, issued an appeal calling for voluntary participation in the army to defend the homeland. Volunteers promised to give land. In parallel, Germany began to form volunteer units in the Baltic States. Parts of the 1 of the German Volunteer Division arrived in Lithuania from Germany in January 1919. All German units, including volunteers, left Lithuania in July 1919. 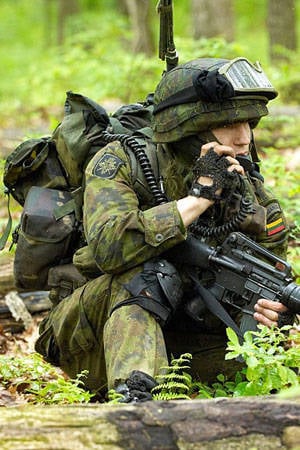 5 March 1919 was announced mobilization in the Lithuanian army. His number by the end of the summer reached eight thousand. The Lithuanians had to fight against the Red Army, which invaded Lithuania from the east. January 5 1919 was occupied by Soviet troops in Vilnius, and January 15 by Šiauliai. Lithuanian troops with the help of the German volunteer corps (10 thousands of people) stopped the Red Army at Kedaynaya. February 10 combined German-Lithuanian troops defeated the Soviet near Sheta near Kaunas and forced them to retreat. The Germans fought in Lithuania until the end of May 1919, as the German government was concerned about the advance of the Red Army to the borders of East Prussia. April 19 Polish troops drove out of the Lithuanian-Belarusian Soviet Republic from Vilnius. By early October, 1919, the Lithuanian army ousted the Red Army from the territory of Lithuania. In July - December, the Lithuanians fought against the White Guard Western Russian Army, General Pavel Bermondt-Avalov, which also included German volunteer troops, and inflicted defeat on Radviliškis in November, and the Western Army ousted December from Lithuania.

12 July 1920 was a peace treaty between Lithuania and Soviet Russia, according to which Moscow recognized Lithuania’s right to Vilnius. This city, occupied by the Red Army in June, after the defeat of the latter near Warsaw, was transferred to the control of Lithuanian troops in late August. In September, battles began between the Polish and Lithuanian troops. October 7 in Suwalki was reached through the mediation of the Entente armistice agreement. However, the Lithuanian-Belarusian division of the Polish army under the command of General Lucian Zeligovsky, allegedly withdrew from the obedience of the Polish government, broke the resistance of the Lithuanian troops and took Vilnius in October 8, which was annexed to Poland in 1923. Fighting between Polish and Lithuanian troops was stopped at the end of November 1920.

After Lithuania joined the Soviet Union in August 1940, the Lithuanian army was reorganized into the 29th territorial rifle corps of the Red Army. The only naval training ship fleet Lithuanian President Smetona, bought from Germany in 1926, was transferred to the Soviet Baltic Fleet, where it was renamed Pirmunas (Excellent Master), then included in the NKVD maritime border guard under the name Coral, and with the beginning of World War II it became part of the Baltic Fleet and was used as a patrol ship and minesweeper. January 11, 1945, then renamed the minesweeper T-33, it was sunk by a German submarine or blown up by a mine near the island of Aegna. Lithuanian military aviation, which by the summer of 1940 had several dozen machines (mainly educational and reconnaissance obsolete designs), was abolished. Nine ANBO-29s, three ANBO-29s, one “Gladiator I” were transferred to the arsenal of the 41th corps as part of the 51th corps air squad.

On the eve of the Great Patriotic War, almost all Lithuanian officers of the 29 Corps were arrested. Since the beginning of the war, 16 of thousands of 14 thousands of Lithuanians who served in the corps were either deserted or weapons in their hands, having interrupted the commanders and commissars of non-Hitovites, they revolted against Soviet power.

The main enemy is determined

The Lithuanian army was reconstructed with the restoration of Lithuanian independence in March 1990, and the formation of the Department of Regional Defense and the first training unit of the armed forces. However, practical measures to create an army followed only after the actual collapse of the USSR in August 1991 and recognition of the independence of Lithuania, Latvia and Estonia by the allied authorities and the government of the Russian Federation in September. October 10 1991 was appointed the first Minister of Regional Security - Audrius Butkevicius, who previously headed the Department of Regional Security. December 30 1991-th awarded the first Lithuanian military ranks.

2 January 1992 began its activities by the Ministry of Regional Protection and was re-established Lithuanian military aviation. At the same time, the first call for active military service was announced. 1 September 1992 was opened in Vilnius, School of the region. Lithuanian army officers are also trained in the USA, Germany, Poland, other NATO countries and in Sweden. November 1 was created by the fleet of the Naval Forces of Lithuania.

19 November 1992 of the year The Supreme Council - Rehabilitation Sejm proclaimed the re-establishment of the Army of the Republic of Lithuania. Continuing the traditions of the army of the interwar period, many battalions of the modern Lithuanian army were assigned the names of 20 – 30's regiments and their symbolism. The divisions of the volunteer forces were named after partisan districts, into which Lithuanian partisans who fought against Soviet power in 1944 – 1957 were subdivided.

29 March 2004, the year Lithuania joined NATO. Its Armed Forces are integrated with the armed forces of other North Atlantic Treaty Organization countries. The military doctrine of Lithuania was adopted by 10 in March of 2010. It envisages the conduct of military and peacekeeping operations in cooperation with other NATO members and within the framework of the missions undertaken by the Alliance. In the event of a collective defense situation, the armed forces of Lithuania are transferred under the command of NATO. The doctrine considers “unstable states whose documents related to defense and security policy are considered as the only threat to Lithuania’s security, while military force allows for military actions directly or indirectly directed against Lithuania or its allies”. This definition is understood primarily as Russia, although no Lithuanian documents directly mention this and our country is not called. In the case of external aggression, it is assumed “independent defense of the country and its collective defense together with the allies”.

15 September 2008 was canceled for urgent military service. The last recruits were transferred to stock 1 on July 2009. From 2009, the recruitment of the armed forces is carried out exclusively by volunteer contractors.

In the armed forces of Lithuania 10 640 people, including 8200 - in the Army, 600 - in the fleet, 1200 - in aviation, 1804 - in the headquarters and services common to all armed forces. 4600 people are reservists of ground forces in the reserve, united in the Volunteer Regional Defense Forces. The male population between the ages of 16 and 49 was 2010 in the 890 year of a thousand people, of whom the number fit for military service is estimated at 669 thousand. Every year the age of 18 years, from which service can begin in the army, reach 20 425 men.

Lithuanian military expenditures constitute 0,79 percent of GDP. In 2012, they can be valued at 343,65 million dollars at the official exchange rate for currencies and at 511,9 billion dollars at purchasing power parity. The lack of financial resources affects the level of equipment of the army with armament and military equipment and the training of servicemen.

4600 active reservists from the Volunteer Guard Forces of the region are combined into six regiments and 36 territorial defense battalions.

The fleet has three Standard Flex 300 Danish patrol boats armed with one 76-mm cannon, and one Storm Norwegian patrol boat with Penguin anti-ship missiles, one 76-mm and one BN.40-mm cannon.

There are also two German minesweepers of the Lindau type (type 331), two British minesweepers Skulvis (of the Hunt type), one Norwegian minelayer of the Vidar type (used as a control ship).

The Lithuanian Navy is focused primarily on the fight against mine danger. In the presence of four auxiliary port vessels of Soviet and Danish production.

Command, serving the needs of all armed forces

Combined supply command has 1070 people. It consists of one supply battalion. In the Joint Command Training and Documentation 734 person, consists of one training regiment.

Militarized formations of other departments

The Lithuanian Shooting Union is a public organization engaged in preparing young people for military service. In it 9600 people.

The Border Guard of the Ministry of the Interior has 5000 people. Coast Guard - 540 man, has three Finnish and Swedish-made patrol boats and one British-made Griffon 2000 amphibian.

Lithuanian troops outside the country and foreign allied forces in Lithuania

As part of the NATO program to protect the airspace of the Baltic countries, Lithuanian airspace is patrolled on an ongoing basis by four F-16 fighters from Germany, the Netherlands, Denmark and other NATO countries. In the event of a sudden Russian invasion of Lithuania, other Baltic countries and Poland (although Russia does not name the document directly, it is clear that we are talking about it and not any aliens) at NATO in the beginning of the year 2010. Eagle Guardian (“Eagle Defender”), which envisages the transfer to these countries in a threatened period or immediately after the start of the aggression of nine divisions of the armies of the USA, Germany, Great Britain and Poland with appropriate aviation support to the territory of the Baltic States and Poland and sending warships Alliance Polish ports in Germany and the Baltic countries.

In general, the Lithuanian army in combat effectiveness is not inferior to the armies of other Eastern European countries - members of NATO, it has the ability to fully take part in peacekeeping operations of the alliance and other international structures with its ground forces. At the same time, the Air Force and the fleet are unable to solve the tasks of protecting the Lithuanian territory, and in this respect Lithuania relies entirely on the help of NATO allies. In the event of an attack from Russia, it is assumed that the Lithuanian army will be able to successfully defend at least during the week, before reinforcements from other countries of the North Atlantic Alliance approach, but subject to air support from the first day of the fighting. At the same time, the main hopes for the Volunteer forces of the regional defense, ready for partisan actions in the event of enemy occupation.