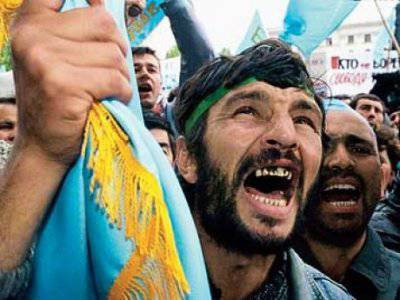 Over the past two months, several events have taken place in Ukraine at once that allow us to speak of a sharp intensification of the Tatar, ultranationalist forces on the Crimean peninsula. In order not to be unfounded let us turn to the facts. So, 22 May in Kiev in UNIAN agency held a round table on the topic "The Turkic factor in Ukraine" with the subtitle: "What do the indigenous peoples of Crimea want?". It should be immediately noted that at this event only and only representatives of the Crimean Tatar minority inhabiting the Crimea were called “indigenous people of Crimea”. Debates and discussions were held, the main leitmotif of which was "ensuring the rights and freedoms of the Turkic peoples inhabiting the Crimean peninsula". What is curious, an unknowing person who visited this event could have a persistent feeling that the Crimean Tatars are the only ethnic group inhabiting the Autonomous Republic of Crimea. Speakers diligently, even scrupulously avoided any mention of the other autochthonous peoples of Crimea, who have been inhabiting and still living in this part of modern Ukraine since ancient times. This, above all, is about the Greeks, Armenians, Bulgarians, Ukrainians and Russians. Although it is necessary to emphasize that the representatives of the Gagauz and Azerbaijanis who were present at this event did not allow themselves to go beyond certain moral and ethical standards, unlike the representatives of the Crimean Tatar speakers, the leitmotiv of the speeches of which was mainly to expand the powers and rights of the "Muslim Crimean population. "


Immediately after the end of the round table, Rovshan Tagiyev, the head of the Congress of Azerbaijanis of Ukraine (KAU), made an official statement, saying that "the International Conference of the Turkic Peoples of Ukraine is planned to be held in the fall in Crimea." One of the most active participants of the round table, the former ambassador of Azerbaijan to Ukraine, Talat Museib ogly Aliyev, revealed the goals of the upcoming conference: "Representatives of the Turkic peoples must declare themselves," moreover, the loud voices of the participants about the "protection of the rights and freedoms of the Tatar population" of Crimea. But that or who specifically threatens the security of Crimeans of Tatar nationality, no one could clearly explain.

The described trends are particularly alarming against the background of the fact that for many years now official Kiev has been showing frank passivity in curbing the anti-state activities of Tatar nationalist organizations that are conducting ideological and subversive work in areas densely populated by the Tatars in Crimea, say more - the self-proclaimed "Majlis" (parliament ) The Crimean Tatar people today are, de facto, an alternative governing body in a large area of ​​the Crimean autonomy. Moreover, it should be immediately noted that the leaders of the Tatar minority never really concealed the main goal of the so-called "Tatar revival", which is the separation of the peninsula and the proclamation of an independent state under the protectorate of the Arab and Turkic conglomerate called the organizers of the round table "Islamic world."

The second no less significant event was the rally organized by the Islamic movement "Hizb ut-Tahrir" in Simferopol on June 10, 6. Immediately it should be noted that this structure is prohibited in many countries of the world (USA, Russia, Canada, Australia, Denmark, etc.), as a terrorist organization. According to public information, leaked to the world press, this movement is a kind of Al-Qaida recruiting agency in the CIS countries. Slogans, sounding at the rally, would have shocked any Crimean non-Tatar nationality. Frankly fascist appeals to clear the Crimea of ​​"infidels" and announce the recruitment of volunteers who want to fight in Syria on the side of the anti-Assad forces, and all this under the black flags of the organization. According to open sources, emissaries of Hizb ut-Tahrir consider their goal in the near future to establish control over all the mosques of the Crimea and the presence of their representatives in local governments. It’s not necessary to explain what the radical radicals from among the aggressive Islamists are coming to the real power, as a rule, this is the inevitable confrontation and aggravation of the interethnic situation.

But the most curious in this political mosaic is the support of the separatist forces of Crimea from the ultranationalist party of Ukraine "Freedom". The situation actually resembles a tragicomedy, the party of “broad Ukrainians,” who always and everywhere advocate the protection of everything Ukrainian, actually supports the forces that advocate not only the collapse of Ukraine as an integral state, but also actually call for clearing the Crimean peninsula from non-tatar element ". So, at a rally organized by the Crimean Tatar "Mejlis" 18 in May in Simferopol, a deputy of the Verkhovna Rada from the Svoboda party, Eduard Leonov, spoke on the "full support of the aspirations of the Tatar people inhabiting the Crimea." Even taking into account the low intellectual level of the majority of “Freedom” deputies, such statements are not made just like that, but carry certain signals from the central government in Kiev. In fact, the pro-Islamic ultranationalists of Crimea found in the face of "pure-blooded patriots of Ukraine" a force that supports them in the ethnic rejection of the non-Tatar, and therefore the Ukrainian population of Crimea.

Taking into account the sharp intensification of separatist forces on the territory of the Crimean peninsula, President Yanukovych has no choice but to immediately begin clearing the Augean stables of Tatar national separatism, which were launched to a state of "sluggish disease" by his predecessors, in every possible way. Otherwise, against the backdrop of an unprecedented surge in the activity of the Islamic world, the situation in the coming years (and maybe even months) will get out of the control of official Kiev with all the ensuing consequences.

Ctrl Enter
Noticed oshЫbku Highlight text and press. Ctrl + Enter
We are
What you didn't want to know about EnglandInterview by President Bashar Al-Assad to the Sunday Times
Military Reviewin Yandex News
Military Reviewin Google News
52 comments
Information
Dear reader, to leave comments on the publication, you must sign in.