Education in Russia led by enemies 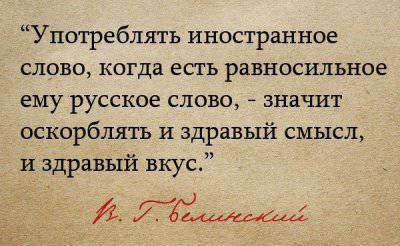 “Oh, great and mighty!” - we exclaim, proud of the fact that we speak Russian, the best, most gentle and at the same time the most severe, most musical and most precise, capable of expressing the most subtle movements of the soul. He is spoken to with God. All the leading minds of the world took off their hat to him. What did the Russians achieve unattainable heights in all areas of culture, science, technology? From the fact that the breadth and depth of thought gave them Russian. And it was enough for all occasions. But there were times when they were carried away by others. But the apostle Paul said that knowledge of foreign languages ​​is the lowest knowledge. And the highest, of course, is the knowledge of God. This truth began to be forgotten in Russia since the “kingdom of women”, Yekaterinburg and Elizabeth, from the 18 of the 20th century. Why did the nobles need French? To speak with the servants and that the servants do not understand them. That’s all. But the use of a foreign language led to the fact that the cultural French came to Moscow to urinate in the church vessels and drive their horses to the Assumption Cathedral of the Kremlin.


And another example: when the Turkish cavalry entered Constantinople in 1543, there was practically no resistance to it - the city was already taken: Turkish speech was heard in all the squares and streets of Byzantium.

Oh, language is a fateful matter. We see: in which part of the planet English is being introduced, territories are becoming economically and politically captured by the new world order, and where Russian appears, consent and fraternity reign. But today’s our educational system is pleasingly bent before English speaking.

And it is very easy and not at all fantastic to imagine the entry of Americans into the cities of Russia. “Oh, John, here is America! All signs in English, the children shout: "Good Day, Kam Ying", glad our chewing gum. Russia is ours, John! ”

But it seemed to be a good day for Russia - the Day of the Russian language on Pushkin's birthday. And Pushkin perceived insulting the Russian language as a personal insult. Now there seems to be no obvious insults. But there is no primacy of the Russian language. It is said that he reigns on the Internet, but this is the so-called “Albany” language, truncated, slang, slang, clip, full of criminal and professional terms. Essenny, in general, the language is almost avian. But the birds can still be distinguished, if you listen carefully, and the lark can easily be distinguished from the nightingale, and the finch from the chiffchaff. After all, consciousness is the ability to think and communicate in one’s native language. It is in the native. A foreigner who has learned Russian does not become Russian.

The State Duma held a meeting in defense of the Russian language. The case is very good, just a holiday. But it was spoken largely about the study of Russian by foreigners, about help, of course financial, for this matter. They said: here Belarus, Kyrgyzstan recognize the Russian language on a par with the state, but the other former republics still do. But pardon, do not the janitors, and the Moldavian shop assistants speak Russian anymore? Does not the capital turn black, does Siberia turn yellow? This is the seizure of Russia. Of course, this is primarily from the greed of the new capitalists: they are good at paying foreigners less, and they can live in the trailers, but also because the poor people from Central Asia, China, and Vietnam have nowhere to go, there is no life in their homeland. Their Russian language is: buy-sell, vira-mine, round kati, flat drag, dobra, ruski, centilles?

And what about Russian affairs? In Russian, children do not read books, in Russian, adult uncles of Livanov, who have wives of Yega, are being driven from school to the most precious thing in Russian culture - Russian literature. And children, deprived of access to the pure springs of the Russian language, begin to work on a hair dryer - a pancake, cool, that is, it is incomprehensible for adults to express themselves. And the children like it very much, and as for the fathers and mothers, children do not care.

I speak openly and publicly - Education in Russia is led by the enemies of Russia.

Prove it? You are welcome. I will speak as simply as possible. In man, there are two levels of feelings, namely, through the senses, we both know the world and communicate with it. Two levels: lower and higher. Lower feelings: pain, hunger, pleasure, fear. Pain requires healing, hunger saturation, pleasure to continue. And fear can give rise to anger, insecurity, gives rise to and vindictiveness, develops into anger, hatred, hostility. Here there are quarrels and fights, constant fears, anxieties, cowardice and aggression, in a word, everything with which Russian bodies and radio news are saturated. These feelings lead to despair, unwillingness to live, sadness and longing, in a scientific manner, to suicide. What kind of Pushkin is here? The fears of parents for children are forced to allow children to do everything: what would the child not amused, just not hung.

But there are higher feelings. If the lower ones are also inherent in animals (the dog wags its tail in pleasure and bites in anger), then the higher ones are inherent in a person, these are feelings of awe before shrines, this is sacrifice, this is compassion. And if you do not raise them in man, he will differ very little from the animal. And it is precisely to the development of low-level feelings that today's school is subordinated to. Is it clear to officials living by turning children into imbeciles, or to continue? There is no need for reading - there is no development of the mind and growth of the soul. There is no book in his hands - a person is missing, he is an iPhone, an IP, a blogger. If the official of the ministry, speaking, says: “As the president said,” then you understand that they live in their erf. There they are well, there they are hampered by one thing - the public. But you can not listen to it, you can also lock it, close the windows, turn on the air conditioning.

At the same time, we see that if the government listens to the people, then the people support it. But in the teaching of language and literature, we are stumped. Although shouting screaming: how much can you prove that the exclusion of essay and oral examination in literature dramatically lowered the literacy of the youth, and in general the ability to think. So this is what the officials are trying to achieve. But in a Christian way, we say: "God bless them with health, and for us patience."

Below are placed poems already as an appendix to the conversation about language and morality. Devilish flat gaze round the clock continues to irradiate us with the radiation of debauchery, vulgarity, violence, obscenities, foal humor and constant lies and lies. And who is the father of lies? Remember the gospel. So, whose kids are TV people?

In the middle of 90's, Vadim Kozhinov and Ksenia Myalo and I published the “Writer's Diary”. Only three issues appeared, Diary did not reach the readers, the publishing house was covered up. In one of the issues I put my translation of the poem of the national poet of Belarus Nil Gilevich “Dokul zh?”, That is, “How long?” It is about Russian television. It's time to quote it:

Unhappy people of a great country,
Or our souls have become dark dark
Ile heart withered, or the blood subsided,
With so many years we look numb,
As with the TV screen with gum relish
Besovsky folk us foolishly fools us
Trash, as if the place is empty
All that has always been sacred to us.
Decency is forgotten in the enemy camp.
On TV,
There are many actors and farce and drama:
Manifestations, paskudniki, cynics, boors.

I can't wait, maybe today
Seeing with the peasant, not with the pivot,
Ile in the workshop with the worker, with bright love ...
No, again about gold dyed with blood.
But where is Kupala, where is Pushkin's thoughts,
Where are the thoughts of Shevchenko?
No, looming again
Vulgarity clouds, violence and lies,
And an abomination, and lust, and a bullet, and a knife.
What is there Kupala, what is the people there!
In the screen, like a freak creeps into the window.
Taunt, mockery of every ad.
Manifesters, paskudniki, cynics, louts!

How long is this filth? And who is she glad?
You, the new owner, or you, Democrat?
You, those who are behind the glass screen
Laugh at us too late and early
And you do not pointer neither honor nor laws,
What are you laws, the judges are familiar to you.
You dance - your native country groans,
But soon your Satan will also cry:
The people will rise, the chimeras will disappear,
Rise on the stone of culture and faith.
Then they will run to hell, beating their hooves
Manifesters, paskudniki, cynics, louts!

Oh, not everything is in order, not only in the Danish kingdom, but also on Russian soil. Here, I said about the Danish kingdom, but very few will understand me already, for this is a quote from Hamlet, and who needs Shakespeare now? Only the directors of the theater, and only in order to spoil it. Already, “Oblomov” put now that Oblomov and Zakhar are same-sex partners.

Scary for children, scary. But you, confidants of depravity (where is the quote from?), Do you know what God's judgment is? But it is necessary, it is very necessary that the court and the criminal should overtake you. You deserve it long ago.

Ctrl Enter
Noticed oshЫbku Highlight text and press. Ctrl + Enter
We are
About Stalin and KhrushchevWhat you didn't want to know about England
Military Reviewin Yandex News
Military Reviewin Google News
62 comments
Information
Dear reader, to leave comments on the publication, you must to register.