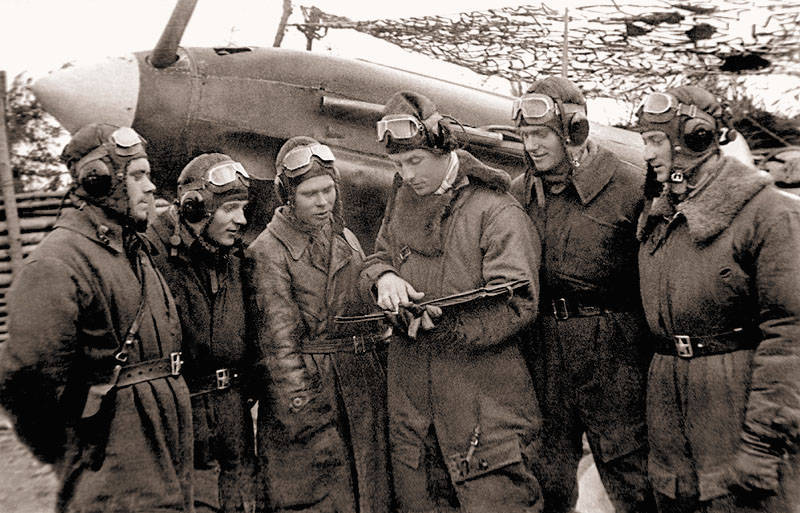 The theme of the loss of the German Luftwaffe on the Soviet-German front for many years now has not lost its popularity. How many copies have already been broken, how many authorities have been overthrown in this field, and this topic still remains topical.


Since not all readers are familiar with history first of all, let us briefly highlight the situation with the documentary base on the losses of the Luftwaffe, which is currently available to Russian researchers.

First, the so-called reports of the 6 th department of the service Quartermaster General Luftwaffe (hereinafter referred to as their FCL reports), which controlled the losses *, were introduced into scientific use. This, in principle, is the main source of information on the topic of interest to us. The reports reflect the time, place, actual or suspected causes of death or damage to the aircraft, the fate of the crew. These reports have been fully preserved from the beginning of the war to the end of 1943, partly for 1945. And they are practically lost for 1944 of the year **. Of course, like any operatively filled out document, these summaries have their drawbacks: errors or elementary errors, sometimes a large time interval between the event itself and the moment of making the record. On the features of accounting for losses in them, we dwell below.

Secondly, some gaps in 1945 close the detailed daily reports of the 6th Air fleet Luftwaffe. Of course, the 6th Air Fleet operated only on parts of the Soviet-German front, but this is a very significant part ***. 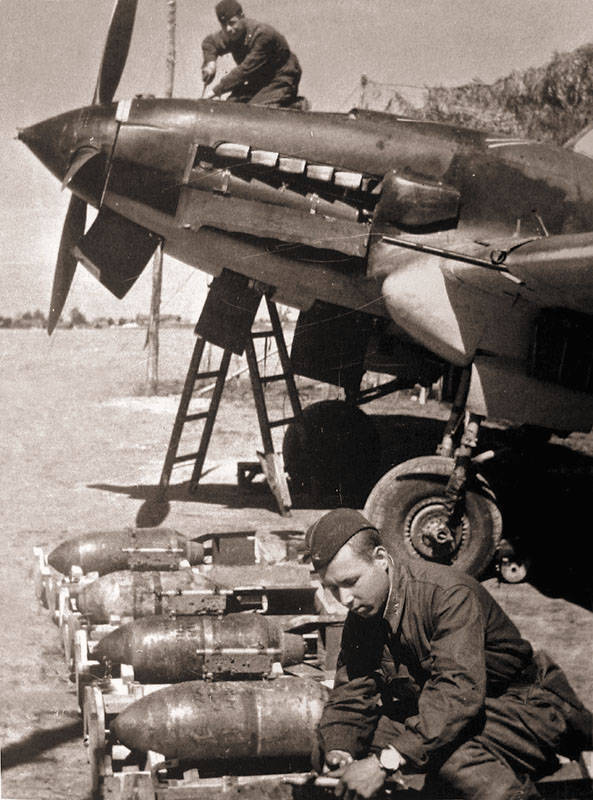 On this large arrays of archival documents of the Luftwaffe both in terms of losses and operational ones in general, are exhausted. In contrast to the archives of the Ground Forces and the Kriegsmarine, the archival funds of the German Air Force are by now very poorly preserved. Based on this fact, we finally move on to the third array of documents. These are documents of the Land Forces and the Navy of Germany.

Information on the actions of the Luftwaffe has been preserved in these funds in two ways. First, as independent reports or reports sent to the appropriate headquarters by an Air Force ****. Secondly, as a reflection of the air combat in documents of the army or naval units and formations themselves.

* - For the Russian-speaking reader, selections from these documents are available, posted on the Sky Corner website at http://www.airwar.ru/history/av2ww/axis/axis.html#Poteri. While these samples are not complete, but, ideally, all available documents will be processed.
** - Military archive of the Federal Republic of Germany RL 2 III / 1177-1197, 1199
*** - National Archives of the USA NARA T-321 roll 17, 19, 50, 51
**** - There was a full-time Luftwaffe liaison officer position at German headquarters

In the light of the topic touched upon by us, the reports of the army (or sailors) on the results of the Soviet air force raids on Luftwaffe-based airfields are interesting. Of course, there can be no talk of a complete processing of the entire array of documents of the army and navy, because of its array, immensity. However, some conclusions from the comparison of documents of different types of armed forces of Germany can be done.

The first conclusion that we have the right to draw concerns the systematic understatement by the Germans in the reports of the Quartermaster General of the number of damaged aircraft. The second conclusion is more cautious. It is possible that the same thing was done with regard to irretrievable losses. aviation technicians at airfields.

Attack by IL-2 attack aircraft of the German airfield

In confirmation of our assumption, we give three examples of how the successful attacks of the Red Army air forces on Luftwaffe airfields were reflected in German documents. All three examples are taken from 1941-1943's, i.e. from the period in which the GKL reports can be considered more or less complete.
The most significant example of discrepancies in information about losses in German documents took place in 1941. Why indicative? For several reasons. First, the 1941 year is most well reflected in the GCR reports. If, for example, for the 1943 of the year, some episodes of the air war could get into the lost 1944 records of the year *, then for the first year of the war this probability is minimal.

The events to be discussed occurred in November 1941 of the year on the Leningrad front. On the eve of the October holidays, the Lenfront command received intelligence data on the alleged German 7 November raid on Leningrad. It was decided to preempt the enemy, the first to strike at the Siverskaya airfield.

In 11.25 6 on November 7, seven Pe-2 from 125-BAP (the leading regiment commander, Major VA Sandalov), accompanied by ten MiG-3 fighters from the 7-IAP, attacked the landing of German aircraft. "Pawns" dropped 28 ZAB-100, 210 8-kilogram fragmentation and 280 2,5-kilogram bombs (fragmentation and incendiary) to the airfield XNUMX.

The Germans obviously missed the raid. According to the report of our pilots, anti-aircraft artillery fire was opened late and unorganized. In 10.40, nine N-153s from the 7-IAP were attacked by firing points on the outskirts of the airfield. On departure, our pilots were fighting with the "Messerschmitt". Lieutenant Timoshenko and Junior Lieutenant Stoletov did not return from battle, the first one died, and the second one was captured. 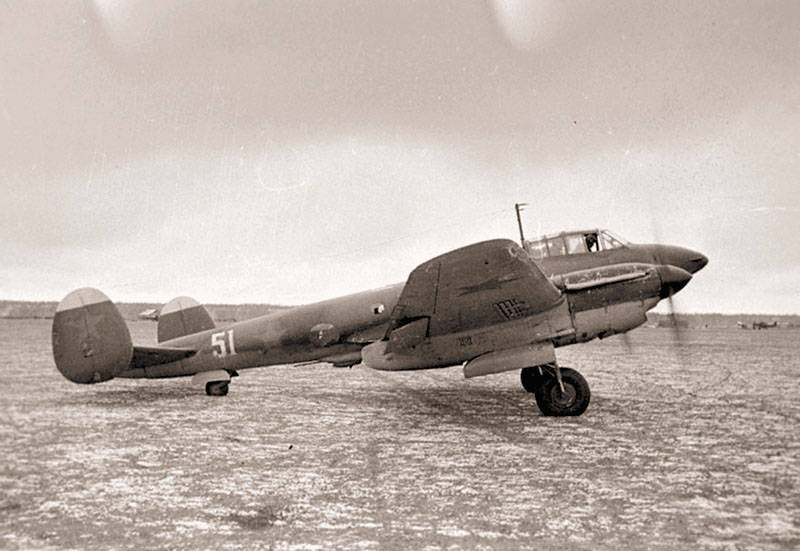 GKL summaries draw the following picture of the results of the raid of our aircraft. Destroyed (loss of 100%) two “Junkers-88” (serial number 2543 from III./KG77 and 1256 from KGr806), another one damaged (60%) and was subject to write-off (serial number 3542 from III./KG77). Three aircraft from the 806 group are damaged (40%), but could be restored (serial number 1081, 2501 and 4547). Thus, under the most advantageous scenario, three enemy bomber were destroyed, three were seriously damaged. In addition, two pilots from the 77 squadron, one military builder and one anti-aircraft gunner ** were injured.
And this is how the events of November 6 are reflected in Siverskaya, in the "Journal of the 18 Army's Combat Operations" ***.
“6 November 1941 of the year, 15 hours 20 minutes.

The Luftwaffe liaison officer reports the results of today's raid on the Siverskaya airfield. In 10.15, nine enemy fighters flew onto the airfield. At 10.30, at a height of 200 meters above the airfield, seven bombers passed under the cover of fighters and immediately behind this seven attack aircraft. Aircraft dropped thirty bombs from the flight of flight. Six were destroyed, four were seriously damaged and eight were easily damaged. Personnel casualties: two dead and two wounded. 20 burned thousands of liters of gasoline.

Two duty fighter jets took off in alarm and shot down two enemy planes in pursuit.
It was later established that the irretrievable losses amounted to five cars.

21 hour 35 minutes.
The Luftwaffe liaison officer told the head of the operational department of the army that in the second half of the day the enemy had re-raided the Siverskaya airfield. Destroyed one, seriously damaged one and easily one aircraft. Also received damage "Physicaler-blinds". 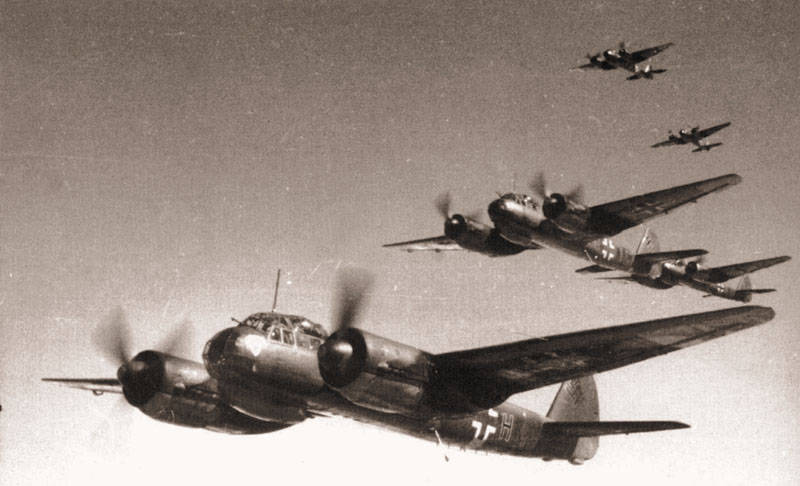 Fast forward to 1942 year. The Far North, a very successful raid of IL-4 bombers on Banak airbase in Northern Norway as part of the operation to escort the infamous PQ-17 convoy.

On June 30, the five Ilyushins from the 35 th mine and torpedo aviation regiment who had recently arrived in the Northern Fleet dropped thirty high-explosive “one-hundred-square” aircraft into the parking grounds of the German airbase. According to crew reports, the entire airfield was covered with gaps. Severomorsk did not suffer losses, and upon returning they reported on the destruction of two enemy aircraft as a result of a bomb attack, which were identified as BF-109 “Messerschmitts”. However, this is the rare case when their undoubted successes in the reports “upward” were underestimated.

Here is what you can learn about this in the Kriegsmarine documents:
“June 30, 9 hours 1 minutes / 9 hours 3 minutes.

The enemy learned from the events of 30 June, so the next raid on Banak on July 2 was no longer so successful. On the bombing of the airfield, this day two IL-4 groups flew out. The first five returned from the Varde area due to a malfunction of the engine of the leading aircraft. Of the four “Ilyushins” of the second group, one aircraft broke off into the clouds and also returned to the airfield. The remaining three DB-3f continued their flight to the target, dropping thirty FAB-5500 to the airfield from a height of 100 meters. At the moment our bomber departed from the target, a pair of Messerschmitts appeared in the air. Within a few minutes, they successively shot down the DB-3f commander of the newly arrived 35-th MTAP to the North. Krylov and the commander of the 2 guards regiment of captain P.D. Zubkov. The third crew, despite the numerous holes of its "Ilyushin", managed to escape. 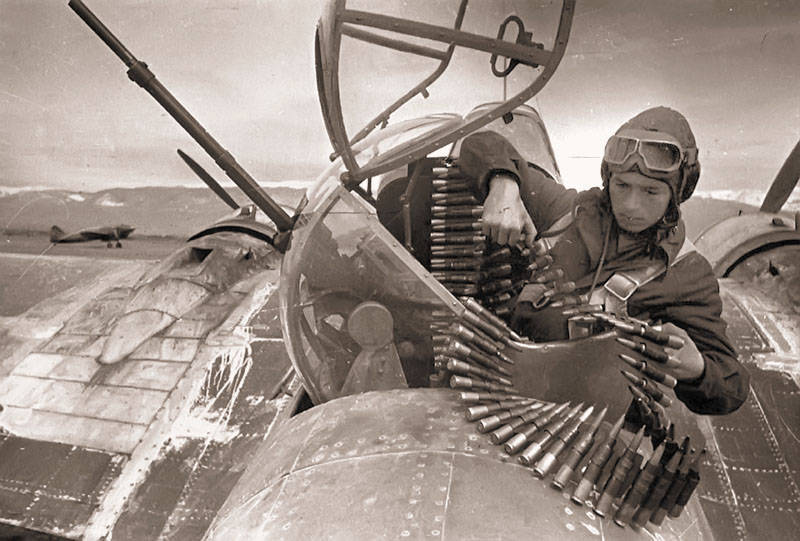 Loading the 12,7-mm ammunition unit of the UBT machine gun by the gunner-radio operator from the IL-4 of the Northern Fleet

This time, the GKL reports on the results of the raid keep deathly silence. But the information we were interested in was found in the “Admiral of the Polar Sea” combat magazine ****:
"July 2, 3 hours 00 minutes
The air raid on Banak. Four aircraft type DB-3. 4500 height meters. Eight bombs caliber 500 kg dropped. One container with 33 small bombs did not explode. At the airport, damaged five aircraft. The Luftwaffe shot down two bombers reliably and two allegedly. ”

Now let's fast forward to 1943 year, on the southern flank of the Soviet-German front. Here is what the Wehrmacht 6 Field Army headquarters reported on the results of a Soviet air raid on the Kuteynikovo airfield, in the air situation report of the 15 Luftwaffe anti-aircraft artillery division on July 14 of the year *****:
“Preliminary loss report.
Nine cars are easily damaged: four “Focke-Wulf-189”, one Me-110, one W34, one “cleat” and two “Physi-detectors”.
Two cars are heavily damaged: Me-110 and Fw-189.
One of the “Physiciler-Blinds” has been destroyed
One soldier killed, two seriously injured, two buildings destroyed. ”

As can be seen, the coincidences between these two documents are minimal. Fw-189А-2 from the GCR report can be assigned only to lightly damaged cars, and the “stork” is not at all clear in which category to write. On the one hand, it was seriously damaged and required factory repair. On the other hand, it is not indicated in the army report how seriously injured. As the only possible justification for German staffers, it can be assumed that the information on the raid on Kuteynikovo eventually migrated to the reports for 1944 a year later lost. But this is just a guess.

We add that, unfortunately, we have not yet been able to establish precisely the “authorship” of the raid on the Kuteynikovo airfield from the Soviet side. It is clear that these were not long-range Aviation heavy vehicles, so it is possible that the pilots of the 8 Air Force have achieved success.

Thus, it can be stated that today there are no absolutely reliable sources for the losses of the German Luftwaffe on the Soviet-German front. At the same time, there is a “growth” of losses in the documents of the German Ground Forces or Kriegsmarine, which are not connected with the Luftwaffe. Therefore, apparently for quite a long time we will have to be content with the next “approaching” to the disclosure of this topic, and not “the ultimate truth”.

Ctrl Enter
Noticed oshЫbku Highlight text and press. Ctrl + Enter
We are
Diplomats of the People's Commissariat of Defense: on the eve and during the warMilitary Intelligence in the Battle of the Caucasus
Military Reviewin Yandex News
Military Reviewin Google News
154 comments
Information
Dear reader, to leave comments on the publication, you must to register.