18 2013 June
77
Two large space companies from the United States continue to quarrel over the Russian rocket engine RD-180, which is produced in the Moscow region at NPO Energomash and is intended for middle-class launch vehicles. The US antitrust services suspect the United Launch Alliance that it does not give its competitor, Orbital Sciences, the ability to purchase these engines for its Antares rocket. The US Federal Trade Commission has already initiated an antitrust investigation into a joint venture between Boeing and Lockheed-Martin corporations United Launch Alliance (ULA), which is developing missiles and putting satellites for near-Earth satellites for state forces.


The United Launch Alliance is suspected of illegally denying its competitors access to critical parts from contractor RD Amross. And this, in turn, deprives competitors of the opportunity to fully participate in tenders. It is reported by Reuters, which has at its disposal documents of the US Federal Trade Commission. RD Amross is a Russian-American joint venture that brings together NPO Energomash and the American company Pratt & Whitney Rocketdyne. The first is engaged in the production of RD-180 engines, and the second is supplying them to ULA for their Atlas launch vehicle.

According to American experts, the Russian-made RD-180 engines, by their combination of characteristics, are the only alternative for heavy launch vehicles that are able to put American reconnaissance and military satellites and NASA satellites into near-earth orbit. At the same time, ULA is preventing RD Amross from selling RD-180 rocket engines for launch vehicles from other manufacturers, including Orbital Sciences, which is keen to get into the lucrative space launch market in the interest of the American government. 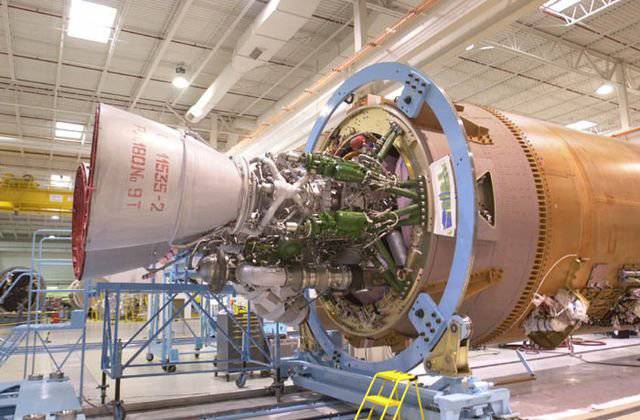 Orbital Sciences is currently competing with the United Launch Alliance. It notes that without the possibility of using Russian RD-180, the only liquid-fuel rocket engine that is optimally suited for their Antares launch vehicle, they lose the opportunity to win government tenders, and therefore gain access to profitable orders.

Currently, the Antares 1 stage of the medium-class launch vehicle is equipped with Aerojet AJ-2 26 liquid fuel engines. These engines are a modification of the engines NK-33 production SNTK them. Kuznetsova, which were also created during the Soviet era. These rocket engines were developed for the super-heavy H-1 rocket, but this project in the 70-s of the last century was closed along with the Soviet program for the conquest of the Moon. Thus, both American companies use Russian rocket engines for their own purposes. Orbital Sciences for its Antares rocket (created with the participation of the Ukrainian design bureau Yuzhmash and Yuzhnoye) - the Russian NK-33 engine, converted and received the new name Aerojet AJ-26, and ULA uses the RD-180 engines for its Atlas rockets collected by NPO Energomash (Khimki).

According to Reuters, the US antitrust services have begun an investigation due to unsuccessful attempts by Orbital Sciences to buy RD-180 engines for its new Antares middle-class rocket. Earlier, Orbital Sciences has created its own rocket with a Russian engine to implement the contract with NASA for the delivery of cargo into near-earth orbit. The total amount of the transaction - 1,9 billion. Before 2016, the company must carry out at least 8 space launches of Antares rockets to the ISS with various cargoes in the interests of NASA. Antares carrier rocket will launch cargo weighing up to 7 tons to low orbits. The first demonstration launch of the Antares rocket and the cargo spacecraft Cygnus was performed at the end of April 2013 of the year from the launch site on the island of Wallops (Va.). 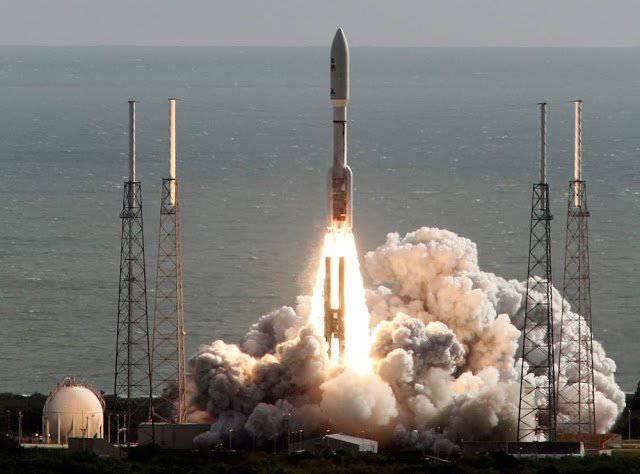 “The Aerojet AJ-26 engine is a reliable and very good rocket engine that has only one problem. These engines no longer produce. The existing Aerojet AJ-26 Orbital Sciences engines should be enough to fulfill their obligations to secure a NASA cargo delivery contract to the International Space Station. But after the end of this contract, the company, of course, would like to receive new orders for commercial launches. For this, Orbital Sciences would be more suited to the RD-180 engine, ”said Yury Karash in an interview with the Vzglyad newspaper, a corresponding member of the Russian Academy of Cosmonautics. Tsiolkovsky. At the same time, it is clear that the ULA alliance, which is currently actively occupying the leading positions in the provision of launch services, is not very happy about the possible prospect of a competitor entering the market.

Reuters industry experts believe that Orbital Sciences needs access to Russian RD-180 engines for its Antares missiles in order to simply survive in the market. Orbital Sciences does not plan to compete with the United Launch Alliance in the field of heavy rocket launches, but the company expects to become a full-fledged player in the market for medium-sized cargo delivery to space using Antares launch vehicles. And for the American government such cooperation could be beneficial, since the Antares rocket costs less than 100 million dollars.

Jessica Rye, a spokeswoman for ULA, confirmed that an investigation is indeed underway and that the company is working with US competition authorities. The same was confirmed by the press service of Pratt & Whitney. According to Jessica Rye, the United Launch Alliance contracts for the purchase of RD-180 engines are absolutely legal and comply with all competition rules. In turn, the Federal Trade Commission declined to comment. 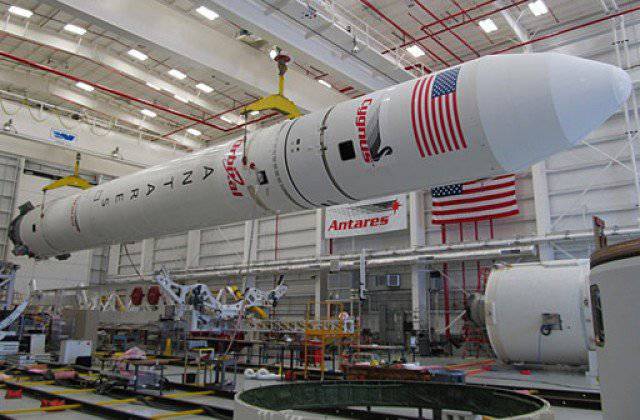 The Russian rocket engine RD-180, because of which American companies are currently quarreling, won the tender announced by the USA against American and one European company 90-s in the middle of the 2-s of the last century. The RD-180 engine was designed based on the RD-170 rocket engine used on Zenit and Energy launch vehicles. The engine is fully assembled at NPO Energomash. At the same time, combustion chambers in Khimki are supplied from Samara, and special steels - from Chelyabinsk. The technological cycle of assembling only one engine takes on average up to 16 months.

RD-180 is a two-chamber engine with oxidizing generator gas afterburning, with thrust vector control due to swing of each chamber in 2-x planes, with the possibility of deep throttling of the rocket engine thrust in flight. The engine design is based on well-tested elements and designs of the RD-170 / 171 engines. The design of a powerful new engine for the 1-th stage of the launch vehicle was carried out in a short time, and testing was done on a small amount of the material part. 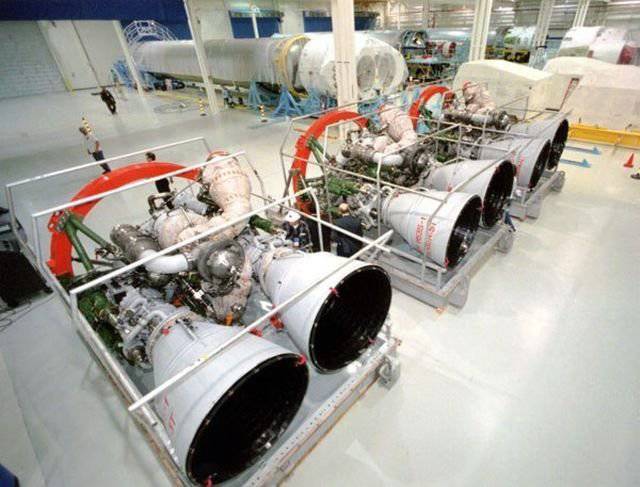 During the period from 2014 to 2017, the Energomash enterprise from the Khimki engine-building company expects to export X-Rum-29 rocket engines to the US 180, executive director Vladimir Solntsev told reporters about this. “We are currently working on the issue of supplying the next 29 rocket engines RD-180 from 2014 to 2017, respectively, the load for our company will be 4-5 engines per year,” said Vladimir Solntsev.

Vladimir Solntsev reminded reporters that an option had already been signed for the delivery to the US of an RD-101 180 engine intended for the American Atlas missiles, the option was calculated up to the 2020 year. At the same time, 59 engines were installed in the USA, of which 38 had already successfully launched Atlas-5 rocket into orbit. At present, work is continuing to expand further cooperation.

Solntsev added that before 2010, the RD-180 was sold to Americans at a loss for a Russian enterprise, since the cost of their production increased at a higher rate than the price at which they were able to sell them. But, according to Vladimir Solntsev, in 2010-2011, a number of measures were taken that corrected this situation. Today, the company sells engines in the United States at a price almost 3 times higher than in 2009 year. For this reason, the company reached a positive return on sales, which allows part of the proceeds to spend on the development of its own production base.

The main characteristics of the RD-180 rocket engine: