The concept of combining aircraft with the train: Clip-Air

18 2013 June
17
The Clip-Air aircraft project was created at the Federal Polytechnic School in Lausanne, starting with 2009. The aircraft model with a wingspan of 1,2 meters will be shown to the public for the first time at the anniversary air show at Le Bourget, which began today, June 17, 2013. In this case, the plane looks more than unusual. Clip-Air consists of a carrying part, the so-called “flying wing” with engines, fuel tanks, chassis and cockpit and transport capsules attached to it, which can accommodate both cargo and passengers. In total, under the wing of the aircraft can be placed up to 3-x "capsules" approximately 30 meters long and weighing up to 30 tons each, with a total capacity of up to 150 passengers.


This concept could be born only in Europe. Though aviation transport here is quite well developed, at short distances for convenience and sometimes speed it can easily be inferior to railway transport: after all, you must first check in at the airport, get to the airport by something, and leave the arrival airport in the same way . All this, as well as possible delays in getting baggage, can eat a lot of time, so if you make a trip closer than 1000 kilometers, using high-speed railway transport looks like a more convenient alternative.

Those people who follow the development of modern transport, most likely, saw various hybrids that combine a plane and a helicopter or a car and a motorcycle. But the Swiss engineers from Lausanne decided to go even further and combined two, at first glance, completely opposite ways of transporting goods and passengers - they tried to combine the plane and the train. The concept of a completely new vehicle, called the Clip-Air, is a very large aircraft that has not one, but three capsule bodies at once. Each of these capsules can be filled with passengers or cargo separately, and then attached to the general basis of the aircraft - the “flying wing”. 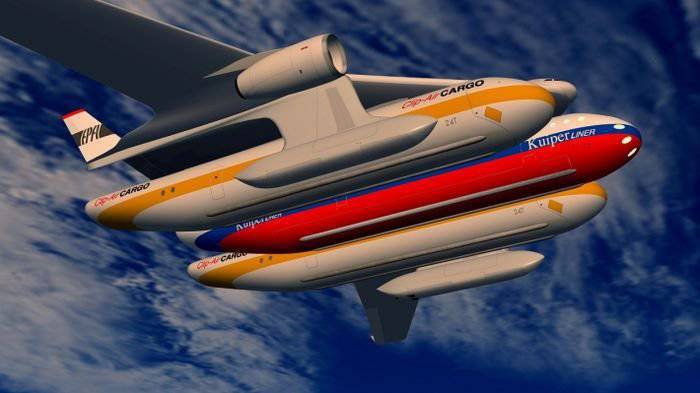 The creators of Clip-Air are now comparing their invention with a train that can cruise not across ordinary rails, but across the sky, while capsules in this type of transport will play the function of railroad cars. In the concept proposed by the Swiss inventors, it is remarkable that these capsules can also play the role of ordinary rail cars. Capsules can be filled with passengers at railway stations, and not at airports. This innovation, as well as the significantly increased capacity of the airliner, will make it possible to make flights with Clip-Air much cheaper than even on the most economical models of modern aircraft.

Arriving at the destination airport, Clip-Air unhooks the saloon car from itself, after which they are transported by rail to the usual railway stations, without making transfers, checking baggage and other horrors of standard airports. Concept developers recognize that their project is currently quite futuristic, and in order to embody it in metal and put it on the wing, they will have to overcome a number of complex technical barriers, but at the same time the Swiss believe in the future of their proposed concept, which runs counter to canons of modern aircraft.

There is nothing strange in this, the concept has a number of advantages. Firstly, the proposed concept is quite convenient. Passengers of such an aircraft will be able to get into wagons at railway stations, even in relatively small settlements, and then arrive by rail at major airports, from where (without numerous checks and tedious transfers) they can continue the journey in the same wagons, but by air. In addition to the struggle for the convenience and speed of movement of passengers and goods, this project offers significant benefits in terms of cost. 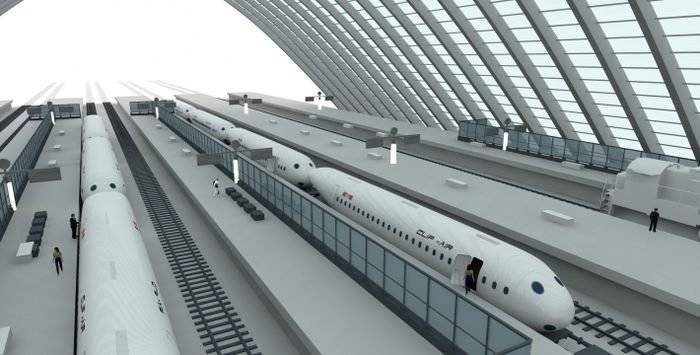 One “flying wing” will be able to work at once for several different airlines or their consortium, taking on flight “capsules” and not standing idle while waiting. This vehicle, as a matter of fact, can transport cargoes and passengers of 3's companies directly under one wing. Which, which is also quite important, will be able to rent the plane, rather than acquire their own aircraft, in this case, individual capsules.

Secondly, in a similar plane-car, instead of people, you can place a very large gas tank. The latter is quite important: aircraft built according to the classical scheme have too small internal volume in order to transport prospective gas fuel through the air. For example, the Tu-155 still in the 1988 year could fly on liquid hydrogen, while in theory nothing could prevent the use of airliners on liquefied methane, which today has become a cheaper type of fuel.

As practice has shown, the tank for liquefied gas does not matter which one, it turned out to be quite difficult (almost impossible) to place in the wings of an airplane - ordinary cars have just too little free space. At the same time, placing the tank in the fuselage almost in 2 times reduced the passenger capacity of the experimental aircraft Tu-155. However, the layout of the flying wing is quite suitable for these purposes, since most of the volume when carrying out flights on liquid fuel still remains unclaimed. In theory, even the most ordinary liquefied methane nowadays costs several times cheaper than fuel derived from oil, and the existence and production of shale natural gas suggests that in the foreseeable future the situation is unlikely to change for any reason. 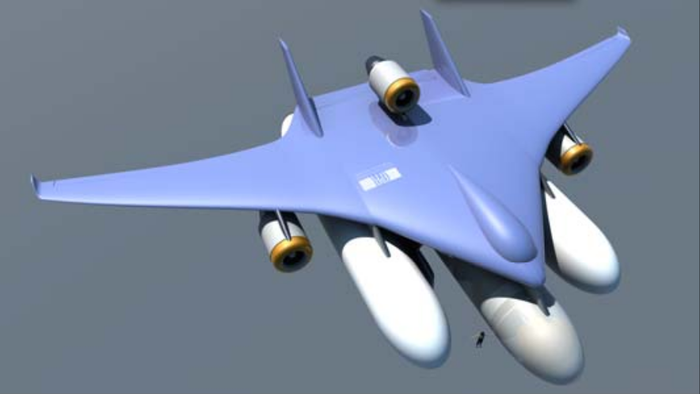 Thirdly, according to Swiss developers, Clip-Air will be able to solve an important enough task that was set by ACARE (European Advisory Council for Aeronautical Research): to reduce the amount of CO2020 emissions by 2 right away by 50% during air flights ( in terms of the length of the route and the number of passengers). A three-engined plane-wagon Clip-Air will be able to carry just the same number of passengers as an 1 twin-engine A3 aircraft in 320 flight. When flying over a distance of more than 4 thousands of kilometers, fuel savings (and emission reductions) will be very significant, lower than those of three twin-engined Airbus. In addition, the aircraft makers are considering the possibility of using biofuels and liquid hydrogen instead of traditional types of aviation fuel.

With all the economic and environmental advantages of the Swiss project, there are also enough difficulties and they are quite obvious. Aerodynamics 3-x capsules, fixed under the general flying wing, will be worse than the standard single-bodied aircraft, designed according to the classic layout. Of course, this is amenable to optimization, but, according to the creators of this project, optimization is still far enough from the end.

Serious enough is the problem of the landing gear. Ordinary projects of a flying wing (without the use of suspended car parlors) often involve the use of an air cushion. Although the idea, which was implemented on Pe-2 and UT-2 aircraft, demonstrated the ability of such aircraft to land even on water or in the tundra, classical aircraft have too little space that would be convenient to accommodate such a chassis. In theory, the flying wing of such areas is much more, while the overpressure in an air cushion in this particular case may be insignificant. However, Clip-Air will not be so easy - the use of an air cushion is hampered by suspended “fuselages” with people and cargo. 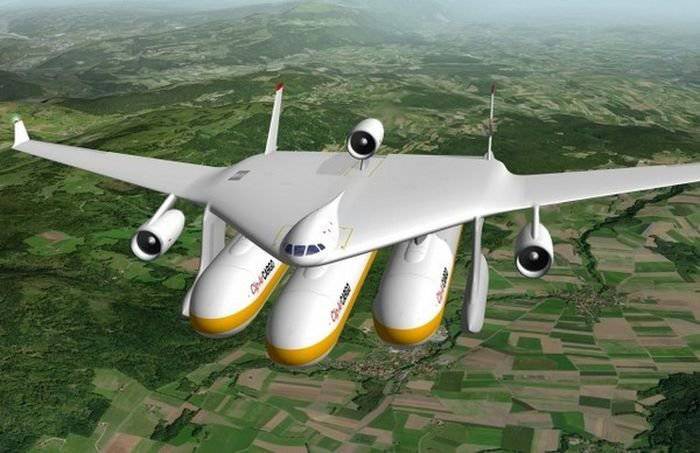 Therefore, the Swiss design chassis mostly conventional scheme (16 wheels), which will be suspended in special nacelles, located on 2-x well-developed pylons, which are located between the exterior passenger compartments and side engines. It is quite obvious that the resistance of such a chassis will be comparable to the “bast shoes” of the famous Ju-87 and is unlikely to have a positive effect on fuel consumption, although it will not override all the economic benefits of Clip-Air.

The general strength of the proposed design also raises questions: the fastenings of passenger and freight-wagons must have a very significant margin of safety; It will also require a significant strengthening of the flying wing itself in places of similar interfaces. Of course, the total weight of the structure will depend on the specific materials and decisions that the developers choose, but today it is clear that creating an equally strong structure will require greater sacrifices than the aircraft of the classical scheme or the classic flying wing. Finally, for a good, confident control of such a complex flying wing, effective electronics assistance will be needed: it will be quite difficult for a human pilot to maintain Clip-Air in the air and to maintain its stability. However, this obstacle in the past few decades has already learned to overcome.

In general, it is still too early to talk about what exactly will come out of this project. Too many things are still to be created and refined. So far only the 1,2-meter layout, which is presented in Le Bourget. However, the ideas of multimodality and modularity, which are already incorporated in this project, are potentially quite interesting and with a decent design implementation they will be able to make a real revolution in modern air transport.