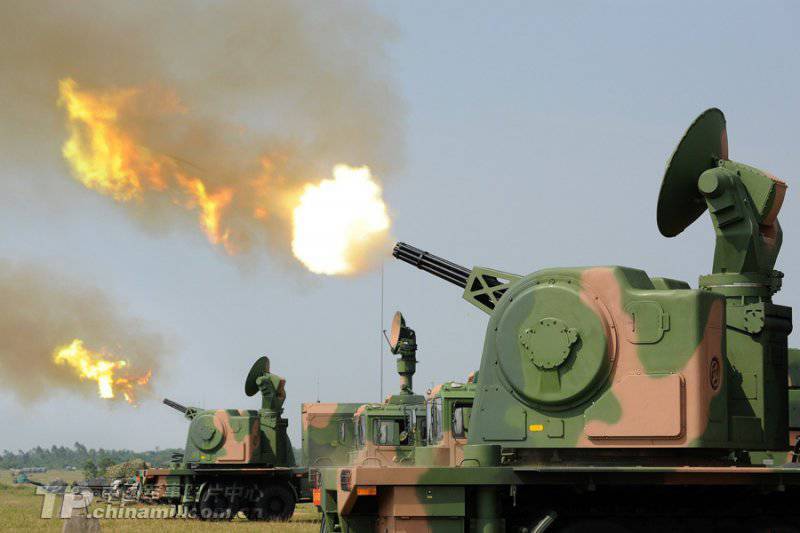 In the middle of the last decade, the leading Chinese manufacturer of weapons and military equipment, the company NORINCO, created and tested a new self-propelled anti-aircraft gun designed to provide anti-aircraft defense of stationary objects. A new combat vehicle was supposed to protect airfields, headquarters, logistics centers, etc. Moreover, the possibility of escorting troops on the march was not considered. The new LD-2000 wheeled chassis (also called Ludun-2000) was only needed to move from position to position. 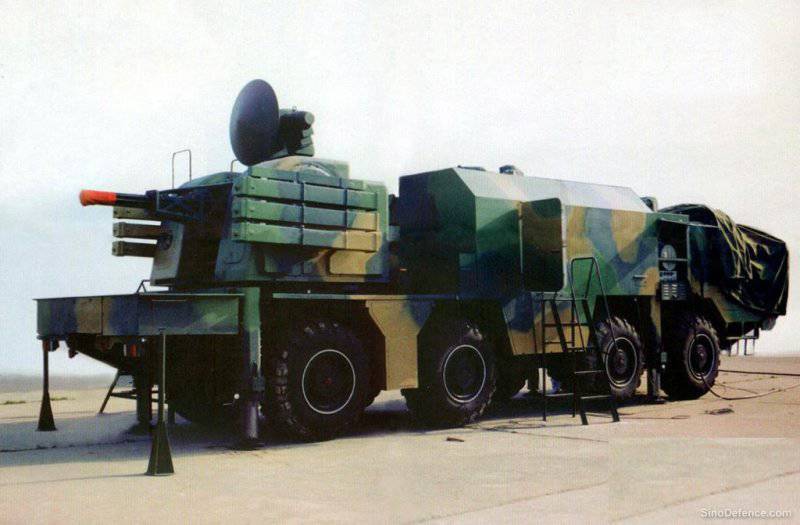 Despite this approach to the use of the new ZSU, Chinese designers have equipped it with off-road chassis. The basis of the combat vehicle was the eight-wheel-drive all-wheel drive car Wanshan WS-2400, which is a copy of the MAZ-543. With such a base, self-propelled self-propelled guns are able to make marches along the highway and, if necessary, on dirt roads or rough terrain. When preparing for duty or shooting, the combat vehicle will fall on four outriggers, which allows it to maintain stability during a fire. It is this feature of the new ZSU that did not allow to make it an element of the military air defense. However, the impossibility of firing on the move or without relatively long preparation did not prevent the offer of LD-2000 for use in the defense of stationary objects.

A platform with a set of special equipment is installed on the WS-2400 base wheeled chassis. In the front part there is a large armored superstructure, inside of which is located the operator's cabin, an auxiliary power unit with a generator, electronic equipment, etc. For access to the cabin on the right side there is a door. The exact composition of electronic equipment is unknown, but there is some information about its architecture. The LD-2000 combat vehicle has its own XX-NUMXG type target tracking radar, which is used for aiming the gun. It also provides for the transfer of data from other machines, which makes it possible to incorporate Zyu Lyudun-347 into a single air defense system. 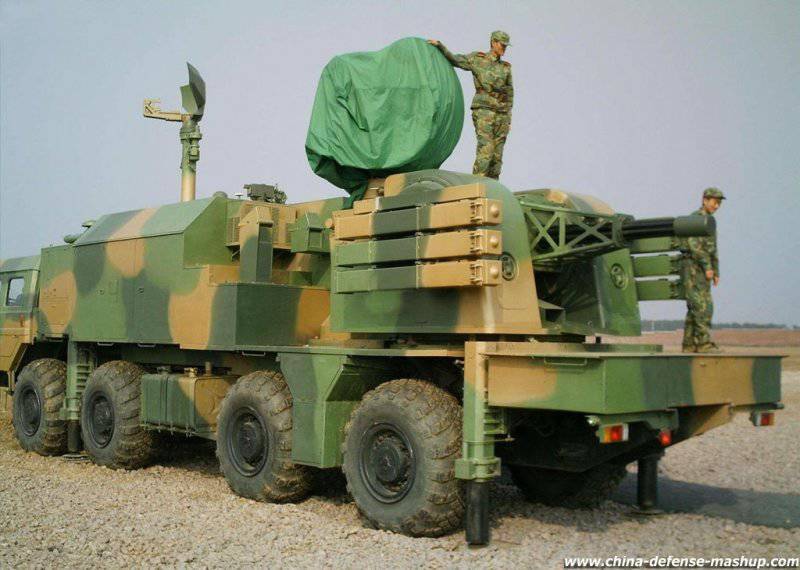 At the rear of the platform is a rotary machine with a seven-barrel 30-mm gun "Type 730". According to reports, this unit is the Chinese version of the Dutch complex Goalkeeper, and the gun can be a copy of the American gun GAU-8 Avenger. Based on this information, you can make an assumption about the characteristics of the instrument. The original GAU-8 gun has a firing rate of at least 4000-4500 shots per minute, and the installation can direct weapon at a limited angle in the horizontal plane and from -10 ° to 80 ° in the vertical. Accurate data on the possibility of shooting "through the cabin" no. Due to the large superstructure, the firing zone in the forward hemisphere is markedly limited, which makes it possible to doubt such possibilities of the self-propelled self-propelled gun. 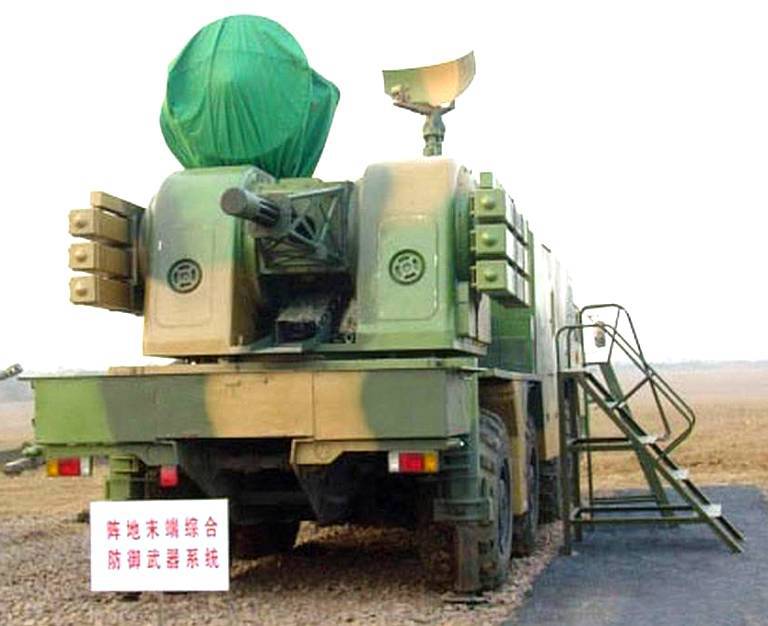 In the rotary gun installation, on the sides of the gun, there are two boxes for ammunition. Each of them fits 500 shells. The supply of ammunition to the gun - bezlevyevaya. According to some sources, armor-piercing piercing shells are stacked in one box, and high-explosive fragmentation shells are stored in the second. Thanks to the choice of ammunition supplied, the LD-2000 combat vehicle is capable of striking a target with a projectile of the type that will be most effective in this situation. The radar tracking antenna is located on the upper part of the rotary unit. It rotates with the installation itself and is used exclusively to collect information on the movement of the target. The ZSU cannot independently find targets at a long range and therefore has to use external target designation or an optoelectronic station mounted next to the antenna with a thermal imager and a laser range finder.

In the early prototypes of the Lyudun-2000 ZSU, modules for anti-aircraft guided missiles were installed on the sides of the rotary unit. On the characteristic nodes of the suspension, three transport-launch containers with TY-90 missiles were suspended from each side. Subsequently, for technical reasons, they were abandoned, which is why the LD-2000 became a pure gun anti-aircraft system. The use of missiles could increase the range to 5-6 kilometers, but due to the abandonment of guided weapons, this parameter currently does not exceed 2500-3500 meters. Thus, the self-propelled anti-aircraft installation LD-2000 is able to protect objects only from some targets that managed to break through other means of air defense.

The announced structure of anti-aircraft batteries, armed with a new ZSU, speaks directly about the intended course of their combat work. So, for six combat vehicles with guns, there is one vehicle with a radar detection system and data transmission equipment. If necessary, the battery can quickly go to another position. In this case, no more than three ZSUs are removed from the combat position and go in the right direction, while the remaining machines, including the control machine, remain in place and continue their work.

At the end of the two thousand years, the self-propelled anti-aircraft installation LD-2000 was adopted by the Chinese army, at the same time began mass production of combat vehicles. The exact number of built self-propelled guns, as well as the pace of production, were not disclosed. The same applies to the placement of batteries armed with them. It is reliably known only about the operation of LD-2000 in the Hong Kong garrison of the People’s Liberation Army of China. This information has been made publicly available due to the fact that the transported equipment has got into the lens of journalists. Other data of this kind remain secret.