18 2013 June
67
The Chinese aircraft carrier program is gradually gaining momentum. Although it is still far from the commissioning of a new Chinese aircraft carrier, more and more new messages are already being received regarding the relevant projects. Not so long ago, Chinese shipbuilders reported the start of research and design work in the field of naval nuclear reactors. This news It was received unequivocally: China is preparing to build an atomic surface fleet and, first of all, aircraft carriers with a nuclear power plant. The timeline for the start of construction of such ships, for obvious reasons, has not yet been named, and probably has not even been defined yet, but the relevant works have already started.


The other day, the Chinese news portal Mil.news.sina.com.cn opened the veil of secrecy over some of the details of the works. The authors of the publication in plain text stated that China could use not only its own developments, but also foreign experience. As a foreign project of an atomic aircraft carrier that could help Chinese designers and scientists, the Soviet project 1143.7 was named in the publication. Under this project, in the late eighties and early nineties, the aircraft carrier Ulyanovsk was built. Journalists directly stated that, despite the sad end of the Soviet project, the developments on it are interesting for China and could be used in the development and construction of new ships of similar purpose.

The official plans of the Chinese Ministry of Defense regarding the construction of new aircraft carriers have not yet been announced. To date, all available information on this topic has been reduced to several statements by various high-level officials, all of which are extremely general. No exact numbers or detailed technical information has been provided so far. For this reason, there are several assumptions about the further development of the Chinese aircraft carrier. fleet. One of the most popular versions (it is worth noting, it is also mentioned in the publication Mil.news.sina.com.cn) is the one according to which in the coming years China will build a number of non-nuclear aircraft carriers and only after that it will start creating ships with a nuclear power plant.

According to various estimates, a series of non-nuclear aircraft carriers will consist of no more than four or five ships. Such a quantity will provide aircraft carriers with all three fleets of the Chinese Navy and thereby increase their combat effectiveness. Chinese shipbuilders are guaranteed to spend several years on the implementation of the non-nuclear part of the aircraft carrier program. It is possible that the last of four or five ships with a steam turbine power plant will be laid down not earlier than 2018 or even later. Around the same time, the start of construction should be attributed, and if everything goes well, then launching or even commissioning the first Chinese aircraft carrier with a nuclear power plant. The number of such ships also remains in question, but it can be assumed that it will not exceed the total number of non-nuclear ships with aviation group.

Creating an atomic aircraft carrier, primarily because of the most complicated power plant, is a rather difficult task even for an industrially developed country. Given this fact, as well as some characteristic features of the Chinese approach to the design of military equipment, interest in the Soviet project 1143.7 looks more than understandable. Also in this context, you can recall history with the origin of the first Chinese carrier-based fighter Shenyang J-15, which can reveal the situation with the new aircraft carriers of China and Soviet developments in an interesting light. Recall, despite numerous statements by officials that J-15 was developed by China independently on the basis of the earlier J-11 fighter (an unlicensed copy of the Soviet / Russian Su-27SK), most experts and aviation enthusiasts associate its appearance with Chinese purchases from Ukraine, one of the prototypes of the Soviet T-10K. Thus, there is every reason to suspect China of the complete or almost complete absence of any of its own developments on the subject of atomic aircraft carriers, as well as of wanting to use someone else’s experience and pass it off as its own. 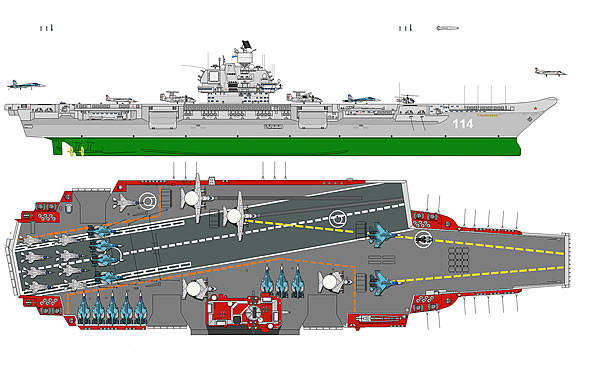 Demonstrating the reasons why the Soviet project 1143.7 is interesting to China, the portal Mil.news.sina.com.cn cited the main characteristics of the lead ship, named Ulyanovsk. A ship longer than 320 meters with a flight deck about 80 m wide should have a displacement of over 62 thousand tons, and also be equipped with an 33-meter take-off springboard and two steam catapults. "Ulyanovsk" could carry up to 70 aircraft of several classes: fighters, helicopters and long-range radar detection aircraft. In addition, anti-ship and anti-aircraft missile weapons were provided. The operability of the huge ship was supposed to be provided with the help of four nuclear reactors KN-3 and four steam generating plants OK-900. The total power of the power plant is 280 thousand horsepower.

The construction of the aircraft carrying cruiser Ulyanovsk began in the autumn of 1988, at the Black Sea Shipbuilding Plant (Nikolaev). To assemble the structures of such a large ship, we had to modernize the equipment of the plant. "Ulyanovsk" was supposed to join the Navy by 1995 year, but the difficult economic situation in the Soviet Union, and then its collapse put an end to all plans. The ship was ready for about 20% (shipbuilders managed to build most of the hull structures), but the leadership of independent Ukraine ordered to stop work and cut the unfinished ship into metal.

It should be noted that the construction of "Ulyanovsk" stopped not for technical reasons, but because of economic and political problems. Thus, this project, despite its sad ending, can be considered successful, at least technically. Probably, this fact attracts the attention of Chinese shipbuilders. The technical solutions applied in the 1143.7 project are of great interest for any country that wants to start creating its own atomic carrier fleet. China is trying to cooperate with Russia in the military-technical industry and therefore we cannot exclude the possibility that he formally offers to begin a joint project to develop an atomic aircraft carrier as a whole or just a nuclear power plant for it.

Should Russia agree to such cooperation? Most likely no. The construction of nuclear aircraft carriers can be attributed to the category of projects of the defense industry, which should be created only independently. Carriers with nuclear power plants, due to their capabilities and characteristics, are a great force and therefore the technology associated with them should not be transferred to third countries. In addition to the military-technical aspect, it is also necessary to pay attention to the military-political one. Over the next few years, the Russian Navy will not receive ships of this class, and therefore cooperation in this area with a large neighbor with big plans cannot be considered a sensible step. At the same time, Russia may agree to sell some technologies that are not directly related to nuclear reactors for ships, but at the same time, are necessary for the realization of Chinese plans. However, cooperation or refusal of it requires an official request from China. So far, Beijing has not sent Moscow any such documents and it is not known whether it will send it at all. 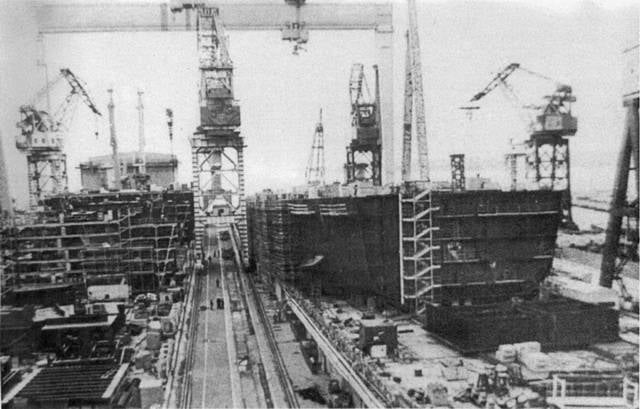 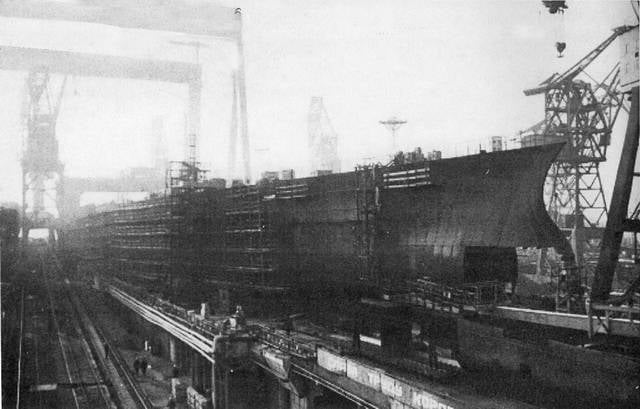 Heavy aircraft-carrying cruiser "Ulyanovsk" in construction, 6 December 1990 of the year 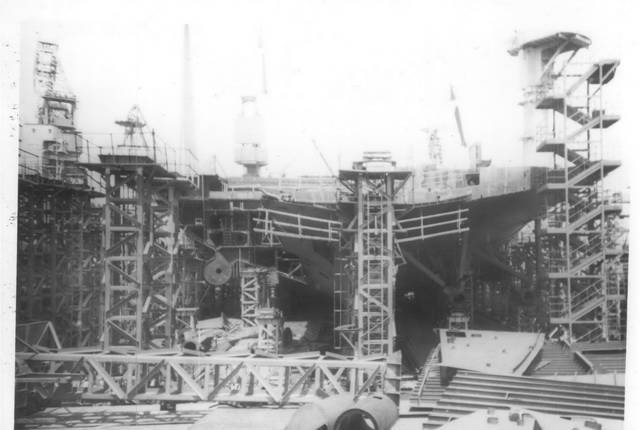 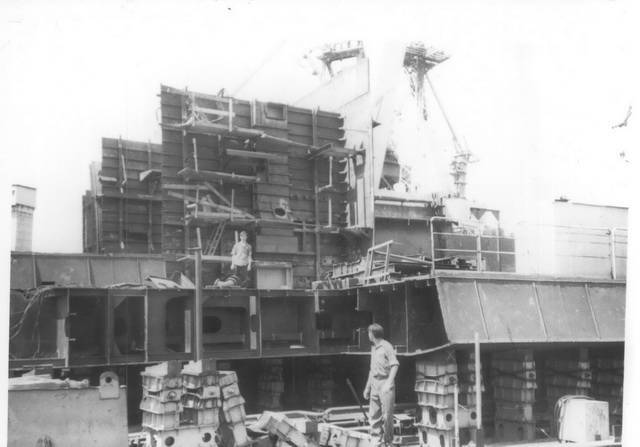 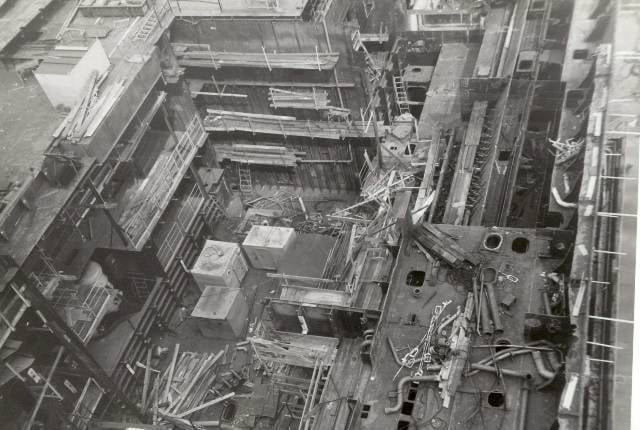 TAKR "Ulyanovsk" at the Black Sea Shipyard in Nikolaev, the beginning of the 1990-ies