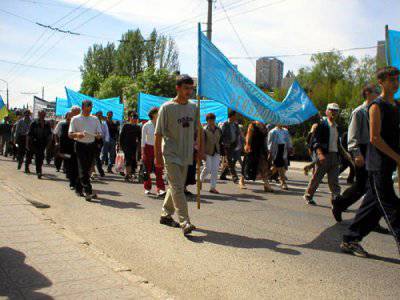 According to its characteristics Circassian question recalls the question of the Crimean Tatar. The only difference is that the Crimean Tatar question was raised much earlier, and its authors partially achieved their goals, but they are not going to stop at what they have achieved.


With the collapse of the Soviet Union, a strong group of national leaders headed by the Soviet dissident Mustafa Dzhemilev formed in the Crimean Tatar environment. By this time, the national question had ceased to be an internal affair of the USSR itself, and third forces had the opportunity to influence the internal political situation in our country by influencing various ethnic groups of the Soviet population. One of these groups was the Crimean Tatars.

Among the similarities of the Crimean-Tatar and Circassian question we highlight the following:

1. Crimean Khanate and Circassians lived raiding economy, sometimes enmity with each other (Battle of Kanzhala 1708 g.).

2. With the accession to Crimea of ​​the Russian Empire in 1783, the centuries-old opposition of the Russian state with the Crimean Khanate ended. With the accession of the Caucasus to the Russian Empire, the long confrontation between the highlanders and Russia also subsided. The Crimean Tatar aristocracy was equalized in rights with the Russian aristocracy, and the Crimean Tatar people were integrated into the social and political structures of the empire. Caucasians found themselves in the same position almost a century later - in 1864.

3. The defeat of the Crimean Khanate in the war with Russia significantly weakened Turkey’s geopolitical influence in the region. With the end of the Caucasian War, another, equally sensitive blow was dealt to the Turkish influence. The Crimea and the Caucasus are adjacent to the Black Sea from the flanks, and the country that owns them turns into a weighty sea force. Previously, it was Ottoman Turkey, then - the Russian Empire.

5. The Crimean Tatars, like the Circassians, were used by the Ottomans as a military force. Therefore, their descendants live today along the perimeter of the former possessions of the Ottoman Empire (Bulgaria, Romania, Jordan, Syria, Iraq, Egypt, Israel, Lebanon, Sudan).

6. Crimean Tatar activists and their pro-Western Circassian colleagues deliberately idealize the situation of their diaspora in Turkey, where they do not even publish data on the ethnic composition of the country’s population, so as not to provoke separatist sentiments among certain groups of the population, which is why the exact number of Circassians and Crimean Tatars in this country is difficult to calculate. Despite such bans, the Crimean Tatar and Circassian nationalists adhere to the principle of “about Turkey either well or in no way” in the controversy with opponents.

7. The most important similarity is an appeal to third countries with a request to put pressure on Russia, forcing it to unconditionally satisfy the demands made by the Crimean Tatars and Circassians.

There are many differences between the Crimean Tatar and Circassian question. These differences are structural, not functional. Those. The geopolitical functions assigned to the Crimean Tatar nationalists and their Circassian counterparts are the same - to help remove Russia from the Black Sea region, to withdraw Crimea and the North Caucasus from the Russian jurisdiction, ensuring the arrival of other players there (Turkey, EU, US).

The Crimea was finally removed from under Russian jurisdiction with the collapse of the Soviet Union, with the exception of the city of Sevastopol. Finding himself as part of an independent Ukraine, Crimea has become a place of ideological confrontation between the Crimean Tatars and the central authorities. The political weakness of Kiev contributed to the establishment of ethnic authorities of the Crimean Tatars on the peninsula - Kurultay (national congress) as part of 250 delegates and the Majlis (the executive body of Kurultay). The Mejlis is not registered as a public organization by the Ministry of Justice of Ukraine, but this does not prevent it from developing violent propaganda-political activities. In the structure of the Mejlis, the Department for External Relations has been established, whose employees establish connections with the outside world through the head of Kiev. It was through the External Relations Department that the Crimean Tatar leaders met with the American “hawks”, including with “sworn friend” of Russia Zbignev Brzezinski, parliamentarians of the Czech Republic, Germany, Austria, Hungary, Poland, Turkey, Cyprus.

During such meetings, foreign representatives assure that Kiev’s relations with the West will directly depend on the solution of the Crimean Tatar issue, as well as a wide range of international topics that at first glance have nothing to do with the Crimean Tatar issue. So, at the meeting of “Medzhlis” with the Moldovan ambassador to Ukraine Ion Stevile, the theme of Moldovan-Gagauz relations was touched upon (Gagauz is an Orthodox, but related to the Crimean Tatars people, but focused more on Russia). Thus, the Majlis duplicates the functions of the central government, pursuing a foreign policy that is inconsistent with Kiev, and choosing for itself allies and enemies on its own. Further, more: the Crimean Tatars are the only people in Ukraine who demand their own quotas when distributing posts in regional authorities (SBU, Ministry of Internal Affairs, prosecutor’s office, tax service, district administration, regional administration).

There is every reason to assume that the West is trying to lead the Circassian issue along the same path as the Crimean Tatar, which, as can be observed, turned out to be quite “successful” for them (the Crimean Tatars are outside the control of the central authorities, enter into alliances with the Ukrainian nationalist parties Russophobic sense, make contacts with foreign partners bypassing Kiev). By the way, the Ukrainian nationalists project the "Great Circassia" quite welcome.

The Circassian issue has so far stalled just at this stage: the demands to allow foreign Circassians to return to the Caucasus, provide them with work and residence, and repent of the genocide.

In the case of the Crimean Tatars, moral and historical requirements further mutated into political and economic demands: demands for the return of property, recognition of the right of the Crimean Tatars for their own statehood and independent foreign policy activities. When these demands were voiced, Kiev was already tied hand and foot not only by the threats of the West to curtail cooperation if the wishes of the Crimean Tatars were not taken into account, but also by the inability to reduce the heat of the claims put forward by the Majlis supporters. The reconstruction of the Crimean Khanate did not reach, but the Department for External Relations in the structure of the Majlis was created. And this can be considered as the first step towards the construction of a separate Crimean-Tatar state.

If the masterminds of the Circassian issue succeed in pushing it further, we should expect political demands: recognition of the Circassian’s right to have its own ethnic authority parallel to the official authorities, both regional and central (by analogy with the Crimean Tatar Kurultay and Majlis), and unaccountable to them; the right of this authority to enter the international arena itself and discuss a wide range of issues not with Moscow, but with its opponents.

If this happens, a change in the ideological discourse of the Circassian movement itself will follow, and the next step will be to uphold the legitimacy of the formation of the Circassian state from both legal and historical points of view. At first, this statehood can be formed within the framework of the federal structure of the Russian Federation. It’s not the legal formalization of the federal unit that will change, but its ethnopolitical composition: the new administrative entity will cover all the Adygs living in the Caucasus with the intention of giving their national identity a different, non-Russian format.

Just as in the Crimean Tatar schools and gymnasiums, students live in a completely different ideological atmosphere than their Slavic peers, schools and universities of the “Great Cherkessian” administrative-territorial unit will have their own educational policy, without unifying it with all-Russian standards. In Crimea, such schools are funded by Turkey and the Arab countries. The same sponsors will respond to the call of the "Great-Cercian" adherents.

The predictable next step will be the rejection of a federation with Russia and the formation of its own state, which, obviously, is seen not as a subject, but as an object of geopolitics. It will not be able to pursue a full-fledged foreign policy and being a de facto protectorate of external forces. There will be a cardinal reformatting of the geopolitical arrangement of the Caucasus region, and this, as history shows, is always a prelude to a series of bloody conflicts.