18 2013 June
176
Despite the strict and public prohibition of the President of Russia on any form of employment of the ex-minister of defense to state structures, Anatoly Serdyukov has been officially “working” for more than a month as an adviser to the head of Rosnano, Anatoly Chubais, a blog postMotherland Vera. true». 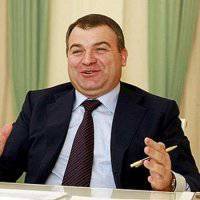 “According to reliable sources in the Russian state corporation Rosnanotechnology (Rosnano), A. Chubais’s adviser was the former Russian defense minister and chief witness in the most large-scale corruption criminal case in modern Russia with the personal participation of Prime Minister D. Medvedev, who bypass the ban V announced in the media Putin spent several months quietly searching for the option of employing his friend A. Serdyukov so that he is not dusty and the salary is decent, it’s necessary for the “injured” witness to live for something until you finish tsya investigation of all thefts and abuses in the Ministry of Defense. And this was not easy for Dmitry Medvedev, given the reputation of the ex-minister, which is why the head of the Russian government was denied all the heads of state-owned enterprises, corporations, banks, etc., who did not want to go for the “friend Dima” across the will of the President . But Chubais helped out one friend and arranged for himself an adviser to the "witness" A. Serdyukov, promising D. Medvedev that none of the uninitiated would know about this, and even more so the President of Russia, ”the message states.

As recalled in the publication, in November 2012 of the year, two weeks after Serdyukov’s resignation from the post of Minister of Defense, journalists reported that the disgraced official was already employed as an adviser to the head of the state corporation Russian Technologies S. Chemezov, which had “blown up” the country's information space. As a result, it came to the point that Vladimir Putin had to answer journalists' questions at one of the official events regarding Serdyukov’s strange personnel displacement, in whose office searches are being conducted, and his former subordinates were taken into custody. And the President replied that there was not and will not be any employment of Serdyukov in the state structures, taking into account the situation around the Ministry of Defense.

“Didn’t someone understand something, or did Dmitry Anatolyevich have a friendship with A. Serdyukov“ more ”than normal relations with the President? But the fact is, as they say, the former defense minister, who was barely transferred to the status of a “witness” in corruption cases and embezzlement in his Ministry of Defense, is quietly working in no less “dark” than the military department with him himself Rosnano corporation which, according to the Accounts Chamber of the Russian Federation, caused billions of dollars in damage to the state, where it now receives a good salary comparable to the level of A. Chubais’s deputies - 500-600 thousand rubles per month (not bad for a loss-making company developing budget funds!). But the comicity of the situation lies in the fact that A. Serdyukov periodically "goes to work" in Rosnano, which causes a lot of trouble for the local security service, which A. Chubais set the task to take comprehensive measures to prevent the spread of information about the very fact of employment of the former defense minister in corporation. So, at a recent meeting with Chubais, which was filmed by television crews, A. Serdyukov, who was sitting in the presidium, covered his face with his hands and hid under the table, when a television camera was aimed at him, which caused the "uninitiated" corporation partners who attended the event (which you will make not to substitute friend Dima before the head of state!?) ", - it is noted in a material.

“In general, the show continues, and we witnessed the invention and introduction of a new form of“ state witness protection program ”in Russia, this is when a valuable witness in a criminal case is not given state protection, does not change appearance, documents and place of residence, but simply employ at another state feeder, severely punishing the owner of this trough to "keep his mouth shut." An excellent topic for a possible dissertation of lawyer D. Medvedev - how to protect the “valuable witness” and his friends at the expense of a state corporation from the wrath of the President of Russia! There will be something to do to Dmitry Anatolyevich after returning from the White House to his native law school! ”- the author of the article ironically concludes.

Ctrl Enter
Noticed oshЫbku Highlight text and press. Ctrl + Enter
We are
The railway bypassing Ukraine will be in 2017!New sharp turns in the Oboronservis case: an agenda for Anatoly Serdyukov
176 comments
Information
Dear reader, to leave comments on the publication, you must to register.