Stalin on the personality cult of Stalin 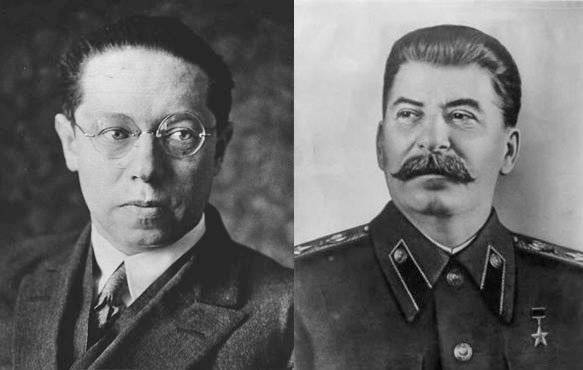 A fragment of an interview given by JV Stalin to the German writer Lyon Feuchtwanger, who visited the USSR in 1937.

Feuchtwanger. I have been here for 4 – 5 weeks. One of the first impressions: some forms of expression of respect and love for you seem to me exaggerated and tasteless. You give the impression of a simple and modest person. Are these forms an unnecessary burden for you?

Stalin. I totally agree with you. It is unpleasant when exaggerated to hyperbolic sizes. People come to ecstasy because of the little things. Of the hundreds of greetings, I respond only to 1 – 2, I don’t allow most of them to print, I don’t allow me to print too enthusiastic greetings as soon as I learn about them. In nine-tenths of these greetings - really full bad taste. And they give me unpleasant experiences.

I would not like to justify - it is impossible to justify, but humanly to explain from whence such unrestrained, reaching for ecstasy delight around my person. Apparently, in our country we managed to solve a big problem, for which generations of people have fought for centuries, babuvisty, Hebertists, all sorts of sects of the French, English, German revolutionaries. Apparently, the resolution of this task (it was cherished by the workers and peasant masses): exemption from exploitation causes tremendous delight. Too people are glad that they managed to get rid of exploitation. Literally do not know what to do with their joy.

A very big deal is the release from exploitation, and the masses celebrate it in their own way. All this is attributed to me - this, of course, is wrong, what can one person do? In me they see a collective concept and make a fire around me with a delight of calves.

Feuchtwanger. As a person sympathetic to the USSR, I see and feel that feelings of love and respect for you are completely sincere and elementary. Just because you are so loved and respected, can you not stop with your word these forms of display of delight that confuse some of your friends abroad?

Stalin. I tried several times to do it. But nothing works. If you tell them it's not good, it won't do. People think that I am speaking out of false modesty.

We wanted to raise the celebration about my 55 anniversary. I conducted through the Central Committee of the CPSU (b) the prohibition of this. Complaints began to come in that I prevented them from celebrating, to express their feelings, that it was not about me. Others said that I was breaking down. How to prohibit these manifestations of enthusiasm? Force is impossible. There is freedom of expression. You can ask in a friendly way.

This is a manifestation of a known lack of culture. Over time, this will bother. It’s hard to stop expressing your joy. It is a pity to take strict measures against the workers and peasants.

Our people are still lagging behind in terms of overall culture, so the expression of delight turns out like this. By law, prohibition cannot do anything here. You can get into a funny position. And the fact that some people abroad are upset is nothing to be done. Culture is not immediately achieved. We are doing a lot in this area: for example, in 1935 and 1936 years alone, over 2,000 new schools were built in cities. By all measures we try to raise the culture, But the results will affect through 5 – 6 years. The cultural rise is slow. Delight grow rapidly and ugly.

Feuchtwanger. I am not talking about the feeling of love and respect from the workers and peasants, but about other cases. Exposed in different places your busts are ugly, poorly made. At the planning exhibition in Moscow, where you still think about you all the same, why is there a bad bust? At the exhibition of Rembrandt, deployed with great taste, what is there a bad bust?

Stalin. The question is logical. I meant the masses, not bureaucrats from various institutions. As for the bureaucrats, it is impossible to say about them that they have no taste. They are afraid, if there is no Stalin’s bust, then they will either be a newspaper, or the boss will curse, or the visitor will be surprised. This is an area of ​​careerism, a peculiar form of "self-defense" of bureaucrats: in order not to be touched, Stalin’s bust must be set.

To any party that wins, alien elements are attached, careerists. They try to protect themselves according to the principle of mimicry - busts are put up, slogans are written, in which they themselves do not believe. As for the poor quality of the busts, this is done not only intentionally (I know, it happens), but also because of the inability to choose. I saw, for example, in the May Day demonstration portraits of mine and my comrades: similar to all devils. People are carried with delight and do not understand that portraits are not suitable. You can not issue an order to put up a good busts - well, they to hell! There is no time to be engaged in such things, we have other business and cares, and you don’t look at these busts.

Ctrl Enter
Noticed oshЫbku Highlight text and press. Ctrl + Enter
We are
About Stalin and KhrushchevRecord of the conversation of comrade Stalin with the German writer Lion Feuchtwanger
Military Reviewin Yandex News
Military Reviewin Google News
38 comments
Information
Dear reader, to leave comments on the publication, you must to register.