18 2013 June
151
Games of commitment to the ideals of Western democracy are often mixed in blood. In this case, those for the sake of odobryamsha whose blood is shed, just rub their hands from the fact of the reliability of the short leash on which the new satellites are held. Georgia has turned into one of such satellites of the “progressive” West, whose authorities are ready to sprinkle the altar with the blood of their people with the sole purpose that the West will not deprive the Caucasian state of its attention. 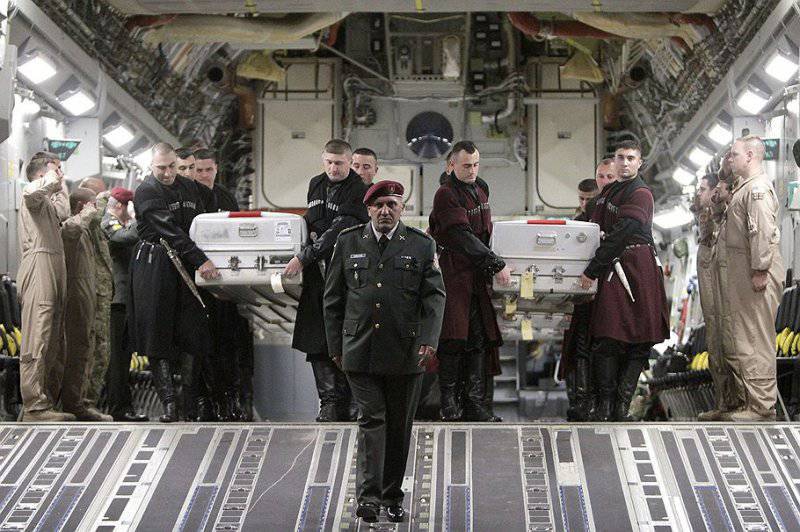 Proof of the readiness of the Georgian leadership at any cost to bring the country to NATO is more than a thousand and a half contingent of Georgian troops in the ISAF in Afghanistan. More than 1500, Georgian soldiers and officers are in one of the most volatile provinces of Afghanistan - Helmand Province, the same province that today is the real world leader in the cultivation of opium poppy. During their four-year tenure in Helmand, the Georgian units lost 29 people killed and more than 130 injured. Seven were killed in a terrorist attack that took place in Afghanistan on June 6. Then a suicide bomber detonated an explosive device in the immediate vicinity of the place of deployment of Georgian soldiers. The consequences of the terrorist attack are also 9 injured, who were taken to the central hospital, where doctors continue to fight for the lives of the soldiers.

Why did the Georgian military contingent choose the target for the Taliban attack? The fact is that on May 26 (on the day of Georgian independence), Georgian President Mikheil Saakashvili (and he still occupies his presidency) decided to personally greet the Georgian troops stationed in Afghanistan. As you know, on this day Saakashvili usually hosted a military parade in Tbilisi, but the representatives of the current ruling party canceled the parade. Saakashvili, in order to emphasize his determination even in the absence of a parade to demonstrate the achievements of his brave warriors, went to Afghanistan with his eldest son Edward. The underlining of determination was passed in the spirit of the Georgian president, who in front of the reporters' cameras began to interrogate Georgian soldiers, how they destroyed the Taliban, and how easily they did it. Like, look, friends from NATO - and you still do not want to take us under your warm wing ...

This show was then shown on several TV channels. As it turned out, we watched a TV program telling about the fighting spirit of the Georgian soldiers in Afghanistan, not only the citizens of Georgia, but also the Taliban. The latter decided to test the boldness of the Georgian contingent and the Georgian contingent itself for strength, sending it to the location of the suicide bomber. Udal disappeared quickly: seven “two hundredths” (privates Grigory Guchashvili, Boris Tsugoshvili, Zviad Sulkhanishvili, Mikheil Narindoshvili, Zurab Gurgenashvili, Corporals Georgi Adamov and Teimuraz Ortavidze) and nine more “three hundred” weights, weights, weights and 17 Afghanistan

After this, a new wave of criticism has risen in Georgia both against Saakashvili and other government officials who support the presence of the Georgian military contingent in Afghanistan. Your deeds are wonderful, O Lord — one of those who called for the immediate withdrawal of Georgian soldiers to home was ex-President Edward Shevardnadze. After all, it was at the suggestion of Mr. Shevardnadze that the Georgian military personnel began to participate in joint operations with NATO troops. It all started with Iraq and Kosovo, Afghanistan continued. And the operation in Afghanistan is a kind of apogee for Georgia. Not only that it was here that the Georgian contingent suffered the greatest losses, so in addition - it is the Georgian contingent that is the most numerous of all the contingents of those countries that are not members of NATO in Afghanistan. And if many countries, even members of the North Atlantic Alliance, had withdrawn their troops from Afghanistan completely a year or two ago, then Nenatov Georgia continued to demonstrate how much she wants to cling to the ideals of NATO.

Against the background of the mourning that took place in Georgia in memory of the victims, conversations began to be heard about holding a referendum in which the Georgian people should finally express their opinion on the expediency or inexpediency of finding the Georgian military on the territory of Afghanistan.

It is noteworthy that a day before the tragedy involving the Georgian military, a video was published on the Internet under the title: “Taliban jihad against Georgian soldiers in Afghanistan”. In the video, which, as indicated, was created by a certain “Voice of Jihad”, indicates which forces at various times sought to gain control over Afghanistan, and what came out of it. Next, the authors turn to a comparison of Georgian soldiers with the Crusaders, who are trying to achieve their goals in Afghanistan. With detailed comments describes what was waiting and waiting for the Georgian military, trapped in Afghanistan on the orders of Mikhail Saakashvili.

We know your names, your addresses well. We know your relatives. We will come to Georgia. We are ready to revenge.
The appearance of this video on the Web in Georgia was noticed already when the terrorist attack on Helmand took place. Immediately they began to argue on the topic of who could post video materials of such specific content on the Internet. President Saakashvili and a number of his supporters, according to the established tradition, immediately “found” those responsible for the publication. And, in their opinion, not even the Afghan Taliban are guilty at all. They say, can the Taliban remove and mount something similar? .. According to the president, the video was posted on the Network by the people of Ivanishvili, and, according to the ex-Minister of Defense of Georgia Mr. Shashkin, the movie “Voices of Jihad” is in general the work of Russia. Well, who else ...
So, maybe, the people of Ivanishvili, together with the Russian associates, even fought off in Helmand, in order immediately after the publication of the video to arrange an undermining of a suicide bomber near the Georgian military base? ..

To confirm his suspicions, Saakashvili even appealed to the FBI to help Georgia identify the author of the scandalous video in which the Taliban threatened to come to Georgia and avenge the crimes of the Georgian military in Afghanistan. The FBI will certainly confirm ... They will not rust for them. And it turns out, for example, that Putin himself recorded voice-overs and attached pictures to discredit the current Georgian president and intimidate the Georgian people ...
In the meantime, the US FBI “helped” Saakashvili to look for the authors of the video, another remarkable event occurred in Georgia that could be related to the information presented above. 13 June, the Georgian special services reported that they had prevented an act of terrorism. Employees of the Georgian Ministry of Internal Affairs detained some of Rizvan Omarov and Mikaela Kadyeva, at the place of residence of which an entire terrorist arsenal was discovered. Omarov and Kadyev, as reported by several Georgian media, have been in Georgia since 2011, but at the same time were citizens of the Russian Federation, hiding this with their fake passports. Then it turned out that Kadyev had been on the international wanted list for two years, which did not prevent him from showing considerable activity on Georgian territory and remaining out of sight of the special services.

Georgian political analyst Zaal Kasrelishvili expressed his point of view about the detention of alleged terrorists in Georgia. He believes that the two detainees were on the territory of Georgia with the permission of Saakashvili himself, who was trying to actively use the microgroups of the North Caucasus to create the so-called controlled chaos in the region, which (chaos) was supposed to strike across Russia. At the same time, as Kasreishvili is sure, Saakashvili here was only performing someone's (not difficult to guess someone's) will. It was this powerful cover that made it possible to create in the territory of Georgia numerous camps for terrorist groups that were marked by forays into Russia. After the Georgian Dream party, led by Bidzina Ivanishvili, won the parliamentary elections in Georgia, the emphasis had to be shifted. A new goal - the position of Ivanishvili, which could be significantly undermined (and in the literal sense of the word, too) by terrorist acts in Georgia. The first attempt to success, apparently, was not crowned.

If you believe the words of Kasrelishvili that Saakashvili himself was engaged in the patronage of terrorists, then what prevented Saakashvili himself and concoct the same movie that caused a lot of noise in Georgia. After all, any terrorist act in this case could have been attributed either to the Taliban, or to Ivanishvili, or to Russia, and to remain clean and re-claim the growth of the political rating. The version is conspiratorial, but Saakashvili’s personality is no less conspiratorial, which is proved by the events of August 2008.

The terrorist attack on the Georgian military in Afghanistan, a video about the impending retaliation, the prevention of a terrorist act in Georgia is not all that concerns the military-political situation around this Caucasian state. Literally thunder sounded the recent words of the Georgian Defense Minister Irakli Alasania, who said that Georgia had notified NATO partners about the closure of its two bases in Afghanistan. It would seem, well, that's all: the voice of the Georgian people has been heard, now the soldiers will return home, and sorrow will no longer come into the hearts of wives and mothers. But Alasania corrected his words over time. He said that in fact he had in mind not the withdrawal of the Georgian military contingent from Afghanistan, but the closure of the bases as such - with the redeployment of soldiers to other places all in the same Afghanistan.

In other words, Georgia’s withdrawing its soldiers from Afghanistan does not allow Big Brother, well, or the will of Georgia itself, without fail and in everything, Big Brother to like. As an option: a game with the Taliban in cat and mouse - they closed one base and fled to another, then they closed the other, then they would run to the third. And so, apparently, until the last Georgian soldier ... Well, or until the cup of patience of the Georgian people is full.