It all started a week later, after the release of the log from the pier, when crossing the Imperial Mountains, the Paravan was discontinued (towed antenna device (communication))after which the Opera of the Pacific Fleet drives us to 9 degrees north latitude with the subsequent forcing of the Hawaiian ridge in 30 miles from o.Oahu ??? !!! And on this area of ​​the map 50-60-s with red circles and the inscriptions "Active volcanic activity ...", in short, do not believe what you see ... at the same time, the depth difference from 4500 meters to ... zero !! ! Yes, I clarify for the uninitiated, the use of the echo sounder in order to comply with the regime of HIDNESS is allowed in EXTREME cases, read PROHIBITED !!!

After leaving the underwater narrowness, we decided to adjust the longitude with the help of ROS "Saiga" (radio text) ... yes, I forgot to inform you that before 1985 on the rpkSN ave.667-AU on 2 there was no ADC (space navigation system)... nor any 1 2 or 3, and only the heroic efforts of your humble servant, the day before the departure brought on their own backs with recessed GTRI "Anadyr" FIRST on DPL ADK 8-3, there was a hope to comply with rocket READY accuracy and VAT SKHRANENIYU (shooting start data), but ... on the K-258 a radio antenna was installed not ANIS and VAN, which was not coordinated with the ADC !!!

Further easier ... raised by a tip from the system. (basic patrol aviation US West Coast) takes us for F ...?!

And we will learn IT at the most inappropriate moment when we have “Yalda” fought (head of hoisting mast device) ROS "Saiga" on KU = 40 deg.dr.b., ... Urgent immersion ... Mechanics do not have time to bring YALDU to its original position ... we dive ... YALDA ... ITALY ... as the shaft cover was closed ... even the mechanics did not understand !!!

Well, okay ... it was not there, on the second day we were detached from the adversary, diving under one transport and then changing it to another counter, slapping in the opposite direction.

It was a sigh that WE had a full breast of cut-off air ... and decided to float Air HP to stuff through PVP (air intake under water), and at the same time look around ... at the periscope ... how is the assistant from my combat to the navigator on the intercom, my former navigator, Alexander Sholokhov, captain of 3 rank, asks for a backfill question ... "navigator, how far is it from the coast?" ... I did not hesitate: ... "400 miles to Hawaii, well, 600 miles to US ZP ..." question number 2: "... and what in the middle of the ocean does the VESSEL TOWED TOWARDS and POSSIBLE MANEUREMENT?"

... So began the 28 daily struggle, read the "war", rpkSN to-258 with two CPUGs (8 NK) equipped with AN \ BQQ-14 (-17) GAS in providing shipboard helicopters, BPA and support ships. It was the FIRST use of the US Navy of the TAKTASS system on the Pacific Fleet during the "operation to oust the Soviet Navy of the Soviet Navy from areas of their combat patrols." And on the cover of the JUS, the commander wrote with a red pen: "WAS SMOOT ON THE PAPER, YES BAD ON ARMS."

I do not describe further details, a lot of things have been ... still probably under the neck ... "SECRET."

- Conclusion 2-x GEM on 100% power and giving the maximum possible course 24,4 node, at a depth of 150 meters !!! They couldn’t dive anymore, they broke through the main drainage line, from 4'S GONS (main drainage pump) 2 is not built in, 1 has low insulation resistance !!! Explanation: K-258 did not pass the average repair and was already in the battlefield for more than 9 years, and for extending the resource the Active Reactor Zone on the SRH-49 was overloaded and ANY repair was made ... counted as MEDIUM !!!

- Daily repeated CLUTCH of any rudders and hydraulic systems, for the above reason, ... REPLACE HYDRAULICS ... but "cartridges of the wrong caliber" turned out !!! Hydraulics curled ... in the tubes ...

- When giving large passages, the Emergency-Towing Device was vomited and exhausted, with which the Chopping GRs were jammed (horizontal wheels) and by a miracle did not wind on the screws ... And also the BAD COMMONISTS HAPPEN, the VAN flowed and the IVA was broken off ...

- The temperature of the water overboard + 20-27 degrees, about Refrigeration Machines and the temperature in the compartments say nothing ... but the glass ANS "Wave" (astronavigation sextant) overgrown with algae so that even the SUN was observed as a blurred pancake on a frying pan ... Explanation: On Ave. 667-AU, the Head of the Wave is constantly WET, since unlike B, BD, BDR, etc. mine ANS "Wave" is not provided for in the project.

- As a result of the above, it was necessary to emerge on a dark, rainy night UNCLEARED CUT, send the Communications Operator to the deckhouse to install a retractable antenna in order to give an RDO (radio messaging) and the navigator electrician clean the glass of the ANS, since these were the LAST remaining means of both communication and location determination !!! Moreover, someone chopped with an ax a piece of an ABU cable on the steering wheel of the GR ...

- After giving RDO about tracking ... the signal was NOT RECEIVED communication centers in Kamchatka, Vladivostok, Khabarovsk, Moscow ... ACCEPTED CSS (communication center) in Cuba, which relayed it directly to the US General Staff Navy, and he lay down on the table of the Commander-in-Chief of the Navy, who without hesitation picked up Khvatov's Kom.TOF and asked the question ... "and what is this about YOU going on in the Pacific Ocean? few???" about Kopeikin below

- Com.TOF sent from Kamchatka a pair of TU-16 reconnaissance aircraft that flew to Adah Island, there was already no refueling then, and the entire fleet had only two pairs of TU-16 and a pair of TU-95 !!! and they said, "YES SOMETHING IS BREAKING ..."

- In short, THEY us KINULI at Adah, when we rode an average trot from Hawaii, along the US PZ, through the Gulf of Alaska and along the Aleutian ridge, reeling on 16500 miles, at the normal rate of 11000 miles ...

But this was not the worst ... 24.05.1985 of the year on the pier US had already been waited by the commission of the Pacific Fleet headquarters headed by Khvatov ... and the BLACK WEEK started ... after which the commander 1 captain rank Zhora Dunaev wiping sweat from his forehead spoke the CLASSICAL phrase: "B ... EASIER TO FIGHT AMERICANS, THAN WITH OUR D ..." 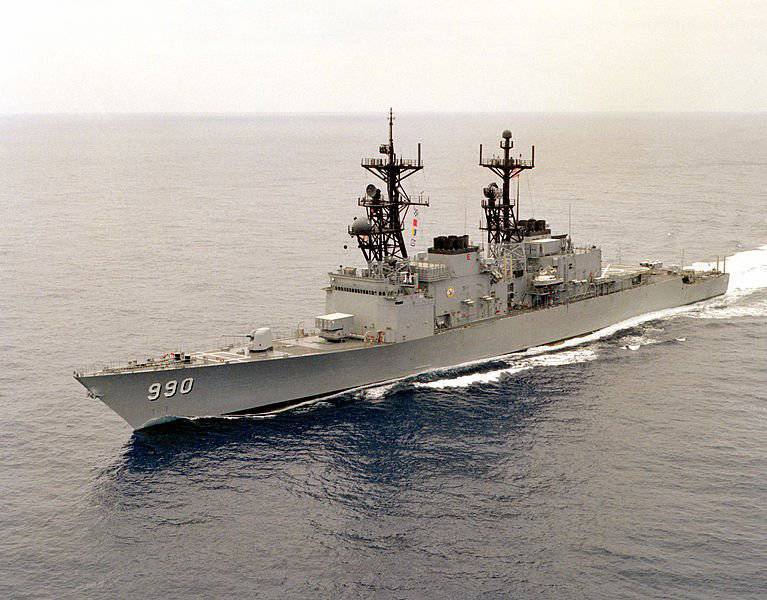 - and even made a maneuver imitating the "TARAN" EM URO of T. Spryuens in order to interrupt the GPBA (Flexible Towed Antenna) AN / BQQ-17.

Fourthly, the use of EW in combat conditions, especially in such quantities, at the same time for 4 days (and not for 3 months) while being used with special maneuvering, prescribed in the guidance documents on detachment from tracking PLS and Funds, showed not only their INEFFICIENCY and the fact that they are morally yes and physically obsolete, and also the fact that they are obsolete and have proved to be ineffective methods and methods of their use, since the EW tools and documents for their use were developed in 50-60-x, and "in the yard" already was 1985 year !!! Yes, in 70-x and until 1985, EW funds were not used in such quantities, WE WERE THE FIRST !!! And then something I did not hear about it.

Sixth, the use of rpksn bs on avex 667-A (-AU) in 1983-1986 years, in conditions very close to the fighting, except that it did not use rocket and torpedo weaponi.e. in areas of ACTIVE and INTENSIVE use of PLCiS (NK, PLA, BPA, VESS) showed that THEY are DISPOSABLE units, which, if detected, will be destroyed with P = 0.9, i.e. simply KAMIKAZE .... and the question of detecting them with P = 0.8 did not make up for the US Navy PLS, with their massive use, at that time of particular difficulty, since the noise of the second generation rpkSN left much to be desired !!!

Therefore, from 1987 of the year, well, also for political reasons ..., for rpkSN ave.667-AU, BS areas were changed and the targets were redistributed to the territories of other states of potential enemies and rpkSN began to RIDE BY RAILS in the Bering Sea, Sea of ​​Okhotsk and the Sea of ​​Japan, so say, in their coastal seas in the zone of action of their forces and means providing them ...

In the Aleut, it was discovered by a US Navy submarine of the Los Angeles type, which used EW active sonar facilities that mimic the use of torpedoes at rpkSN. As a result, the commander of K-500, believing that it was actually used torpedoes, was forced to emerge in an emergency in a surface position and, as a consequence, the loss of secrecy rpkSN, they immediately found the BPA, which induced the PLA as a result of the failure of the BS.

I don’t know the particular details, only from the mouth of the crew members I met in 1991 in the Big Stone when I received K-530 from repair.

According to others, the Americans used TWO Los Angeles-class submarines.