Gulag and our victory 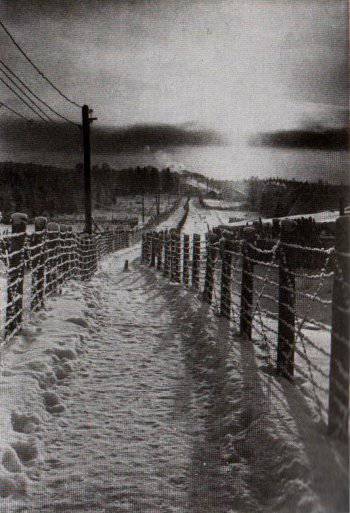 Arguing on the site about the reasons for the victory of our people in World War II, most of the authors usually never mention the GULAG. Meanwhile, the latter is directly related to this topic, since it was one of the most important components of this Victory. True, this view can not be called popular among historians. Judging by the publications on the Internet, another prevails among them today, the extreme expression of which is the views of P. Krasnov, who asserts that the gulag prisoners could not make a serious contribution to the economy of the USSR, since they were less than 2% of his labor resources (P. Krasnov. What there was a risk of being in the Gulag // www.rusproject.org/pages/analysis_3/risks_stalin.html).


This statement is at least controversial, because it relies on dubious grounds (like most of its other conclusions). Let us dwell on them in more detail. This figure is obtained from this author as a result of dividing the total number of labor resources of the USSR defined by him (120 million) by the maximum number of prisoners by the beginning of the war. In fact, to determine the economic efficiency of the Gulag, it is necessary to compare the number of prisoners not with the general labor resources of the USSR, but with the number of industrial workers, since the labor of prisoners was used mainly in industry. The negligibly small part of them was engaged in agriculture, and the products they produced were used exclusively for the needs of the Gulag itself.

According to the census 1939 of the year, the working class was then 33, 7% of the population of the USSR, and a third of it was engaged in agriculture (workers of state farms and MTS). Thus, 22,4% remains on industrial workers, that is, approximately 44 million people. The working-age population (16 to 59 years) was then in the USSR 55,5% of its total population (www.mysteriouscountry.ru/wiki/index.php/ USSR national economy / 1960 / Territory and population), which means of the total number of industrial workers that's a little over 24 million. If we take only those industries where bonded labor was mainly used (mining, metallurgy, woodworking, logging, construction, etc.), then the number of workers employed in them was, according to the 1939 census of the year, about 15 million people ( Ibid.) It is these numbers that should be put in the basis of calculations. According to Wikipedia, 1 929 729 prisoners, that is almost 2 million, which is more than 8% of the total number of able-bodied industrial workers and more than 13% of the workers of those industries where forced labor was used, were in camps and colonies of GULAG at the beginning of the war.

However, this figure does not reflect the real ratio of free and bonded labor. The fact is that the GULAG included not only camps and colonies, but also special settlements from the so-called “kulaks” and other “suspicious” to the ruling regime of the population categories of the USSR. Special migrants were also employed, as a rule, in industrial sectors (mainly in coal and forestry). Their number on 1 October 1941, Wikipedia defines 936 people in 547. According to her data, one and a half years before the war, they were evicted from the western regions of Belarus and Ukraine, the Poles, the so-called “osadnik”, in the number of 139 596 people. Together with the prisoners, they all made up about 3 a million people, that is, 12,5% of the total industrial labor force in the USSR and 20% in the employment sectors of prisoners and special settlers.

But even this figure does not give a sufficient idea of ​​the true role of the gulag in the Soviet economy of the military and pre-war years. Speaking about the camp management system, it should be borne in mind that one of the main goals of its existence was the development of rich natural resources, but difficult to reach and very sparsely populated areas of Siberia, the Far East, the Northern Urals and the North of the European part of the country. If we take the labor resources of these territories as the basis, then the prisoners and special settlers here made up almost the most of them. For example, in the Far East, the population of the region in 1940 was about 2 750 000 people (Ibid.), And the prisoners were here by the beginning of the war around 500 000 (Calculated according to the table “Forced labor camps in the territory of the Far Eastern region 1929 - 1954) . ”From the book“ I would like to name everyone by name ”: Book-martyrology. Khabarovsk, 2004), that is, they accounted for about a third of all labor resources of the region and most of the labor resources of local industry and industrial construction. If, however, the special settlers are taken into account, the overwhelming part of the labor force for the industry of the Far East was given by the Gulag. He basically provided it with local raw materials.

True, the labor productivity of prisoners, like any other bonded labor, was not great. Nevertheless, the claim of some historians that the GULAG was completely unprofitable and therefore, from an economic point of view, a meaningless enterprise, in my opinion, does not quite correspond to reality. The lower, compared with civilian workers, prisoner labor productivity was partially offset by a longer last working time: 10-12 hours instead of 7-8 and one day off in 3-4 months instead of weekly. The crisis of the Soviet camp system began after its significant increase in prices as a result of the growth of the bureaucracy and the depletion of the most accessible sources of fuel, raw materials and workers (due to large losses in the Second World War) only in the 2 half of the 40's. In the same years, and during the Great Patriotic War, the GULAG apparently fully justified itself in the eyes of the then leadership of the USSR. Of course, he was not fully self-sufficient even then. But this was not required of him. His main task was the speedy economic development in order to industrialize the poorly populated and poorly developed, but rich in natural resources, the northern and eastern regions of the country. In the harsh climatic conditions of these territories, the use of only civilian labor would inevitably require even greater financial costs. At the beginning of the 30s, the Soviet state did not yet have such means. This fact was the main reason for the deployment of the Stalin leadership of the GULAG system in the USSR. The moral and ethical side of this issue was sacrificed to them for the purely economic interests of the state.
The defeats of the Soviet army in the first period of the war and the loss of the majority of the most economically developed territories of the European part of the USSR seriously affected the work of the Gulag. The evacuation of the western camps caused a significant disorganization of the entire system and a large density of prisoners, and the resulting lack of food in the country led to a significant reduction in their rations. At the same time, production rates for them, on the contrary, have increased. Considering that in the pre-war years, the supply of camps, according to Beria (letter to Molotov from 9 on April 1939), was usually carried out only on 60-65%, this situation could not but lead to a catastrophe. And it really happened. According to Wikipedia, from 1941 to 1943, the year only in forced labor camps (without taking into account the colonies) 735 870 prisoners died. This is 47% of the total death toll in the camps for the 22 of the year, from 1930 to 1952 (1 580 750 people). In total, during the war years, about a million prisoners died. Only by 1944, the prisoners' food standards rose again by 12-46%, but even then they remained 30% lower than the pre-war ones.

Nevertheless, despite the famine, the Gulag made quite a significant contribution to the development of the war economy of the USSR. According to the historian Zemskov, from the beginning of the Second World War to the end of 1944, GULAG prisoners released 70,7 million units of ammunition (including 25,5 million mortar mines, 35,8 million hand grenades and fuses for them, 9,2 anti-personnel mines, 100 thousand bombs and others .), 500 thousand coils for a field telephone cable, 30 thousand boats of drags, 67 million meters of fabric (of which 22 million units of clothing are sewn), 7 million meters of wood, etc.

In general, by type of work, prisoners were used during the war as follows: in construction work - 34%, in production - 25%, in the mining industry - 11%, in others (logging, loading and unloading, etc.) - 30 5% (V.N. Zemskov. GULAG (historical and sociological aspect) // Sociological studies. 1991, N 6. C. 10-27; 1991, N 7. C. 3-16). To characterize the level of influence of the Gulag on the country's economy, Nikolay Vert’s statement is well suited that at the time of its higher development, at the beginning of 50, the GULAG provided 100% of the country's need for platinum and diamonds, 90% in silver, 25% of non-ferrous metal mining , 12% of demand for coal and wood (Nikolai Vert. GULAG through the prism of archives. Shalamov.ru/research/61/1html). It is unlikely that these figures were lower in the war years.

In 1942, the "hard-mobilized" citizens of the USSR, the German and other nationalities of the warring countries against us, joined the ranks of the forced labor of the rear. Of these, workers' columns were formed, living behind barbed wire and working with prisoners on construction sites and in industrial workshops. The number of them for the entire war was more than 400 000 people (Zemskov). On the restoration of the destroyed economy of the USSR, prisoners of war worked side by side with other slaves of labor, the number of which, according to Wikipedia, reached 3 486 206 people (not counting the Japanese, who were also 575 000). They formed the working battalions. In 1944-1945 155 262 of able-bodied civilian Germans and “enemy elements” interned in Eastern Europe and East Prussia were added to them. Hungarian historians claim about 200 thousands of interned civilian Hungarians. True, we have not yet confirmed this information. The workers battalions were also enrolled in 1945, also about 600, thousands of Soviet citizens from among the repatriates who returned home.

Lastly, without touching the topic of the repressed for our society, let us determine the total number of citizens of the USSR who have passed through the punitive system of Stalinism. The total number of prisoners who passed through the camps and colonies of the Gulag, apparently, is already known. According to V. Rogovin, from the archival materials of the GULAG it follows that during 1921-1953 about 10 million people passed through the camps (Party of the shot. Vadim Rogovin. Web.mit.edn / people / fik / Rogovin / volume5 / pit.html) . Apparently, he included prisoners of colonies in this number. The total number of special settlers for all the years is, according to Wikipedia, more than 5 million people. To these must be added the other categories of voluntary citizens of the USSR listed above (“labor-mobilized” and repatriates) - only about 1 million people.

In the same connection, we can also mention the so-called BIRs (Correctional Work Bureau) in which, according to the Decree of the USSR Supreme Council on June 26 of the Year, workers were placed for six months who were late for work by more than 1940 minutes. Already by the beginning of the Second World War in their account was about 20 1 264 people (Zemskov). Taking this figure into account, we can conclude that more than 000 million Soviet citizens passed through various forms of forced labor in our country, not counting more than 17 million prisoners of war and about 4 thousands of interned foreigners.

Ctrl Enter
Noticed oshЫbku Highlight text and press. Ctrl + Enter
We are
About Stalin and KhrushchevOleg Valetsky about the wars in the Balkans, their causes and Russian volunteers
Military Reviewin Yandex News
Military Reviewin Google News
55 comments
Information
Dear reader, to leave comments on the publication, you must to register.