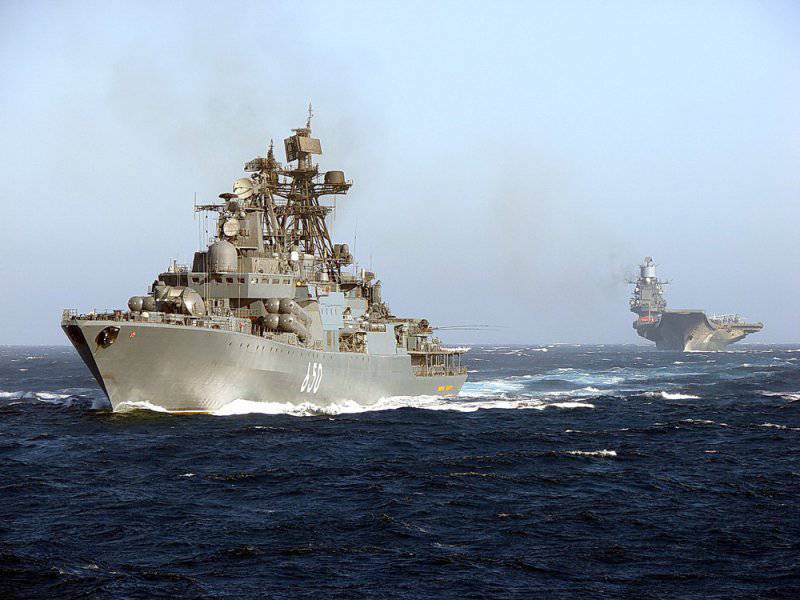 The end of the 20th century marked the end of an entire epoch, the collapse of the country laid a heavy burden on the shoulders of the people, reflected in all spheres of society from agriculture and utilities to engineering and science.

As for the armed forces, the collapse of the system and the ensuing collapse of industry brought the army to the brink of survival. But the most, in my opinion, the Navy received a heavy blow, because without proper funding fleet the ships were forced to rust at the berths, the lack of spare parts and fuel and lubricants affected the combat readiness, the installation of the ship for repair actually meant its withdrawal from the fleet, and the planned modernization was delayed for decades. Over the years, the fleet lost dozens of ships, many of which were eventually put on needles. Over the past two decades, Russia has actually lost its position not only in the oceans, but also off its shores. An example is the Black Sea basin or the Far Eastern region, where our neighbors during this time have significantly changed the balance of power in their favor.

Recently, a lot of information about laying new ships appears in the open press, but they mainly represent small displacement vessels (patrol ships, rocket boats, corvettes), whose main function is to control coastal waters. To argue about whether these ships are necessary for the fleet is meaningless, because the answer is possible only one “unequivocally YES”, but today it will be a matter of warships capable of solving a wide range of tasks. Currently, the Russian Navy has about a half dozen surface warships capable of solving tasks outside the 200-mile economic zone. The composition of the domestic surface fleet is as follows:

If in the first two fleets (Black Sea and Baltic), due to the geographical features of the water area, most of the tasks can be entrusted to “small ships” (rocket boats, small artillery ships, corvettes), for the Northern and Pacific fleets, able to solve a much larger range of tasks, including in the vast world ocean. The main purpose of these fleets is to cover the patrol areas of our SSBNs and protect the territory from the threat of attack by “likely friends” using nuclear weapons and cruise missiles. Since the main sources of threat are AUGs and submarines capable of striking targets, being thousands of kilometers away from it, solving the task of protecting the country at distant frontiers using ships whose autonomy is significantly limited (10-15 days) is hardly realizable. . To solve such problems, in my opinion, we need Ship-based Shock Groups, consisting of vessels capable of comprehensively solving the tasks of air defense, anti-submarine defense, EW, and have significant impact potential.

The other day in the media there was information about the start of the project for the deep modernization of the TARK project "Orlan" "Admiral Nakhimov", and also announced plans for a truncated modernization of the two remaining nuclear cruisers of the same project of the same project, which were preserved from the middle of 90's and planned for withdrawal from the Navy. 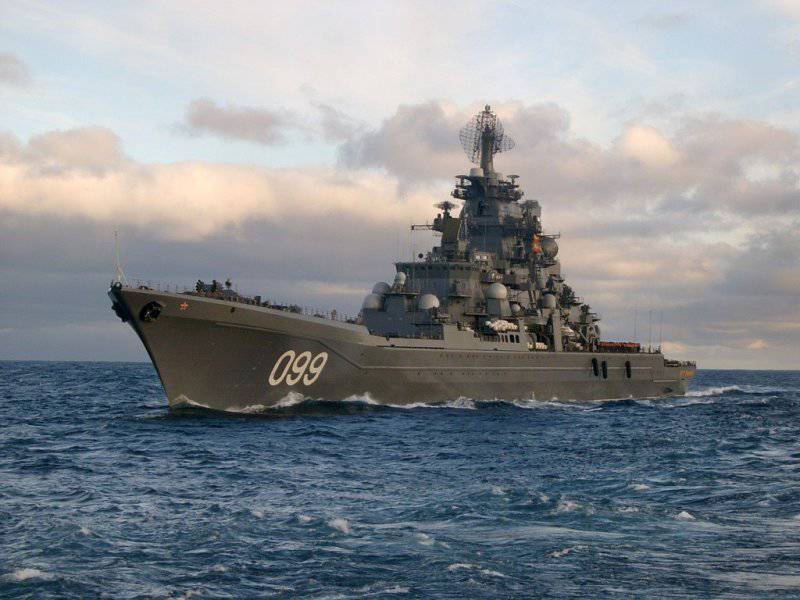 Information: The 1144 “Orlan” cruiser is a series of four highly autonomous heavy nuclear missile cruisers built at the Baltic Plant in the USSR from 1973 to 1989, the only surface ships in the Russian Navy with a nuclear power plant.

According to the NATO classification, the project is designated as English. Kirov-class battlecruiser.
The chief designer of the project was V. Ye. Yukhnin. As of 2012, only one of the four built cruisers, the TARKR Peter the Great, is in service.
Armament after modernization:
The main acquisition will be UKS - the latest universal ship shooting complexes. It will be possible to install Onyx or Caliber missiles in these launch containers, which will become the main weapons. In addition, the air defense will be enhanced: C-400 and new melee air defense systems.
In total, taking into account anti-aircraft missiles, the cruiser will carry more than 300 missiles of various types.

Representatives of this project:
Heavy nuclear missile cruiser "Kirov" ("Admiral Ushakov")
Launched: December 30 1980 of the year
Northern Fleet of the Russian Navy
Current status: With 1990 in reserve. In the sediment with 1991 year.

There is also information on the commencement and modernization of the Marshal Ustinov RK of the Atlant project, which is to be incorporated into the Pacific Fleet. Additionally, plans were made to acquire the Ukraine (former Admiral of the Navy Lobov) of the same project from Ukraine to the Republic of Kazakhstan. 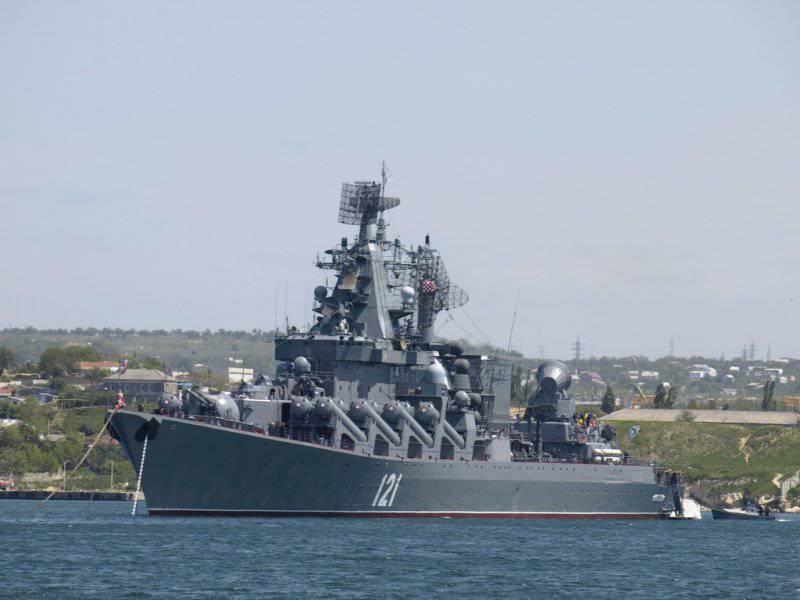 Information: The 1164 cruiser of the code “Atlant” (NATO code - the English Slava class) is a class of Soviet missile cruisers that is intermediate between ships of the “Ushakov” type (former 1144 “Orlan”, formerly “Kirov”) and destroyers of the “Modern” type (project 956). Atlant-type missile cruisers with powerful surface-to-surface missile weapons became an important part of the Russian Navy after the division of the USSR fleet.
In total, 4 cruisers of this type were built, and 3 was put into operation.

• Anti-ship - 16 launchers of the Vulkan complex (16 missile anti-ship missiles P-1000) missile weighing up to 6 tons and flying speed 3077 km / h with partial armor equipped with powerful (500 kg) conventional high-explosive-cumulative or nuclear (350 km) combat unit and is capable of hitting targets at a distance of 700 km. RCC flight to the goal is carried out on a complex trajectory. It is equipped with a remote control system and an onboard station of electronic countermeasures against the air defense systems of the attacked ship. The length of the rocket 11,7 m, the wingspan of the 2,6 m, the diameter of the rocket 0,88 m.
• Anti-submarine - two torpedo tubes (10 torpedo ammunition for enemy submarines) caliber 533 mm, length 7 m, weight 2 t, explosive charge 400 kg up to 22 km, speed up to 55 nodes (100 km / h).
• Two RBU-6000 jet bombs (96 ammunition load of rocket depth bombs, 110 kg weight, kg 25 kg weight, 1,8 m length, 212 caliber mm) depth bombs are mainly designed to protect a ship from torpedoes and submarines boats, by conducting single or salvo firing, firing range 6 km, immersion depth 500 m.
• Anti-submarine helicopter Ka-25 / Ka-27 ship-based with a hangar and a helipad.
• Two-gun shipboard artillery - 130 mm AK-130 (600 rounds of ammunition) designed for firing at sea, air and coastal targets at a distance of 24 km, fire rate / min 90 / min. The mass of the installation reaches 98 t, the mass of the projectile - 86 kg, the initial velocity of the projectile 850 m / s. The AK-130 ammunition includes unitary ammunition with a high-explosive fragmentation projectile, equipped with three types of fuses.
• Six ZAK - AK-630 (16000 ammunition cartridges for 2000 cartridges in the tape) are designed to destroy air targets, anti-ship missiles, small vessels, floating mines and lightly armored ground targets. The initial velocity of the projectile with a diameter of 30 mm, a mass of 0,834 kg reaches 900 m / s, the rate of fire 6000 rds / min range to 8 km.
• Two Osa-MA air defense missile systems (48 ammunition for missiles, 128 kg mass of a short-range missile) are designed for the ship’s self-defense against strikes of airplanes, helicopters and anti-ship missiles, as well as firing at surface targets. The combat capabilities of the air defense missile system make it possible to destroy air targets with a speed of up to 600 m / s at a distance of up to 15 km and an altitude of up to 5 km, a rocket length 3 m, and a mass of 128 kg.
• Eight C-300F “Fort” SAMs (64 missile ammunition in 8 turreted launchers under deck, length - 7,9 m, diameter - 0,34 m, weight - 1600 kg) is designed to protect ships' warrants from attacks by aircraft, cruise missiles and others means of enemy air attack, speed up to 2000 m / s, range up to 90 km and up to 25 km in height.

In my opinion, the ships of these projects, which have onboard weapons in the form of Caliber and Vulcan missile systems, as well as analogues of sea-based 400 S-AIR systems, are excellent for solving assigned tasks and can serve as the basis for the formation of shipboard attack groups.

In my opinion, the ships of these projects, which have onboard weapons in the form of Caliber and Vulcan missile systems, as well as analogues of sea-based 400 S-AIR systems, are excellent for solving assigned tasks and can serve as the basis for the formation of shipboard attack groups. 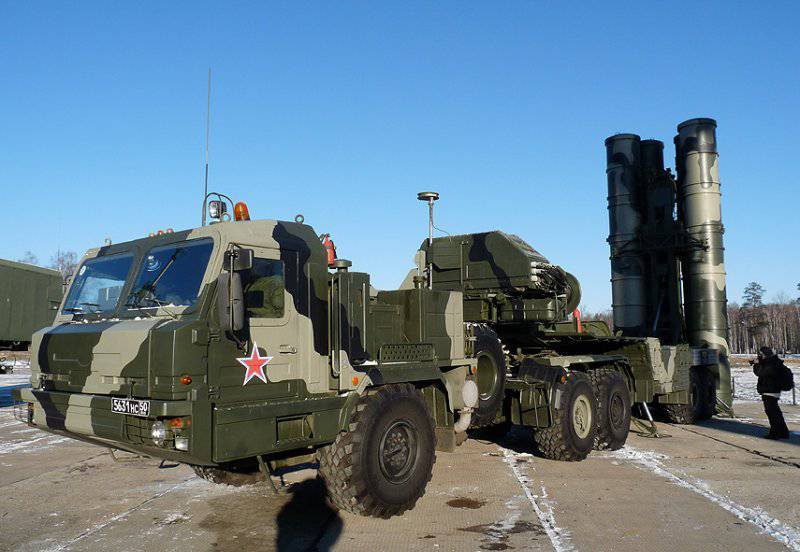 6-7 Shock Ship Groups, equipped with these vessels, accompanied by destroyers, are able to block the main shock-hazard directions in the future.

The main problem in the formation of such compounds is the almost complete absence in the Russian Navy of modern multi-purpose destroyers. At the present stage, ships of such classes, which actually have to be equipped with such Shock Groups, require first of all universality, the ability to solve a wide range of tasks, such as air defense, anti-submarine defense, EW, to have good impact potential. The destroyers (956 “Modern” project) and BOD (1155 project) that were part of the Navy began to be used more than 30 years ago and are no longer able to solve the whole range of tasks assigned to them, especially that their quantitative composition leaves much to be desired (most of the ships need major repairs or are in reserve), this is well understood by the naval leadership, which plans to modernize the ships of these projects before 2020:

EM plans to carry out repairs and upgrades, as well as reconstruct the power plant.

BOD is planned to be equipped with modern A-192 cannons, Caliber missiles and the latest air defense and missile defense system with C-400 Redut missiles.
For the introduction of modern weapons systems will have to change and ship control system, that is, almost all the electronics.
Thanks to this alteration, the BOD will actually become destroyers and will be able to destroy not only submarines, but also surface ships, airplanes, missiles and ground targets. That is, they will become universal warships.

But to carry out repairs and upgrades to infinity is impossible, no one has canceled such concepts as "metal fatigue" and "physical wear and tear." Based on the above, it is time to think about the development of the project Destroyer, which could fully combine the best domestic development and ship school, as well as incorporate foreign experience. But this project should not only be implemented on paper, but also should actually start up in a series, since it will not be possible to solve all the problems that have accumulated in the fleet in single pieces.

Summing up, I would like to look to the future with hope, since not all is lost for our fleet and the country as a whole, and the panic moods that reigned in the society some 5-10 years ago gradually fade away, because implementation of the tasks set and daily coordinated work, we are able to solve many problems, and in the next decade Russia will be able to firmly stand up and recover lost positions in the world's oceans.