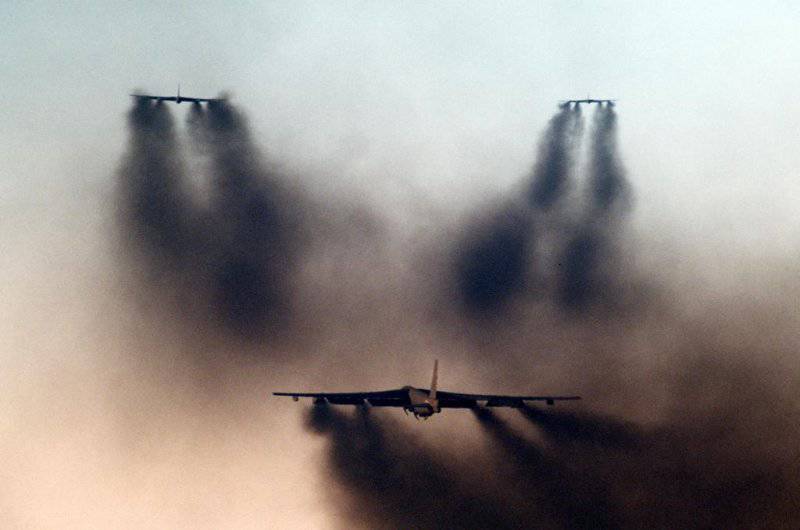 About a year ago, in ru-aviation, one of the following videos about training the US Air Force at the minimum take-off interval for B-52 and KC-135. The aim is to lift into the air from the airbase all the bombers and tankers as soon as possible (no more than 15 minutes) before they could cover the warhead from a Soviet submarine which they found, say, off the coast of California (I cite such an example his book one of the directors of Skunk Works Ben Rich). For B-52, the interval between take-offs is 12 seconds, for KC-135 - 15 seconds. Such a short time between takeoffs leads to the aircraft getting into the satellite track from the previous one and can lead to a catastrophe (which happened more than once). A large amount of soot in the exhaust of engines (see illustration) is explained by the fact that during such exercises, water is injected into engines as quickly as possible, which, on the one hand, leads to an increase in thrust, and on the other, to incomplete combustion of kerosene, and a consequence - to the formation of fine carbon.

Some very interesting videos of such trainings:

Apparently the middle of the 80-x, appreciate the fact that the aircraft really fit into the 12-15 second interval

The current time, 2009 year, all the more lazy and imposing (the interval is increased at least 2-3 times), maybe no one really expects that in the US someone will be able to pull something that will have time to fly to the center of the continent for 15 minutes