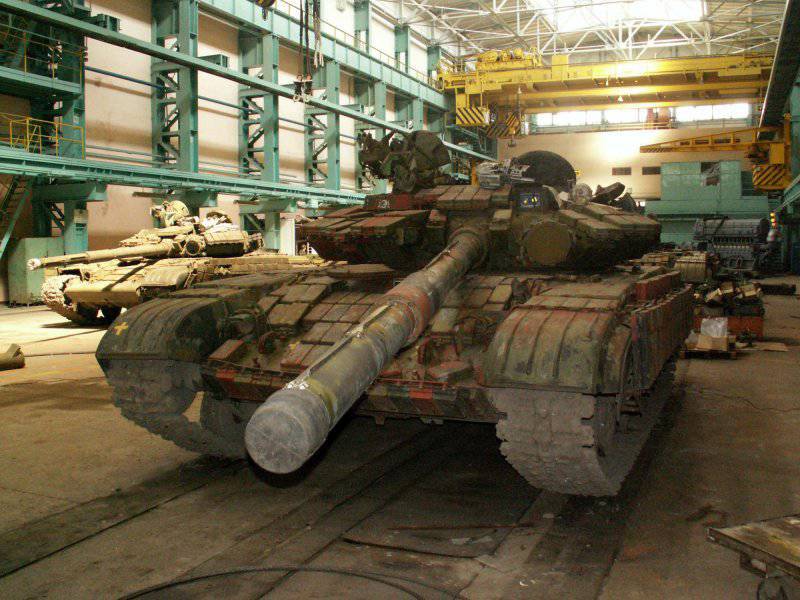 In the last days of May, 2013, the media reported that the Ukrainian Cabinet of Ministers approved the plan for the most ambitious reform of the army in all the years of the independent state. The modernization program covers the period up to the 2017 of the year and costs more than 16,3 billions of dollars. The government intends to find such a large amount in the state treasury, and also to get some of the funds from the sale of military property, which is on the balance sheet of the Ministry of Defense. I must say that the majority of Ukrainian and Russian experts say that in this way Ukraine will be able to raise funds, which will be enough to form only a small army.

Recall, after the Soviet Union ceased to exist, the newly created Ukrainian state got the armed forces, whose numbers reached 700 thousand people. In addition, the strategic nuclear forces located on Ukrainian territory contained 176 ballistic intercontinental missiles, and more than 2,5 thousands of nuclear tactical weapons. However, over time, all of these nuclear weapons were transported to Russia.

Many Ukrainian officials say that the government will be able to find the necessary funds for the modernization of the armed forces, even though at the present time for the sale of property is not an entirely favorable time. So, according to V. Kolesnichenko, the authorities are looking for additional sources of funding. However, he noted that the above amount (that is, more than 16 billion dollars) is assumed not for one year. Therefore, the politician said, if in the next few years the Ukrainian economy starts to develop, the necessary money for the defense complex will be found. In addition, Kolesnichenko noted that the department can get rid of military property, including equipment and land, which are not used MO. To this end, over the next few years it is planned to conduct an inventory and preparation of this property. First of all, according to the politician, there will be put up for sale plots that are more attractive in terms of investment, in particular, we are talking about plots in the Crimea. But military property will not be sold at a minimal cost just to get rid of it. President simply will not allow such, Kolesnichenko said.

At the same time, the deputy expressed his dissatisfaction with the situation that has now developed on navy. According to him, the fleet of the Ukrainian army has not been updated for many years. True, this year border boats came into service, and this is only a drop in the bucket. But at present the country cannot maintain a combat-ready fleet that would even remotely resemble the European or the same Turkish, because finances do not allow it. The only thing that can be done at present is to get a few corvettes and sell the rest.

It should be noted that Russia with a high degree of distrust reacted to such ambitious plans of the Ukrainian military department. As noted by the deputy director of the Institute of Military and Political Analysis, Alexander Khramchikhin, at the moment it can be said that the Ukrainian army does not exist as such. At the same time, he notes that this situation even simplifies the task of the Kiev generals, since it will be much easier to create armed forces from scratch, but it will require much more money than 16 billions of dollars. However, as the expert said, with this money you can create a small army, which is quite acceptable for Ukraine, but the problem is that such an amount cannot be found.

Khramchikhin also expressed doubt that the sale of military property and land would bring great profits, noting that Ukraine had been actively involved in this for over two decades, being one of the leading exporters of Soviet weapons and equipment. However, the amount of property sold is exactly the opposite of the amount of money received for it, then, as in the country, corruption is at a very high level.

According to the first vice-president of the Academy of geopolitical problems Konstantin Sivkov, the stated amount may well be enough to create a small full-fledged army, but such an army cannot become a real defense for the country. According to the expert, if the Ukrainian government wants to have armed forces that do not exceed one hundred thousand people, but at the same time have new modern weapons, this money may well be enough. However, if necessary, to protect state interests and the borders of such an army will simply not be able to. If the government aims to create an adequate army with a good percentage of modern weapons, then 16 billions will obviously not be enough.

Another important point of modernization is the abolition of conscription to the armed forces and the transition to a contractual basis. In addition, a significant reduction is planned - if at the moment there are about 185 thousand people in the Ukrainian army, then by the end of their modernization only 70 thousand should remain. Thus, the autumn call 2013 year will be the last, as stated by the head of state. According to him, after analyzing the latest global armed conflicts, the government came to the conclusion that victory can be achieved not due to the number of personnel, but due to the high level of training, professionalism and equipment. Therefore, the modernization of the army was conceived, the purpose of which is to review the tasks, structure and system of the country's armed forces.

We note, at present, one of the most pressing problems of the Ukrainian army is insufficient funding and, as a result, the lack of social guarantees and the low level of money support. All this leads to the fact that the morale of both officers and contract soldiers is at an extremely low level.

If we compare the armies that exist in the post-Soviet space, then only the Moldovan army has a more modest salary. Ukrainian officers receive as much per month as, for example, a contract soldier of the Kazakh armed forces receives. It makes no sense to compare the salaries of officers of the Ukrainian army and the European armed forces, because these amounts are very different.

It must be said that at the moment the government has not taken any significant steps to change the situation. So, for example, this year the military budget has left a little over two billion dollars. Therefore, to say that with such a contentment there is a chance to create a compact, but at the same time efficient army, is not worth it. However, as well as to assert that the army, in which the place of recruits will be taken by soldiers who have expressed a desire to replenish its ranks, has the right to be called a professional ...

A contract army is one in which the level of combat training is at a higher level. And if in the near future the government does not pay attention to the need to finance the military department and does not take certain steps in this direction, then the whole modernization will be a waste of time and money. According to experts, to create an army of the European level you need at least 20 billion of hryvnia funding per year. In addition, it is necessary to make maximum use of the export capabilities of the defense complex, to introduce new technologies in the army, to create national rearmament programs with permanent funding.

In addition, it is necessary that the pace of rearmament be much higher. And with such a budget that exists at the present time, one can only count on maintaining the army in a state of modernization and repair of equipment. True, in recent times, several models of new modern weapons and equipment have been received by the Ukrainian army, in particular, the Malakhit radar station, the Mi-24PU1 helicopter, the Bars-S system, the BTR-70I and BTR-4E armored personnel carriers, and work continues on programs for the construction of corvettes, tactical missile complex "Sapsan". Work was carried out to restore the order of 8,5 thousands of samples of equipment, after repair more than three dozen aircraft returned to service, about 10 ships.

Experts say that in addition to the desire to modernize the armed forces and reach the European level, the Ukrainian government has several other goals. In addition to the need to reduce the army due to the country's lack of external enemies and the lack of money for its maintenance, there is also the so-called unofficial goal. As you know, troops are an instrument of violence, even if they are enclosed in a certain legal framework. If we analyze the situation that is developing from year to year in the country, it becomes clear that in order to maintain power, the government must minimize the number of people who have access to weapons.

If we talk about ordinary Ukrainians, many of them, unfortunately, believe that military service is a waste of time. In addition, more than 72 percent are confident that an increase in the defense budget will in no way be able to affect the improvement of the state of the Ukrainian armed forces. 14 believes in this percentage of the population. Approximately 68 percent of Ukrainians are confident that the army will not be able to protect the interests of the state and the people, if necessary. Thus, the government first of all needs to set the right priorities, to understand that modernization is not just a replacement of conscripts for contract soldiers. This is an increase in the level of combat training, social guarantees and a decent monetary allowance, as well as a sincere desire to achieve the goals set ...

Ctrl Enter
Noticed oshЫbku Highlight text and press. Ctrl + Enter
We are
Memo to mercenaries in AfricaThe armed forces of Syria on the eve and during the uprising in the republic (2011 — 2013)
Military Reviewin Yandex News
Military Reviewin Google News
41 comment
Information
Dear reader, to leave comments on the publication, you must to register.