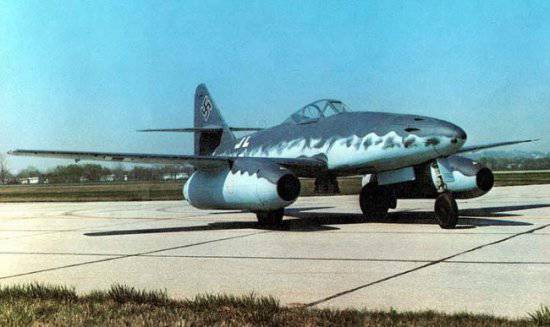 History does not tolerate the subjunctive mood, but if it were not for the indecisiveness and short-sightedness of the leadership of the Third Reich, the Luftwaffe would again, as in the first days of World War II, receive a full and unconditional air advantage.

In June, the Royal Air Force pilot, Captain Eric Brown, took off on the captured Me-1945 from the territory of occupied Germany and headed for England. From his memories: “I was very excited because it was such an unexpected turn. Previously, every German aircraft flying over the English Channel, met with a fire shaft of anti-aircraft guns. And now I flew on the most valuable German plane home. This aircraft has a rather sinister look - it looks like a shark. And after takeoff, I realized how much trouble the German pilots could deliver to us on this magnificent car. Later, I was part of a team of test pilots who were experiencing a jet Messerschmitt in Fanboro. Then I developed the 262 miles per hour (568 km / h) on it, while our best fighter developed the 795 miles per hour, which is a huge difference. It was a real quantum leap. Me-446 could have changed the course of the war, but it was too late for the Nazis. ”

In 1938, the German Armaments Directorate commissioned with the Messerschmitt AG design bureau to develop a jet fighter, on which it was planned to install the latest BMW P 3302 turbojet engines. According to the HwaA plan, BMW engines were supposed to go into mass production as early as 1940. By the end of 1941, the glider of the future interceptor fighter was ready.
Everything was ready for testing, but the constant problems of the BMW engine forced the designers of the Messerschmitt to look for a replacement. It was the Junkers Jumo-004 turbojet engine. After finalizing the design in the autumn of 1942, the Me-262 took off.
Experienced flights showed excellent results - the maximum speed approached 700 km / h. But the Minister of Arms of Germany A. Speer decided that it was too early to start mass production. It required careful revision of the aircraft and its engines.
A year has passed, the plane’s “childhood diseases” were eliminated, and Messerschmitt decided to invite the German ace, the hero of the Spanish war, Major General Adolf Galland, to the tests. After a series of flights on a modernized Me-262, he wrote a report to the commander of the Luftwaffe Göring. In his report, the German ace in enthusiastic tones argued the undoubted advantage of the newest jet interceptor over single-engine piston fighters.

Galland also offered to begin the immediate deployment of mass production of Me-262.

At the beginning of June 1943, at a meeting with the German Air Force Commander Göring, it was decided to start mass production of Me-262. At Messerschmitt AG’s factories, preparations began to assemble a new aircraft, but in September, Goering’s order came to freeze the project. Messerschmitt urgently arrived in Berlin at the rate of the Luftwaffe commander and got acquainted with the order of Hitler there. The Führer was perplexed: “Why are we not brought Me-262, when the front needs hundreds of Me-109 fighters?”

Learning about Hitler’s order to stop preparations for mass production, Adolf Galland wrote to the Führer that a fighter jet needed the Luftwaffe like air. But Hitler had already decided everything - the German Air Force does not need an interceptor, but a jet attack bomber. The tactic of "Blitzkrieg" did not give the Führer the rest, and the idea of ​​a lightning offensive, supported by the "blitz attack aircraft", firmly sat down with Hitler in the head.
In December 1943, Speer signed an order to begin the development of a high-speed jet attack aircraft based on the Me-262 interceptor.
The Messerschmitt Design Office was given a blank check, and the project funding was restored in full. But before the creators of high-speed attack aircraft had numerous problems. Because of the massive raids of Allied aviation on industrial centers in Germany, disruptions in the supply of components began. There was a shortage of chromium and nickel, which were used to make Jumo-004B turbine blades. As a result, the production of Junkers turbojet engines has dropped dramatically. In April, 1944 of the year managed to assemble only 15 pre-series attack aircraft, which were transferred to a special test unit of the Luftwaffe, which worked out the tactics of using the new jet technology.
Only in June, 1944, after transferring the production of the Jumo-004B engine to the underground plant Nordhausen, it became possible to start mass production of the Me-262.

In May 1944, Messerschmitt began developing equipment for an interceptor with bomb racks. A variant was developed with the installation on the fuselage of Me-262 two 250-kg or one 500-kg bomb. But in parallel with the draft attack bomber designers secretly from the command of the Luftwaffe continued to refine the project of the fighter.
During the inspection, which took place in July 1944 of the year, it was found that the work on the project of a reactive interceptor has not been stopped. The Fuhrer was furious, and the result of this incident was Hitler’s personal control over the Me-262 project. From now on, any change in the design of the jet Messerschmitt could only be asserted by Hitler.
In July, 1944, the Kommando Nowotny (Nowotny team) unit was created under the command of German ace Walter Novotny (258 downed enemy planes). It was equipped with thirty Me-262, equipped with bomb racks.
Before the "team Novotny" task was to check the attack in combat conditions. Novotny violated the order and used a jet as a fighter, in which he achieved considerable success. After a series of reports from the front about the successful use of Me-262 as an interceptor in November, Goering decided to order the formation of a fighter unit with reactive Messerschmitts. Also, the Luftwaffe commander managed to convince the Fuhrer to reconsider his opinion about the new aircraft. In December, the Luftwaffe 1944 adopted about three hundred Me-262 fighters, and the attack aircraft production project was closed.

In the winter of 1944, Messerschmitt AG experienced an acute problem in obtaining the components required for assembling Me-262. Allied bombers around the clock bombed German factories. In early January 1945, the HWaA decided to disperse the production of a jet fighter. Nodes for Me-262 began to be assembled in single-storey wooden buildings, nestled in the forests. The roofs of these mini-factories were painted olive-colored, and it was difficult to locate the workshops from the air. One such plant manufactured the fuselage, the other wings, the third made the final assembly. After that, the ready fighter flew into the air, using flawless German autobahns for a run.
The result of this innovation was the 850 turbojet Me-262, released from January to April 1945.

A total of 1900 instances of Me-262 were built and eleven modifications were developed. Of particular interest is the double night fighter-interceptor with a radar station "Neptune" in the nose of the fuselage. This concept of a two-seater jet fighter equipped with a powerful radar was repeated by the Americans in the 1958 year, implemented in the F-4 Phantom II model.

In the fall of 1944, the first air battles between the Me-262 and the Soviet fighters showed that the Messerschmitt was a formidable opponent. Its speed and time of climb were incomparably higher than that of Russian aircraft. After a detailed analysis of the combat capabilities of the Me-262, the Soviet Air Force commanded the pilots to open fire on the German jet fighter from the maximum distance and use the maneuver to avoid combat.
Further instructions could be taken after the Messerschmitt test, but such an opportunity came only at the end of April 1945, after the seizure of a German airfield.

The design of the Me-262 consisted of an all-metal cantilever low plane. Two Jumo-004 turbojet engines were installed under the wings, on the outside of the landing gear. Armament consisted of four 30-mm guns MK-108, mounted on the nose of the aircraft. Ammunition - 360 shells. Due to the dense layout of cannon weapons, excellent accuracy was provided when shooting at enemy targets. Also, experiments were conducted on the installation of larger-caliber guns on the Me-262.
Jet Messerschmitt was very easy to manufacture. Maximum manufacturability of nodes facilitated its assembly in the "forest plants".

With all the advantages, the Me-262 had uncorrectable flaws:
A small lifespan of the engines - only 9-10 hours of work. After that, it was required to carry out a complete disassembly of the engine and replace the turbine blades.
The large runup of the Me-262 made it vulnerable during takeoff and landing. To cover the take-off, the links of the Fw-190 fighters stood out.
Extremely high requirements for aerodrome coverage. Due to low-lying engines, any object entering the Me-262 air intake caused a breakdown.

This is interesting: on August 18, 1946 at the air parade dedicated to Air Day fleet, An I-300 (MiG-9) fighter flew over the Tushino airfield. It was equipped with an RD-20 turbojet engine - an exact copy of the German Jumo-004B. Also at the parade was presented the Yak-15, equipped with the captured BMW-003 (subsequently RD-10). It was the Yak-15 that became the first Soviet jet aircraft officially adopted by the Air Force, as well as the first jet fighter in which military pilots mastered aerobatics. The first serial Soviet fighter jets were created on the basis laid down in the Me-262 back in 1938.