17 2013 June
35
15 June in the Armed Forces of the Republic of Belarus young recruitment took the oath. Among the soldiers of the new call was my best friend. By tradition, all relatives and friends decided to attend this event. I have never been on such days in units and I expect some kind of event covered with a halo of holiday and holy trembling, as the military director Lieutenant Colonel Tevzadze told us about pre-conscription training. 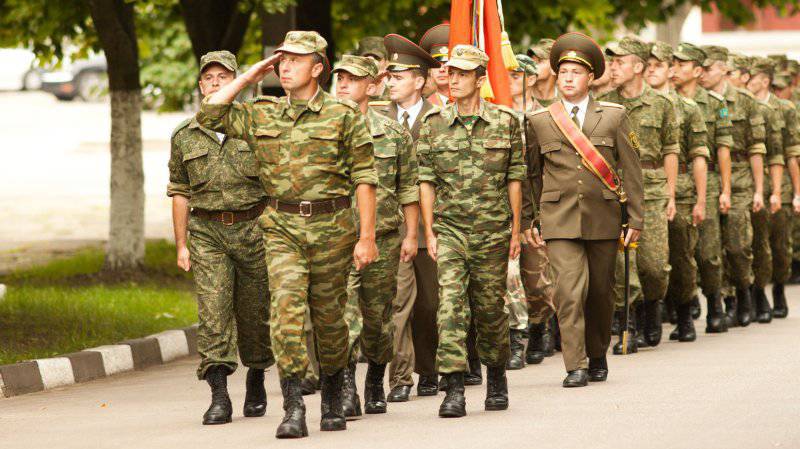 Morning. Today it was necessary to close the hospital in the clinic, so I'm a little late. Two hundred meters remained before the unit’s fence, but the sound of the orchestra, interrupted for a while, and the buzz of soldiers' voices responding to the greeting were already heard. At the checkpoint there is an officer in full dress, a cap on the back of his head, leaning on a railing. Near a couple of soldiers are bored on a bench. I go into the territory and move to the parade ground, along the way I see several tanksstanding on pedestals - a reminder of the Great Army.

From a distance I see a crowd of relatives, trying to find my own. On the podium stands the commander of the unit and tries to read something from the paper. Nothing is heard, since in the part there was only one speaker, from which the crackling sounds were pulled out. Sounds team: "To take the oath to begin!". Couples of senior servicemen trying to keep up (but they aren’t succeeding) endure tables, officers approach them and replenishment in platoons. I see Zhenya. He stands out with a stone face and a good drill line.

Began. The first fighters recite an oath, but no one hears anything, since relatives are far away from the soldiers. Then we are allowed to approach a little, but nothing changes. People crowd, swear. Two girls didn’t share something and nearly fought. A friend and I decided to step aside - still we will not hear anything, but the growth will allow at least something to see. The musicians-ensigns from the orchestra stand next to them, their hands in their pockets, talking and laughing, leaving the instruments aside. One of them in everyday life is wild for me, a holiday after all. The empty tribune is guarded by two sentries. We stand on the sidelines, roasting in the sun, waiting for the continuation of the Marlezon ballet. The oath is over, the tables removed platoons returned to the original. A general appears on the podium (shows an example to subordinates - also in everyday form), pushes speech. He is replaced by a veteran, father and priest. They are followed by a young soldier, who stambles, reading the words prepared for him. The commander of the unit comes last and commands: "To the solemn march!" ...

The passage of the boxes begins. The first are the officers, followed by the ensigns (among them a certain number of pretty girls), followed by draftees. Everyone is trying to go beautifully, but they don’t really succeed in this - it’s immediately obvious that they don’t do any drill training. Among the green people trying to see his Zhenya. He goes in the third rank of the right-flank, and we can clearly see it. It is felt that he is a responsible person. Although I didn’t really want to go to the army, I’m trying to fulfill what they were trying to teach him - my chin was raised high, my back was straight, and my step was minted. It surprises us. Really it was impossible to instruct and write documents in advance? In general, some kind of disorganization strains. There is an army, there must be order, at least in this particular case. But nothing can be done, wait. The main friend to see, for him gathered. Here he is - handsome. He comes up, takes off his hat and we fall down laughing - the lower part of the head is brown, the upper one shines with whiteness. Stood, talked. Then he spent with his parents, agreed to meet tomorrow, before his return to the unit.

In general, the impressions are not as expected. Maybe I am a romantic and wanted a lot from this day because of the films and stories of the old military? Or maybe the army has changed so much that not only do the conscripts serve without being able and reluctantly, but the officers can only take out the stew and diesel? Looking out of the corner of my eye, the desire to serve, which was so little, was finally lost. I hope that somewhere else there are real military men, like Lt. Col. Tevzadze, who serve not for a tick, but for the Motherland. I know that my friend will fulfill his duty with honor and will be an example for me.

Ctrl Enter
Noticed oshЫbku Highlight text and press. Ctrl + Enter
We are
What you didn't want to know about EnglandUkrainian army in Iraq: how it was in reality
Military Reviewin Yandex News
Military Reviewin Google News
35 comments
Information
Dear reader, to leave comments on the publication, you must to register.