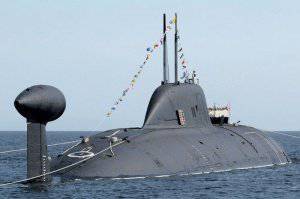 
In the newspaper “Independent Military Review” No. 16 of 17 in May, I read an article by Viktor Kuryshev “Underwater, darkness and silence».

Professionally and accessible material presented stirred up the navy community, especially veterans of the submarine fleet. And therefore, in the development and support of the article, I, as a veteran submariner, will continue this theme.

I am writing for ordinary citizens who are not indifferent to the fate of Russia and its Navy, with which Russia is connected, in fact, genetically, because it can exist only as a great maritime power. However, I first of all address the article to the Supreme Commander-in-Chief of the Armed Forces of the Russian Federation in the hope that its content will be communicated to him, because, despite the specifics, the essence of the issues raised, given their strategic importance, is the sphere of his close attention. In this regard, I would like to hope that the assistants and advisers surrounding the Russian president with a tight ring will not leave him in the invisibility zone of these problems.

I report on the problems of the Navy concerning Russia's ability to defend and protect its national interests at sea.

It is obvious that, without owning the situation in the sea and oceanic areas, where our national interests extend, it is impossible to realize and protect these interests. Of course, this requires a well-established system of lighting the situation at sea, including, naturally and above all, monitoring the underwater environment.

It should be understood that the presence and development of submarine forces presupposes the conduct of anti-submarine warfare, the success of which depends at least on the fulfillment of two mandatory conditions. One of the laws of warfare at sea claims that, all other things being equal, the chance of winning is significantly higher for the side that will find the enemy earlier and further. In order to effectively and successfully counter enemy submarines, the opposing side must have information on the position of these boats in the sea, which is possible only with a special underwater lighting system. All this is the essence of two major problems that have not been resolved in our country so far, since the beginning of work on the creation of the first nuclear submarine in September of the 1952 year.

Russia and its Navy do not have underwater lighting systems (FOSS) for the entire depth of the operational zones of the fleets and around the perimeter of Russia's maritime borders, which is the largest scientific and strategic miscalculation made more than half a century ago and still not resolved, despite to the decree of the President of the Russian Federation from 4 March 2000 of the year to create the Unified State System for Lighting Surface and Underwater Situations (EGSONPO).

Opposition to many executive structures, for a number of reasons interested in disrupting targeted activities to create an EGSONPO, led to the reiterated order of the Russian government to create an EGSONPO in one of the documents signed by Vladimir Putin in December 2010. I would like to believe that this document will be implemented.

Unlike us, the United States, having raised this problem to the rank of strategic, solved it back in the 60 – 80-ies of the last century, creating a stationary underwater observation system - SHSUS, which was increased in the following years by vessels of long-range hydro-acoustic intelligence (DGAR), continuing to develop it in the present.

The first problem is aggravated by the second one - our submarines, including the most modern ones, are significantly inferior to US submarines in the main and most important parameter determining stealth, inaccessibility, invulnerability, and therefore combat stability and combat capability, in the detection range, which is confirmed by intelligence , calculations and practice detections. At the same time, our hydroacoustic complexes (GAK) are not capable of reliably classifying targets at extreme detection ranges.

Detection of enemy submarines mounted on anti-submarine aircraft aviation The Navy is also inferior in sonar detection range to similar US anti-submarine aircraft. This leads to the lack of a lighting system for the underwater situation and excludes the possibility of continuous monitoring of the actions of foreign nuclear submarines (PLA), primarily the United States, in the patrol areas of our strategic missile carriers and in the training ranges of navies, as well as in the immediate vicinity of our territorial waters.

There are many examples. Two of the most characteristic of them. In February, the American Button-Rouge submarine, not detected by anyone, penetrates our thermal waters north of Kildin Island and faces the Russian submarine Kostroma, which our press has described in detail. The second incident occurred in August 1992. Not owning the situation and not tracking the movement of two foreign submarines (“Toledo” and “Memphis”) at our combat training grounds, the command center of the Northern Fleet failed to prevent the maneuvering of these submarines in the immediate vicinity of the Kursk submarine.

The reason in both cases was one - we do not have a system for lighting the underwater situation in either the far or the near operational zones of the fleets.
The absence of FOSS does not allow to control the launch lines of cruise missiles (KR) "Tomahawk" (North-Eastern Atlantic, Northern, Norwegian, Barents Sea, Pacific Ocean, Black Sea).

It should also be borne in mind that the Tomahawk CDs are derived from the number of strategic weapons being reduced, but at the same time they have a reserved range of flight to 2,5-3 thousand km and the possibility of installing a nuclear or special warhead instead of the usual high-explosive (reinstallation time - less than 40 minutes) , although with the presence of high-precision satellite maps of the terrain and excellent pointing accuracy, the desired effect of damage is also achieved when using a conventional warhead weighing 200-250 kg. Therefore, the Americans will never include them, as well as the X-37 spaceship, in the lists of weapons being reduced, neither under the START-3 treaty, nor under any other treaty.

The absence of FOSS eliminates the possibility of effective monitoring of the underwater environment in future areas of industrial installations on the continental and island shelves, especially in the Arctic sector of Russia, which is especially important and relevant today in connection with the conclusion of an agreement with the British on the start of development of hydrocarbon deposits.

By analogy with the ecological catastrophe in the Gulf of Mexico, it is easy to imagine the consequences of such an accident provoked by underwater sabotage forces in the Arctic in the absence of an effective underwater surveillance system.

FIGHTING SERVICE UNDER THE COVER OF PARTNERS

In peacetime, being under control, our submarines are not able to detect the fact of tracking by foreign, primarily American, submarines, which, in turn, operate freely in the near zones of the fleets and even in airfields, since we have no effective means ( FOSS), able to detect their presence.

Those few contacts with low-noise foreign PLA, which we reach at very short distances, are nothing more than detecting alien PLA that record the noise (acoustic portrait) of our submarines in the near zone, where the impact of sea noise is minimal. In the subsequent recording of these noises, they are used to identify the detected boats. In some cases, allowing themselves to be detected at short distances, they reveal the tactics of our boats.

In wartime (during an emergency), our tracked and identified submarines are immediately destroyed. At the same time, the commander of our attacked submarine cannot respond with a counterattack, since it does not have hydroacoustic contact with the attacking submarine.

In bases, our submarines and surface ships are likely to be destroyed by the Tomahawk CD from enemy submarines, whose combat positions we are unable to determine due to our lack of an underwater lighting system.

Under such circumstances, our new military doctrine, the main provisions of which are based on the current and future state of the three main components - aerospace, land and sea, takes on a truncated appearance, since the maritime component drops out of this triad due to its incapacity, since none from the fleets of Russia is not able to fully solve the tasks of the antisubmarine and anti-sabotage struggle in their operational areas due to low information capabilities in the underwater environment. Moreover, the absence of means and FOSS in the Navy also significantly cuts down the possibilities of solving the urgent problems of aerospace defense today, since the possibilities of dealing with underwater carriers of aerospace attack in the absence of an effective FOSS are close to zero.

There is no need to prove that the outfit of forces from 8 – 10 of undetectable and untraceable foreign submarines with a common Tomahawk KR ammunition over 200 units in wartime can completely constrain the actions of the Northern Fleet and civilian shipping. The enemy’s submarines will be capable of delivering cruise missiles on the most important industrial and life-supporting objects in the European part of Russia, as well as on strategic objects from tactically most advantageous areas. To prevent these actions, the Northern Fleet has neither the necessary forces nor the appropriate means.

In modern conditions it is not necessary to spend a huge amount of ammunition for the complete destruction of the selected objects. Sometimes it is enough to cause minor damage to a specific element of the object in order to cause the functioning of the entire system or infrastructure to fail.
There is no alternative to FOSS, since there are no spacecraft to illuminate the underwater environment. Anti-submarine aircraft without space forces and means of guidance and without upgrading their anti-submarine systems cannot solve this problem.

The presence of the problems outlined poses a growing threat to national security. Given the enormous length of the maritime borders of Russia, it can be argued that the greatest threat will be represented by sea directions, and above all in the underwater environment. Therefore, it is necessary to solve two strategic tasks: create a system for lighting the underwater situation in the operational zones of fleets and modernize the hydroacoustic facilities of submarines and anti-submarine aviation in order to significantly increase the detection range under water and to achieve superiority in this parameter over submarines of the United States and other states showing increased interest to the capabilities of the submarine forces of the Russian Navy and to the Russian wealth.

Today there are opportunities to solve these problems and fix problems as soon as possible. Low-cost by creating and deploying an underwater lighting system and modernization of hydroacoustic tools and systems is the use of special equipment developed on the basis of digital technology with a unique mathematical software. Modernization of hydroacoustic systems makes the creation of a Unified State System for Lighting Surface and Underwater Situations a reality, and the tasks set by Vladimir Putin are achievable.

Many veterans are convinced that modernizing the hydroacoustic facilities of the Navy cannot be put on a par with such highly worthy tactical level developments like the newest sniper rifle, or an armored personnel carrier, or even a fifth generation aircraft, since the introduction of such equipment will solve two most complicated strategic problems at sea, not resolved so far.

Despite the specifics of development, for such a few projects of a strategic level, priority conditions should be created for inclusion in the state arms program and in the state defense order. Otherwise, waiting in line for a long line of rifles, tanks, boats, fighter jets, these advanced developments run the risk of losing their relevance and importance, since any delay in their implementation will inevitably lead to the loss of the achieved superiority and the strategic lag of the country not only from the leading powers, but also from secondary and secondary states.

Ctrl Enter
Noticed oshЫbku Highlight text and press. Ctrl + Enter
We are
What you didn't want to know about EnglandThe importance of the Victory Parade in Russia is being questioned
Military Reviewin Yandex News
Military Reviewin Google News
75 comments
Information
Dear reader, to leave comments on the publication, you must sign in.