Scientific companies: with kondachka not work

17 2013 June
44
In March of this year, representatives of the educational sphere (rectors of universities) voiced the idea of ​​creating so-called scientific companies in the Russian army, in which students of various domestic universities would be involved in the service. Then, the Ministry of Defense positively assessed the proposal, saying that young specialists can effectively fit into the structure of the reformed Russian army, as today there is an acute shortage of personnel in the Armed Forces who are able to manage high-quality new equipment using modern software and hardware. 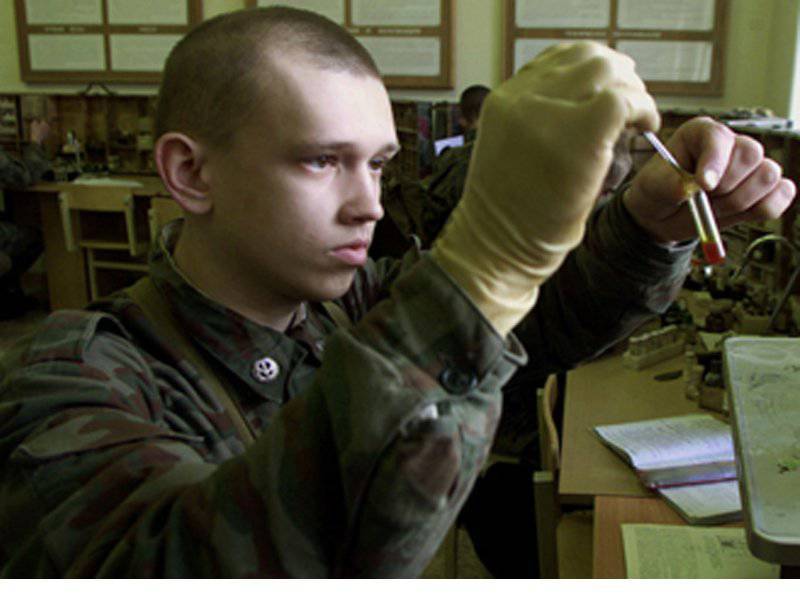 A rare case, but quite a bit of time passed between the proposal and the beginning of the realization of the idea into reality. From the Academy of the Strategic Missile Forces of the name of Peter the Great, it was reported that it was at this time that the Russian military university would create the first scientific company in Russia. The formation of the company is scheduled for autumn this year. Representatives of the Academy declare that they are already preparing for the reception of the staff of draftees, namely, special premises are being equipped, in which recruits will be placed.

Military specialists generally positively evaluate this project, stating that with the creation of scientific companies in military schools, the intellectual potential of the Russian army can increase. In addition, many of the young people who, to put it mildly, had not experienced great enthusiasm from being able to interrupt their studies in a civilian university and give back to their homeland, today can take a different look at the possibility of doing military service.
How many scientific companies will be created in the Russian army is a question for now. Everything depends not so much on the plans of the Ministry of Defense, but on the experience that the defense ministry will receive when creating a scientific company this fall. If this experience turns out to be positive, and draftees readily begin the work associated with the development and operation of new military technologies, it is obvious that the development of the idea of ​​creating the considered military formations will continue.

By the way, today, in the main military department, words are also being voiced that in the future (again, if the experience is positive), not only technical students, but also students who receive a liberal arts education can be called in to fill scientific companies. It would seem, how can the humanities show their knowledge and skills in a military environment? In fact, it can.

At least, such thoughts are expressed by many experts. In particular, RIA-News publishes the words of the chief editor of the journal "Information Wars" AVN Vladimir Prokhvadilova. He claims that humanists would be perfectly fit for military service, which today is by no means limited to controlling military equipment or using small arms. weapons. According to Prokhvatilov, soldiers called to scientific companies from humanitarian universities could act as interpreters or be recruited to solve special tasks on the Internet. After all, it is not a secret that today there are numerous sites in RuNet that are engaged in the purposeful slandering of the Russian army. For the dissemination of materials about the alleged endless violence against the rank and file and violation of human rights in the army of the Russian Federation dozens of groups are created in social networks. The propaganda machine, which sets the task of finally undermining the public support of the army, is working to its fullest. And today, sadly aware as it is, this work is bearing fruit for customers. To understand this, it is enough to look at the number of Russian draft dodgers, which in recent years has been consistently held around the 250 mark of thousands of people. But this is almost a third of the entire modern army ... The figure is just huge.

The scope of use of military personnel of the company of mouths can be very voluminous. Computer technology alone can take thousands of draftees who are addicted to solving programming problems. And there are still electronics, military medicine, the study of the properties of materials, psychological service.

Another question is to what extent will such recruits get the opportunity to realize their potential? Is it possible that scientific companies will work effectively except on paper in official reports to the leadership of the ministry? After all, we have such precedents, when even the most good undertakings turned into an attempt to implement them into some kind of pathetic similarity to what was planned at the beginning. One example is the stillborn foundation Skolkovo, which also had to gather the country's scientific elite and become a generator of ideas for the so-called innovative economy. What is the result? Years of work, billions of allocated funds, lack of intelligible programs and projects. The only thing that Skolkovtsy distinguished themselves was, perhaps, more than an impressive fee for the main lecturer of our time, Mr. Ponomarev, who at the time of the presentation of his twenty-minute lectures did not even have a higher professional education. What a nugget ...

It is the presence of such obviously corrupt connections with “nuggets” at different levels that makes one to be wary of the phrase “scientific companies”. Naturally, the actual introduction of such companies should be accompanied by the approval of intelligible programs, according to which the draftees at military high schools will work. After all, it is impossible to recruit 20-30 people from all over the country, lock them up in the barracks and say: well, salagi - give us a science! .. On the other hand, if the approach is about the same as it was (and is) in " Skolkovo ”, then we can expect such a turn of events.
Another question: if the programs of scientific and near-scientific activities of the modern Russian army are needed, then there should be people who will compile such programs. And here, God save us, learn that programs are developed under the strict guidance of the Ministry of Education and Science headed by Mr. Livanov. These developers have already managed to distinguish themselves, and therefore, with all due respect to individuals, there is no trust in the department as a whole.

So, it means that we will not build the outlined optimism about the possible creation of scientific companies in Armenia to a degree. Of course, the publication of programs of activities of military personnel in these companies is not to be expected, but we hope that these programs are already being prepared by experienced professionals, and not by those who are going to catch another financial fish in still muddy water. In general, there are more questions than answers. The military department, apparently, too. And if the Ministry of Defense really wants to achieve a quality result, you will have to pay close attention to all the issues that arise, and to solve all those problems that are already emerging, too. As they say, with the kondachka not work ...