January 10 2011
4
All modern self-propelled guns are designed to deliver short-term high-intensity fire strikes followed by a change of position (safe time spent on fire - 1 min.). Taking into account the constant growth of the automation of fire control systems and the improvement of radar reconnaissance equipment, the time to safely locate the ACS at the position is steadily reduced. One of the ways to overcome these problems is to create systems with unconventional structural layout solutions that are able to ensure the growth of firepower and reduce the time spent on the position. It was the realization of these opportunities that was laid down in the promising Russian ACS “Coalition-SV”, which was developed by the Federal State Unitary Enterprise Central Research Institute Burevestnik (N. Novgorod). According to the Minister of Defense, to date, state financing of the project has been discontinued, since it is not included in the list of priority samples of military equipment, but no official statements have been made to this effect.

For the first time, this self-propelled gun was shown on television in the program "I Serve Rossi" in March 2006. This sample layout was created on the basis of the existing MSTA-S 2C19 ACS and most likely is not final. Despite this, the concept of the layout of the new SAU is already well known.

The crew of the new ACS consists of only two people, against five in Msta-S. Jobs of crew members are located in an armored, computerized control module, which is isolated from the weapon module located in the turret and eliminates the ingress of powder gases from the gunshots. It also provides additional protection for the crew against a possible explosion in the event of contact with the ACS. 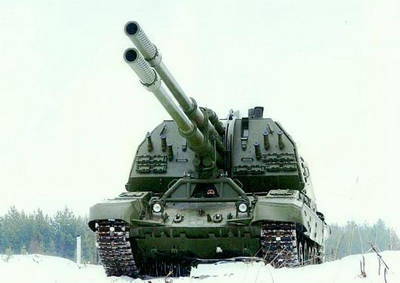 The control module is located in the bow of the hull, which is considered the safest place of the combat vehicle. The crew of two people has full control over the processes of guidance, charging and firing. This module is equipped with airborne tactical systems for selecting a target, navigation and positioning. Guided by the indications of sensors and instruments, the crew exercises complete control over the state of the ACS and the amount of ammunition for various types of shots.

Both workplaces of the crew members are equipped with remote control systems for automated fire and instrument control over the implementation of all operations performed. Information and control communication channels between the control module and the weapon module are duplicated. The design provides for the main hatches for each crew member, an evacuation hatch and a technological hatch, which provides a transition to the weapon module.

The main firepower of the self-propelled guns is located in the tower, where a twin artillery installation, a mechanized loading system and ammunition are installed. The engine is located in the stern of the combat vehicle. The most likely option seems to be that in which a promising self-propelled gun should be created on the basis of a promising tank, for the greatest unification of the engine, chassis and the main elements of the body, which can reduce the cost of production. Here are just with the development of promising models of heavy military equipment in the country in recent years, almost no progress. It appears that both are promising projects for the main battle tank of 640 Black Eagle and 195 known as T-95 are frozen or discontinued. Tank building does not seem to be a priority in implementing the existing army modernization program.

Therefore, there is every reason to fear for the fate of SAU "Coalition-SV", although in the most extreme case it can be adopted in service with the use of platforms of already existing Russian tanks.

The modular solution for control and armament units, as independent assembly units performing their functions, makes it possible to reduce the number and protection of the crew, the conditions for its operation and interaction.

The Coalition-SV ACS can be part of a self-propelled artillery complex, which will also include an armored transport and loading vehicle. So service of ACS will be provided by a sufficient number of people, despite the significant reduction in its crew. Service operations for ACS can be as automated as possible. As part of such an SAU / TZM complex, it is possible to implement a fully automated system for loading ammunition from side to side, charging and firing, which will ensure a high rate of fire.

In the opinion of domestic experts, at present, the main criteria for the creation of technology are uniformity and efficiency. When developing new 152 / 155 mm artillery stem systems, which have rigid mass-dimensional, as well as functional limitations, the efficiency increase is achieved primarily due to a radical increase in the firepower of the SAU, as the main feature of this system. 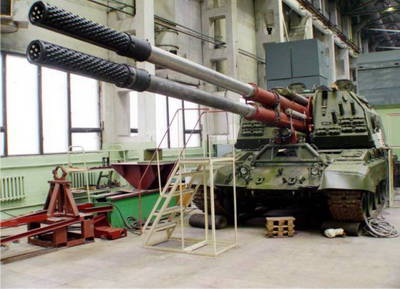 This should be done with the condition of preserving and increasing the ballistic characteristics of the weapon, which affect the rate of fire, the maximum range of fire, as the main properties that mainly affect the solution of the set fire problem.

But for the joint development of these characteristics, there are certain problems that are caused by functional and weight and size limitations, typical of most ACS. These problems are associated, firstly, with the rapid overheating and deterioration of the barrel and its channel, and secondly, with the exhaustion of reserves to increase the rate of fire when using charge shots using traditional technological solutions.

To solve these problems, domestic designers turned to the idea of ​​creating a multi-barreled "Coalition-SV" system using unconventional design and layout schemes that allow maintaining the acceptable weight and dimensions of the ACS at the level of the existing "Msty-S".

ACS with twin guns caliber 152 / 155 mm. allows you to increase the rate of fire due to the possibility of simultaneous charging of the two barrels (shooting is carried out in turn), which brings a similar SAU on firepower to volley fire systems while maintaining high accuracy of fire due to a rifled stem system. At the same time, what is important, the dimensions and mass are preserved, which are close to the traditional single-barreled systems.

This solution is distinguished by increased reliability as well as combat survivability due to the use of two largely independent systems formed by autonomous units (two independent charging and projectile warheads. 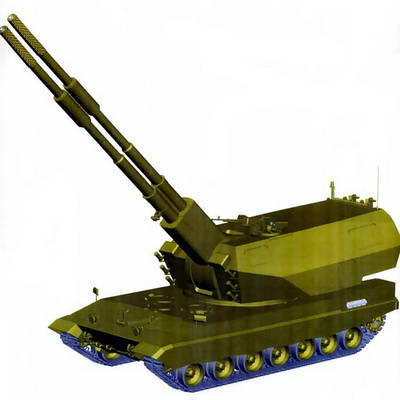 This layout allows you to increase the effectiveness of firing in the "barrage of fire" or "fire raid", which is realized by achieving the maximum rate of fire for the same target using shots at different charge numbers and at different angles of elevation of the artillery system trunks. In this case, the effect is achieved when the shells of the released line approach the target almost simultaneously, which allows for an extremely high probability of its destruction.

The mass of the self-propelled guns with twin artillery installation is fully comparable with the masses of the classic self-propelled guns. This makes it possible to achieve the use of high-strength steels to create barrels, unified with the steel used for the production of tank guns. At the same time, the external contour of the shafts is minimized, ensuring pressure retention. The breech, whose function is the charging rammer, is excluded from the design of the guns. In the manufacture of the cradle used materials with high specific stiffness, for example, composite.
Ctrl Enter
Noticed oshЫbku Highlight text and press. Ctrl + Enter
Military Reviewin Yandex News
Military Reviewin Yandex Zen
4 comments
Ad