The United States wants to fight with Syria? 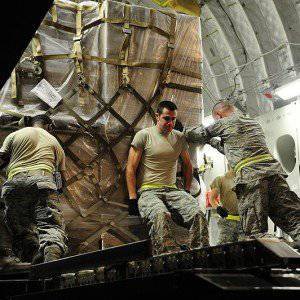 Decision by the US administration to supply some species weapons The Syrian rebels evoked a wide variety of interpretations and assessments. This was also facilitated by the fact that senators J. McCain and L. Graham hastened to declare that the United States should not limit itself to increasing the volume of assistance to the Syrian opposition, but to undertake a military operation — to deliver cruise missile attacks on Syrian government troops. “Arms supplies alone are not enough to change the balance of power, not in Assad’s favor.” The President must assemble an international coalition to take military action and deprive Assad of the opportunity to use Aviation and ballistic missiles, deploy and supply troops. This can be done, as we have repeatedly said, with the use of long-range weapons, such as cruise missiles, ”said a joint statement by McCain and Graham. At the same time, information began to come from Washington that the United States was allegedly considering the introduction of a no-fly zone over Syria, which, possibly, would extend to the area near the Syrian-Jordanian border. At the same time, in areas that will then be under the control of the rebels, it is planned to place an interim Syrian rebel government.


And then many analysts, including Russian, began talking about the Iraqi or Libyan scenario of overthrowing the ruling regime against Damascus. But is this true, and how similar is this step in relation to ATS?

Of course, no one can rule out that the United States will act in accordance with the current situation, although they do not have any UN Security Council decision that could legitimize a foreign military invasion of Syria. However, so far it is hard to believe. Therefore, the United States will most likely act slyly, starting in the very near future, supplying arms to the rebels, and their informational support to the rebels will be even more active using modern information flow manipulation technologies.

But in any case, another thing is completely obvious - Washington clearly does not intend or does not want to work seriously with Russia on a peaceful settlement of the Syrian conflict, although in recent weeks he has been in active contact with Moscow regarding the convening of the Geneva-2 conference. But the Americans obviously want to add fuel to the fire of war in order to designate their presence in the Syrian conflict and look good in front of their allies in the Wahhabi-French-British coalition.

The reason for the decision of the Obama administration was the recent serious successes of the Syrian army in the defeat of many militant opposition groups and the restoration of government control over many important areas of the country. It became clear that if this continues, the insurgents will soon be driven underground, turning to guerrilla warfare and terrorist attacks, and this will ultimately lead them to leave the stage as a political force.

It is clear that the US allies in the face of Britain, France, Qatar and Saudi Arabia can not and do not want to allow it. After all, this would mean the complete collapse of their political line in the Middle East over the past 3 years, and the end of the “Arab spring”. Moreover, in neighboring Turkey, which was the main base of the Syrian opposition and a transit point for transporting weapons to Syria to the militants, the processes of their own “revolutionary spring” began, which for some time led Ankara out of participation in the fight against Assad.

In addition, inside the United States, President Obama faced daily powerful criticism of various “hawks” who, through the media, accused him of not wanting to get into the Syrian conflict by military means. Therefore, he had to go in part for propaganda reasons to such a decision that contradicts the norms of international law and clearly does not correspond to his personal perception of what should be the policy of Washington in the Arab region.

So the White House said on Friday that by using chemical weapons, the Syrian government crossed the borders set by the US, and America will respond to that. Although no serious evidence of this has been provided. Here any excuse was needed to somehow explain such an extravagant decision. At the same time, on Thursday, Deputy National Security Advisor to the President of the United States, Ben Rhodes, made it clear that the introduction of a no-fly zone is not an effective solution to the Syrian conflict and may incur more costs than a similar operation in Libya. Thus, a piece was thrown "hawks", and Obama appeared before the voters a strong leader. But at the same time, the boundaries of the American intervention were determined very clearly - the American soldiers would not step on the Syrian land. Afghanistan and Iraq have not passed without a trace. And the majority of Americans in this matter together with Obama - they do not need another war in which American soldiers will die.

However, one should not underestimate the importance of the decision of the White House. Indeed, among the weapons that the United States intends to supply the rebels supposedly include MANPADS, anti-tank guided missiles and light armored vehicles. And this is not so harmless. And in Damascus they will be forced to look for methods of neutralizing this in order to prevent a change in the military balance of power, which is now on the side of the legitimate government. Under these conditions, Russia, which has already expressed its sharply negative attitude toward Obama’s decision, may well help the Syrian authorities in strengthening the Syrian army’s combat power with more modern weapons. And Iran will not stand aside either.

The EU’s attitude to the White House’s decision is clearly ambiguous. NATO has already seen a split between the Franco-British “crusaders”, relying on the Wahhabis - this is truly the alliance of Satan and Shaitan! - and the healthy forces of Europe, which do not want wars and conflicts. After all, you need to solve your problems associated with the economic crisis. And discord in the West only weakens the positions of the US and the EU, not to mention NATO, in a world where China plays an increasingly active role.

So far, it takes time to assess the consequences of the current decision of Washington and see how it will be implemented in practice. Most likely, the White House, shouting loudly and belligerently for internal and external consumption, will take a pause for now. It is unlikely that before the beginning of August the United States will begin supplying weapons to the opposition. And during this time, I want to believe, the Syrian army will be able to inflict a serious defeat on the alliance of radicals, cannibals, terrorists, foreign mercenaries and just international trash. And then the “whole market” about the democratization of Syria and the “bloody dictator Asad” will finally move to the five-star Doha hotels and to the Jazeera TV channel, from which the usual angry speeches with calls for jihad will flow. In Qatar, after all, they are ready to substitute a vest to those who want to cry about failed dreams to seize power, and even give them money, so they don’t get too upset. Unless a change of power takes place in Qatar by this time, as many media have been talking about for two weeks, and the new ruler, whom Prince Tamim must become, will not change his country's attitude to foreign policy. Otherwise, the gas "dwarf" can burst from the strain and delusions of grandeur.

Ctrl Enter
Noticed oshЫbku Highlight text and press. Ctrl + Enter
We are
The eternal loser. The Life and Amazing Adventures of John McCainInterview by President Bashar Al-Assad to the Sunday Times
Military Reviewin Yandex News
Military Reviewin Google News
54 comments
Information
Dear reader, to leave comments on the publication, you must to register.