Syria calls to condemn the massacre, and the United States are moving to insolent threats 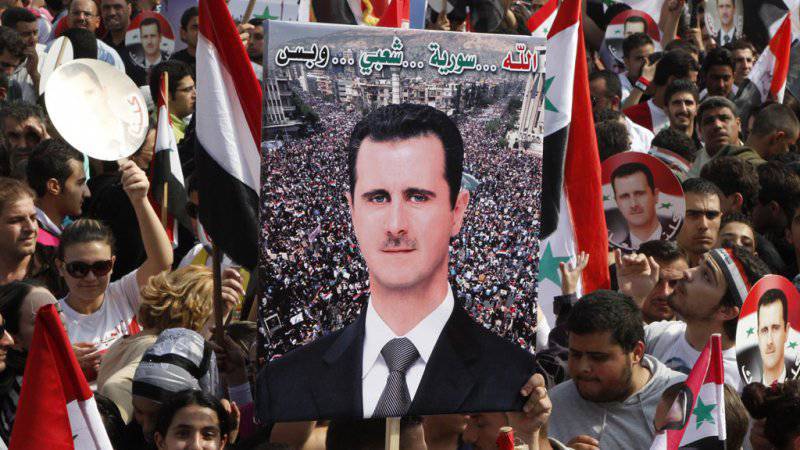 13 June in the city of Deir ez-Zor, its inhabitants took to the streets. They were holding flags and posters in support of the Syrian army. The demonstrators angrily condemned the terrible crime of the “opposition” - the day before, in the small village of Hatla near Deir ez-Zor, the militants staged a barbaric massacre, killing 30 civilians - women, old people, children ...

The SAR foreign affairs department recalled that the representatives of Syria had repeatedly spoken about the danger of terrorism and provided evidence of crimes committed by armed gangs.

“When some states refuse to condemn such actions, they thereby encourage terrorists to continue to commit similar crimes against innocent citizens,” the epistles said.

The Syrian side has accused the EU, Qatar, Turkey and Saudi Arabia of openly supporting terrorism, as evidenced by the arming and financing of terrorists, the EU’s decision to lift the supply embargo weapons the militants and the possibility of buying stolen Syrian oil thugs, so that they then with this money to buy weapons. All this is a violation of international law and UN resolutions, in which states are obliged to fight international terrorism.

“Calls of some countries to arming the opposition or announcing their readiness to assist it on the pretext of changing the military balance are exposing not only the support of terrorists, but also the hidden intentions of these countries to block efforts to achieve a political resolution of the crisis by the Syrians themselves,” the Foreign Ministry said.

Syria calls on the UN Security Council to condemn the massacre in the village of Khatla and to stop supporting terrorism that poses a threat not only to the SAR itself, but also to the security of the entire region.

The countries that support terrorism, do it all the brazen and shameless. The more bloody crimes committed by the “oppositionists”, the stronger the calls in the West to support these bandits.

The US is again raising the issue of the use of chemical weapons by the Syrian army. There is no evidence for this, except the mythical "intelligence data." Based on similar data, the States committed numerous war crimes in Iraq. No chemical weapons were found, but hundreds of thousands of people became victims of American intervention.

Unfortunately, the war criminals led by former US President George W. Bush were not responsible for their atrocities, for the barbaric violence against the Middle Eastern country, which turned out to be innocent of what it was accused of. And such impunity can generate new war crimes on the part of the United States.

State Department spokeswoman Jennifer Psaki said at a briefing that Washington intends to increase assistance to the so-called "Syrian opposition", including with weapons. Obama's Deputy National Security Advisor, Ben Rhodes, confirmed that Obama intends to increase his support for terrorists. According to him, this is due to some "intelligence" about the use of chemical weapons by the Syrian army. Allegedly, Syria has crossed some kind of "red line". In addition, the threats about the introduction of a “no-fly zone” against the country — that is, about “democratization” with the help of cruise missiles and “tomahawks” —reamed again.

On the other hand, the French Foreign Minister, Laurent Fabius, in recent days also spoke out saying that “it is necessary to prevent the victory of the Syrian army in the city of Aleppo,” and for this all means are good.

Another country with a long-standing colonization tradition - Britain - through the mouth of Foreign Minister William Hague, said that a decision on the possible supply of weapons to the militants would be made after the planned international conference on Syria, Geneva-2. That is, these international players act like petty and cunning cheats, in fact declaring in advance that all the diplomatic rules are on their side, and they will always remove the right card from the sleeve. Usually, in the course of a serious game, such dodgers were beaten.

Yes, the victory of the Syrian army over the terrorists is what worries the United States, France, Britain and other predatory states wishing to eliminate Syria as a state. The US State Department at the official level was forced to recognize these successes. But they do not fit into any colonial plans. Therefore, the “hawks” with invasive manners make such noise and shout, as if the SAR army is standing near Paris and Washington, and does not restore order in the territory of its own cities.

At the same time, the crimes of the Erdogan regime against the people of Turkey, where the brutal dispersal of popular demonstrations continues, are completely ignored. After all, Turkey is a loyal member of NATO, and "the crow does not eat out a crow."

The so-called "opposition" of Syria does not at all hide whose maid it is. The so-called “commander of the free Syrian army” Salim Idris turned to the United States, France and Britain for help, providing a list of the desired weapons. According to The Wall Street Journal, Idris said that he needed Russian-made 200 anti-tank missiles "Konkurs" (!), 100 man-portable air defense systems, 300 thousands of Kalashnikov cartridges, 50 thousands of machine guns and 100 thousand rounds for other small arms. In addition, the leader of the illegal armed groups once again called on the West to establish a no-fly zone over Syria.

Not weak appetites from the leader, fighting against his own country. And, cursing Russia, this “opposition” still does not want any, but Russian weapons! But there is still a rule in the world that weapons sold to one country cannot be sold by this country to anyone else. But for the collective sharper, the rules exist only to break them.

Together with the recurring theme of the “Syrian chemical weapons” in the information war against the SAR, such a powerful tool as statistics is used. So, UN High Commissioner for Human Rights Navi Pillay said the other day that thousands of people were victims of the conflict in Syria from March 2011 to the end of April 2013.

On this occasion, Syrian Deputy Foreign Minister Faisal Al-Mekdad said that the statistics are too high. It is used to justify interference in the internal affairs of a country. "No one has exact data on the number of people killed during the conflict, and I believe that speculations dominate in this area, aimed at intimidating people, distorting the picture of current events, and also to justify the invasion of Syria," he said.

According to Al-Mekdad, statistics is not the main thing. The death of every citizen is an irreparable loss for Syria.

And it is precisely to such irreplaceable losses that those who threaten the country, promise new weapons to the bandit rebels, are striving, inspiring them to commit even more serious crimes.

Syrians are responding with dignity to these new threats. They know that the United States and Western countries have been assisting terrorists for a long time, and it doesn’t matter whether it is done in secret or in public. The open support of the "opposition" by the United States and the West can only repel many of those people who have been misled and thought that the "oppositionists" might be right in some way.

In addition, such statements by the United States untie the hands of the allies of Syria. First of all - Russia. Now, if the Russian Federation supplies weapons to the legitimate government of Syria, it will be much more difficult for the West to present any claims to it. Such claims can be answered with the words of Krylov: “Isn't it better to be yourself, godfather, to turn?”