And again, the Ukrainian mercenaries ... 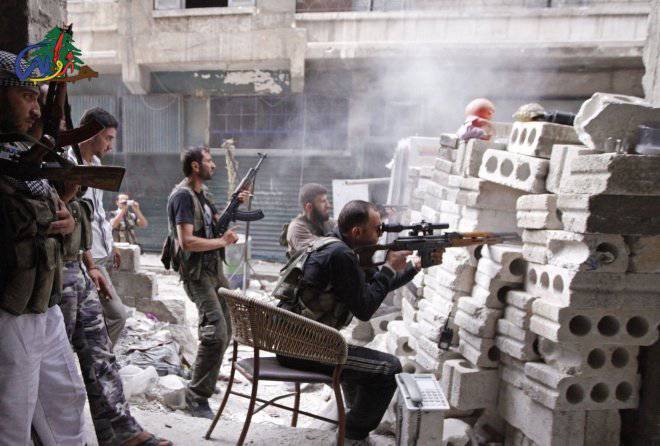 Ukrainian mercenaries again "lit up", this time in Syria. The fact that Ukrainian citizens who profess the Muslim religion involved in the civil war in Syria became known more than a month ago. At the same time, neither the representatives of the Ministry of Foreign Affairs of Ukraine, nor other officials have in a word confirmed the presence in the state of organizations that would be engaged in propaganda or recruitment of mercenaries.

However, the truth still surfaced. In April, evidence appeared in the Ukrainian media that Ukrainian mercenaries not only actively participate in the conflict, but also die. So, in particular, there was information about the death of 20-year-old Crimean Abdulla Dzheparov. According to the friends of the deceased, about two years ago, the young man began to communicate closely with representatives of an Islamist organization called Hizb ut-Tahrir, having gone to religion with his head. One of the friends of the deceased told that initially the organization conducted classes on religion, and then they switched to physical training. Then, at the end of the summer of 2012, Abdullah left the territory of the Crimea and in general of Ukraine, allegedly having gone to Turkey to work. However, two weeks later, his relatives received a telegram stating that the young man had died, having blown up by a mine in Syria. In addition to Abdullah, at about the same time six more people left, but it was not possible to establish what happened to them, the Ukrainian media.

According to the chairman of the Mejlis, MP Mustafa Dzhemilev, he is aware of the death of the Crimean guy. He also noted that he was aware that they had buried him in Syria, because there were no legal rights to transport the body to his homeland in Crimea. And this is true: the fact is that Ukrainian citizens are not legally entitled to take part in armed conflicts that occur in the world as mercenaries (that is, if their participation as peacekeepers is not sanctioned at the state level). Ukraine takes the position of neutrality, professing the principle of non-interference in the internal affairs of other states. Moreover, according to Ukrainian law, a person who recruits people for participation in foreign armed conflicts may receive a prison sentence (3-8 years). If a person voluntarily took part in a war outside the state as a mercenary, then on his return he may also end up in prison for a period from 5 to 10 years. However, as noted by officials, not a single case of mercenary has been officially proved. In addition, all those who officially took part in armed conflicts abroad were part of peacekeeping missions authorized by the state.

But, it is authentically known that, for example, in 1994, an Azerbaijani named Fizuli Verdiyev, who was recruiting Ukrainian mercenaries for participation in the Azerbaijani-Armenian conflict, was arrested in the Ukrainian capital in the Ukrainian capital. At about the same time, an entire recruitment network was opened, which was engaged in supplying fighters for the Karabakh conflict. Also, a number of media and public organizations have information that Ukrainian mercenaries took part in the Georgian conflict in 2008, fought in Iraq, Afghanistan and Libya ...

It should be noted that the scandal with the participation of Ukrainian mercenaries - this is not all that Ukraine is accused of. When the information appeared that a chemical weaponIn most Western countries and in America, suspicions arose that chemical weapons could be supplied to Syria by Kiev.

In addition, according to the veteran of the Ukrainian intelligence service Sergei Razumovsky, events can develop as follows: after they find these chemical weapons on the Syrian territory, they will surely be Soviet-made. Of course, an international scandal cannot be avoided, and invariably the question arises: how did these weapons fall into Syria. Unfortunately, according to the intelligence officer, the answer will be obvious: it was supplied from Ukraine.

This scandal will be much more powerful than история with deliveries of Kolchug during the years of Kuchma’s presidency. And there is nothing strange in this, because Kolchuga is a means of antimissile defense, that is, a defensive means, and whether or not to supply it, Ukraine has the right to decide on its own. As for chemical weapons, there can be no doubt, because it is prohibited by international law. Thus, to hush up the situation will not work. And no explanation that this weapon got into the conflict zone solely due to the negligence of some responsible persons will not help. The West does not believe such explanations. And it may well use this conflict to put pressure on the Ukrainian government ...

It should be noted that Syria is far from the only zone of armed conflict in which Ukrainian mercenaries were directly involved. However, the Ukrainian government is silent about these facts. In particular, there are numerous wars on the African continent, in particular, in 1994, in Rwanda. That war was perhaps the most cynical and bloody. And then there was no difference who to kill, black or white, killed everyone. According to the existing information, former military special services, representatives of the Airborne Forces and ULB, who had excellent special training but were left without state support after the collapse of the Soviet Union, were transferred from Ukraine to Rwanda. And they had no choice but to look for, where to make money. And since nothing else, except how to kill, they did not know how, they became mercenaries. But all these people could not even imagine that money-hungry, just as poor as the top military ranks themselves mercenaries would give all the money to themselves, putting the so-called “wild geese” “at the expense” ... So, probably, it would have happened if it were not for the fact that among the mercenaries there were fighters who had family ties with higher ranks ...

The few who managed to come alive to their native land did not have to return to normal life. After experiencing nightmares, seeing constant bloody squabbles, many of them were hooked up on drugs even during the war. In another way, it was impossible to endure the constant sight of blood and at night to wake up from the screams of children. Therefore, probably none of the law-enforcement Ukrainian bodies are afraid that any of the survivors will tell about the deliveries of mercenaries to the zones of armed conflicts. Even in the event that the mercenaries describe this or that special operation in which he had the opportunity to participate in the smallest details, he would simply be declared a drug addict and a schizophrenic who had seen enough of the films and confused reality with the fictional world.

There is another, much greater danger, but not for the officials, but for the civilian population. People who have tasted the taste of blood will want to experience these sensations again. It turns out that many former mercenaries commit crimes in a peaceful life, and even after serving a sentence, they do not take the path of correction. But even despite the fact that the Ukrainian criminal legislation provides for serious punishments for mercenaries and recruiters, and at least once every few years, a scandal with Ukrainian mercenaries breaks out, for some reason nothing changes ...

Ctrl Enter
Noticed oshЫbku Highlight text and press. Ctrl + Enter
We are
Memo to mercenaries in AfricaGood luck soldiers, “wild swans”, “dogs of war” ... Mercenaries - who are they?
Military Reviewin Yandex News
Military Reviewin Google News
68 comments
Information
Dear reader, to leave comments on the publication, you must to register.