The war in Syria - to be! And the reason? 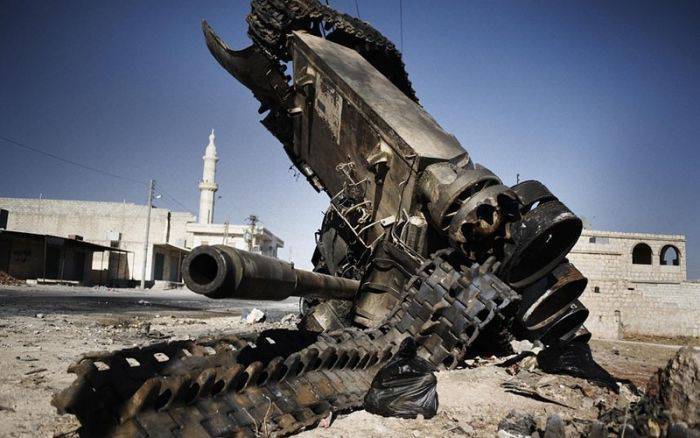 What is your evidence?

The recent report of the UN Commission, the essence of which boiled down to the fact that both sides of the conflict used chemical weapons on the territory of the Syrian Arab Republic, turned out to be very expected. At the same time, any evidence of the use of chemical weapons by the government army in the report is mentioned very mediocre.

I admit, I did not read the report. But, the indirect evidence presented to the simple viewer as the first truth was very amusing. Here and the French television report, in which the militants in front of the camera defiantly put on gas masks, and later, under the journalist's comments that: “The fighters with the regime got into the affected area of ​​government shells stuffed with chemical weapons ...” just as defiantly run and shoot somewhere— Then go to the side not covered by the camera lens. Strange, because the viewer would really like to see what or who smokes so behind the scenes?

Even more amused by the French results of samples taken from the place of the projectile's rupture with sarin, which in March claimed dozens of lives of innocent Syrians. In the samples were actually detected particles of gas. The results were also transferred to the US intelligence services as irrefutable evidence of the use of chemical weapons ... by the Syrian government army.

However, the Americans at the time recognized these results as unconvincing. It even pleasantly surprised many intelligent people. But, as there is nothing eternal under the moon, so there is nothing eternal in the conclusions of the American experts, who literally today declared that they have irreconcilable evidence of the use of chemical weapons, a surprise, by the Syrian government army.

Apparently, the American experts once again re-read the French report, and seeing in the “Guilty” column the necessary structure, they drastically changed their plans. This means that all possible “red lines” have been passed, after crossing which, the Nobel Peace Prize winner and a staunch pacifist - Barack Obama, almost agree to supply all the weapons needed by terrorists, and moreover, he is ready to shoot down Syrian airplanes and helicopters.

Surprisingly logical is the subsequent statement by militant representatives on participation in the Geneva-2 peace conference. Participate before receiving the first batch of weapons in the peace conference none of the militants intend to.

The game on our field

And in fact, no one in the West takes it seriously. A vivid confirmation of this is the complete disregard of the evidence that was collected and personally handed over to the camera by the UN commission on investigating the use of chemical weapons in Syria, the Russian journalist Anastasia Popova.

A flash drive with video footage showing video footage of the consequences of the March chemical attack of terrorists: civilians with signs of sarin poisoning, doctors commenting on the situation, as well as the very place of the fall of the projectile with yellowed earth, as it was written earlier not logged in

Later, a Russian journalist on the sidelines asked a representative of the commission a logical question: “Well, and?”, To which an equally complete answer was received in the spirit: “There was a lot of video! And we just did not have time to get acquainted with them! ”Bravo!

In addition, we should also recall the reaction of Western representatives to the statement by Russian Foreign Minister Sergei Lavrov regarding the need to thoroughly investigate the case of terrorists arrested in Turkey who were detained in a territory with several sarin cylinders bordering Syria. The reaction of the West has been reduced to something like the following: “Yes, yes, it is obligatory!”

The security services of Turkey, embarrassed before the West, also promptly worked. The detainees were released, and allegations of several kilograms of poison gas were found to be “misinterpreted.”

Consequences of the game

As a result, in fact, we have increased diplomatic pressure exerted on Syria by the West. The term “Protection against chemical weapons” is heard in each of his statements on issues related to international intervention in Syria.

Here you and the deployment of missile systems "Patriot" in Turkey to protect against "chemical shells", which can release the government army of Syria. Here is also an occasion for mass exercises involving the US military in Jordan with the development of situations to combat the consequences of the possible use of chemical weapons. And again, the deployment of Patriot missile systems on the territory of the above-named state.

At the same time, representatives of the NATO bloc and, in fact, the UN insistently demand that the Syrian government give international inspectors access to the entire territory of Syria to investigate the criminal activities of the “Bloody Regime” (see “Legal Government”) and, in fact, possible misconduct on the part of the “Democratic revolutionaries "(see." Those same carrion-eaters ").

In parallel with these events, many politicians, both in the US and in Europe, are demanding to bomb practically all Syria so that the Syrian people will not suffer from poisonous gases. Humanism for what it is.

To talk about all the diplomatic "chemical" overtures to Syria is simply not interesting. It is more interesting to look at the consequences of these phrases.

In the United States, in principle, a formal decision has been taken on the armed support of terrorists operating in Syria. In parallel with this, without being able to present clear evidence of the use of chemical weapons by the Syrian government army, the West is stirring up public opinion regarding the need to protect Syrians from "themselves" by conducting armed intervention with limited forces. Although, somewhere the author of this material had a chance to read that for such an action it would be necessary to introduce into the territory of Syria about eighty thousand western soldiers.

Not in words, but in fact, the US is equipping its neighbors with Syria with the necessary weapons for intervention, while at the same time Russia, through the mouth of its leader, is still intending to deliver missile weapons to Syria.

And so it turns out that the clouds are gathering over Syria. And as before the coming rain, a dryish taste of such a deja vu arises in the air, connected with the Iraq events of a decade ago.

I think it makes no sense to talk about them.

However, one important “BUT!” Is evident. This is Russia's position vis-à-vis Syria, thanks to which the conflict in Syria also recalls the numerous conflicts of the Cold War era, during which the Great Powers, by filling the region with necessary weapons, defended their own interests . The consequence of such measures were protracted conflicts, which were resolved only as a result of the crisis in one of the Great Powers.

What we have today: The economic crisis in Europe and the United States, the relative growth of Russia. And as you know, the best way to get out of any crisis is a good war. What we have at the moment: the Syrian government army is advancing, Russia is increasing its presence in the Mediterranean, which means that the balance is on our side.

And losing to the West is death like. So on the agenda is the "Chemical Theme in Syria". Not to be confused with Iraq 2003 of the year. But do not forget how bitter experience.

Ctrl Enter
Noticed a mistake Highlight text and press. Ctrl + Enter
We are
Armor is strong. Report from the armored plant, where equipment is repaired for ATO (Ukraine)About Stalin and Khrushchev
42 comments
Information
Dear reader, to leave comments on the publication, you must to register.