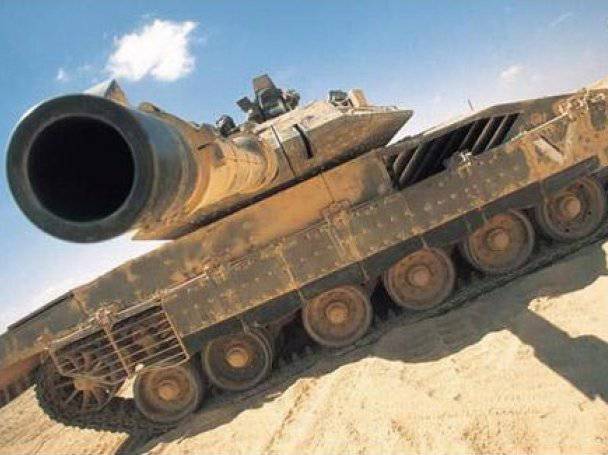 In connection with the discussion of the article devoted to the constructive vulnerabilities of the main AOI combat vehicle “Merkava Mk.4”, and raising questions about the methods of anti-tank combat, a continuation of this article describing the peculiarities of the impact of a volume explosion and kinetic shells on armored vehicles with front-mounted engines is offered to attention. offices (MTO).

At present, ammunition of volumetric explosion has become widespread in the armies of many states, including the countries of the Middle East. The range of ammunition includes hand grenades, rocket launchers, guided missiles, artillery shells, rockets and aviation Bombs. 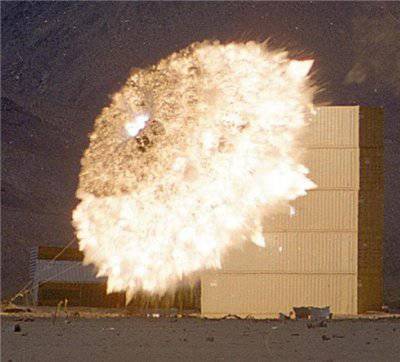 Ammunition of a volume explosion is divided into two groups - volume-detonating and thermobaric.

Thermobaric ammunition contains sprayed fuel and oxidizer, as well as the charge of explosive - sprayer / detonator, works in two stages:
- undermining the explosive charge and spraying the fuel-oxidant mixture;
- explosive combustion of the mixture in the front of the shock wave.

The minimum weight of thermobaric ammunition can be 100 grams. The only drawback is two times less TNT equivalent than the volume-detonating ammunition due to less involvement of oxygen in the process of burning. 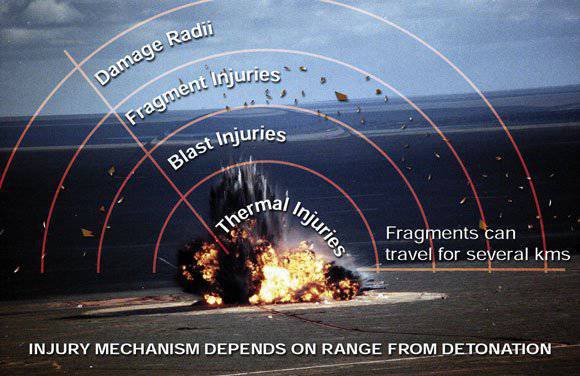 In addition, there are specialized hand-held rocket launchers of the type RPO PDM-A “Shmel-M”. The thermobaric warhead of the rocket grenade with the TNT equivalent of 9,6 kg includes the sprayed mixture — fine powder of magnesium and aluminum (fuel) and isopropyl nitrate (oxidizer) with a mass of 3,2 kg, as well as an okfola charge (explosive) with a mass of 0,6 kg.

The explosive combustion of the fuel-oxidative mixture creates in the epicenter pressure up to 100 kgf / sq. Cm and a temperature of the order of 800 degrees Celsius. At the periphery of the explosion, the pressure decreases to 1 kgf / sq. In an explosion in a confined space, thermobaric ammunition affects military equipment, including the breaking through of 10-mm steel armor.

Tanks with front-mounted MTOs during a frontal attack, they are exposed to a volume explosion by sucking the fuel-oxidative mixture into the engine air path and into the cooled MTO volume, after which the mixture explodes under the influence of a detonation wave from detonating explosive ordnance or from contact with heated engine surfaces.

On the contrary, tanks with rear MTO in a frontal attack with a volume explosion ammunition are protected from suction of the fuel and oxidative mixture by the screen of the hull and turret, which prevent the mixture from spreading in the direction of the MTO. 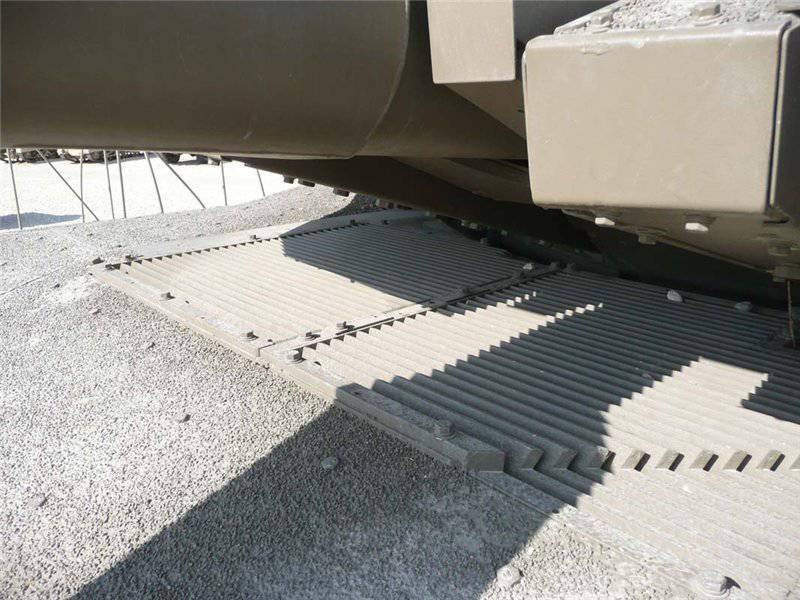 The tank "Merkava" intake air to power the engine through a horizontal opening in the roof of the hull, located on the front right. Air is taken in to cool the engine through the front vertical opening in the right sponson of the housing. Therefore, the layout features of the Merkava tank, which distinguish it from all other main battle tanks with the classic layout, make it possible to defeat MTO with the help of a volume explosion ammunition directed to the upper front or right side projection of the Merkava. 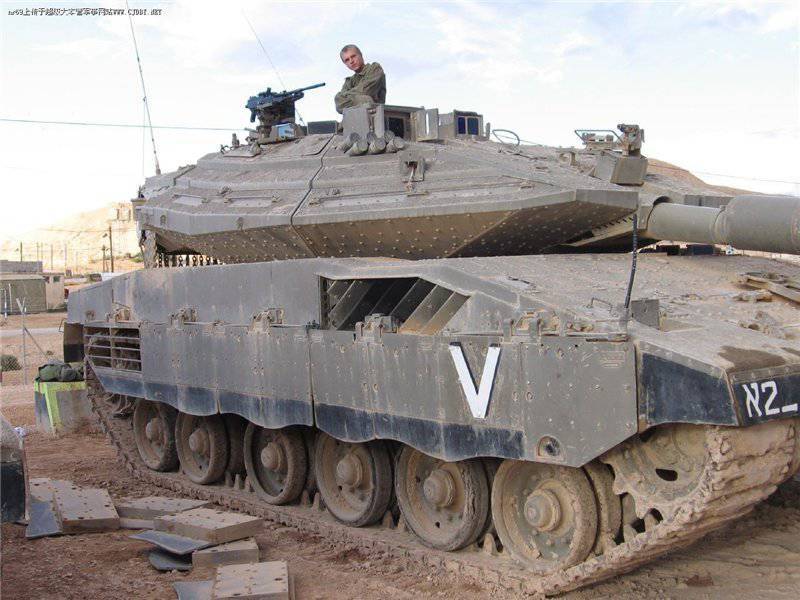 Naturally, before firing a rocket-propelled grenade or guided missile, it is necessary to neutralize the standard system of the SAZ Trophy. Existing large-caliber sniper rifles with high-multiplicity optical sights make it possible to disable openly located SAZ radars at a distance of up to 2000 meters. As such, we can consider the rifle TSR-50 caliber 12,7 mm produced by the United Arab Emirates.

An internal explosion of the fuel-oxidative mixture in the air path of the engine disables it and requires subsequent overhaul. An internal explosion in the cooled volume of the MTO is fraught with failure of the automatic fire extinguishing system, damage to the fuel lines and ignition of diesel fuel. 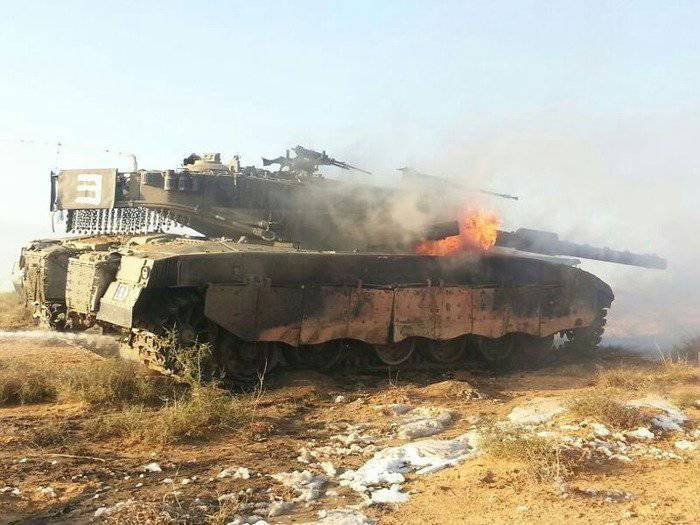 As shown by documentary footage of extinguishing a fire in the MTO "Merkava" with a failed fire extinguishing system, it is possible to extinguish the flames only by eliminating the flow of air by putting the machine to sleep. In the event of a fire at a tank-based location, a construction excavator was used. On the battlefield, MTO will completely burn out, with a high probability of fire, an ammunition of shots in contact with the partition between the MTO and the fighting compartment, since the burning time clearly exceeds the guaranteed 45 minutes of fire resistance of fiberglass containers of shots. 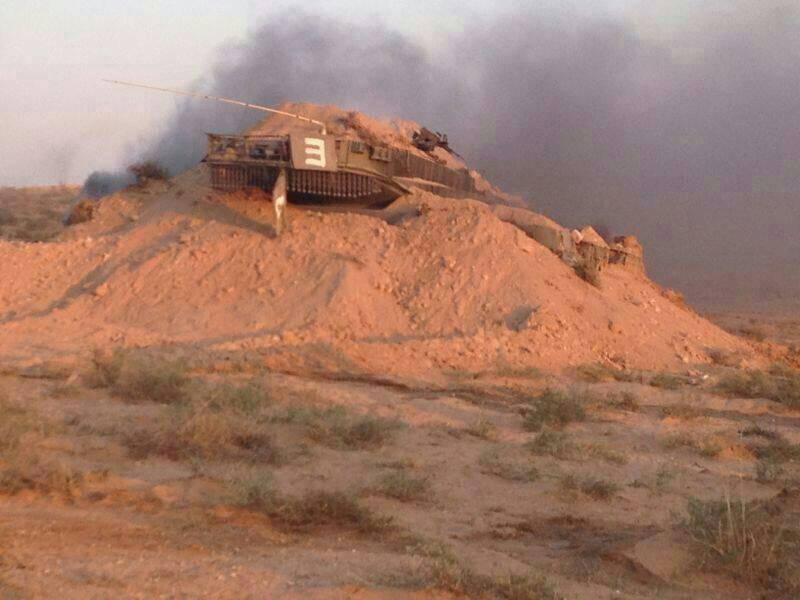 The effect of the use of a thermobaric rocket grenade / guided missile is also a multiple decrease in the need for ammunition to destroy one Merkava tank. As is known, in the Second Lebanon War 2006 of the year, to ensure the loss of progress of one tank, it was necessary to make on average up to ten accurate shots of Kornet-E anti-tank systems with a tandem cumulative warhead. The weakened cumulative jet, if it penetrated the composite exploded protection, in most cases could not destroy the internal equipment of the tank or cause a fire that was beyond the capacity of an automatic fire extinguishing system.

In contrast to the cumulative thermobaric ammunition with a single accurate hit, it provides at least a loss of travel, and, at maximum, a fire of the Merkava tank.

The only tactical method that allows you to avoid defeat of MTO by a volume explosion ammunition is the withdrawal of Merkava tanks for a distance exceeding the range of an aimed shot from a large-caliber sniper rifle, i.e. over a distance of 2000 meters. For the future, it is possible to predict the appearance of special anti-radar warheads of the ATGM with ready-made attack elements having a range of up to 4-6 km and undermined even before the missile enters the SAZ of the tank.

At large distances, the influence of the heat flux from the engine in front of the engine on the clarity of the target image in the Merkava sight, located to the right of the gun, significantly increases. In order to eliminate this influence, the crew is forced to turn the tank hull twenty or more degrees to the left from the direction of the horizontal guidance of the gun. At the same time, the hull forehead protected by the engine goes away, and the lightly armored hull board turns out to be in the enemy's line of fire.

In this position, the diversified protection of the Merkava board (a composite screen of the order of 70 mm and steel armor of 80 mm) is punched through the 120-125 mm with a stencil armor-piercing projectile from a distance of the order of 3-4 km. While the combined frontal armor protection of the hull and turret of main battle tanks with a classic layout, firing without turning the cannon on its side, equivalent to 1000 or more millimeters of steel armor, does not penetrate at a specified distance with projectiles fired from the Merkava gun.

In this regard, for the AOI for the period up to 2020 of the year (the planned launch date for the new Rakia tank), it is important to replace the Merkava with another armored vehicle - a full-featured OBT to directly support infantry on the battlefield, especially in urban areas . The most suitable candidate from the point of view of accessibility is the American Abrams tank in the modification M1A2 CEP TUSK with tandem dynamic protection of the ARAT-2 sides. 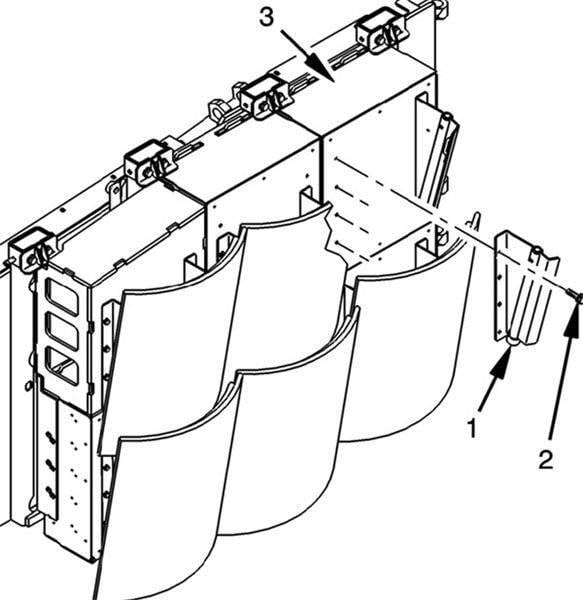 The likelihood of such a decision in the near future is evidenced by the US actions to create advanced warehouses of military equipment, including tanks, on Israeli territory, with the officially declared goal of accelerating the air movement of US military personnel to the Middle East in the event of a military conflict. But, most likely, it is planned to create an armored reserve for the Israel Defense Forces in the event of large-scale combat losses of Merkava tanks.