Movies are the most important of the arts: to the show about the war in the spirit of sensation 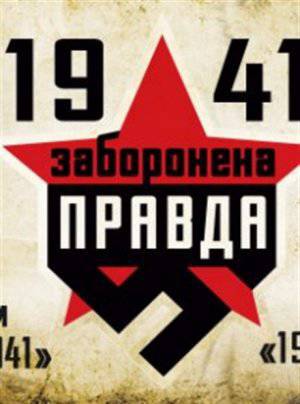 Even the most stupid design can be done masterfully. There are, for example, a television director, whose professional development comes at the height of the “documentary” about giant rats in the Moscow metro, the abduction of homo sapiens by unidentified flying objects, the secrets of fishmen and the breaking of covers from stories. And, let's say, such a director receives an order to create a documentary series about the Great Patriotic War from the Ukrainian channel, owned by the country's largest oligarch. Is it possible to make such a film in a sensational format?


Recall that the yard 2013-th year. Everything that can be exposed has long been exposed. Archives, on closeness of which they blamed before, opened. Key memes: the USSR began the war, Marshal Zhukov showered the enemies with corpses, SMERSH is identical to the Gestapo - not just known to the reader, but in the light version are already present in the school textbook.

At first glance, the task of shocking the viewer is initially impossible. However, the movie “1941. The forbidden truth proves the opposite by its existence. Its creator (yes, the name of this laureate of many Soviet, Ukrainian and international awards will be erased from human memory) has found author solutions that really introduce scenes into the documentary that have not become prohibited only due to lack of understanding of the criminal code in the current version.

In the Forbidden Truth TV series, the Red Army shoots 14-year-olds while retreating. Adolf Hitler loses World War II only because he is afraid of abandoning sabotage teams in the Gulag area and freeing millions of Soviet prisoners. And he is afraid because he understands: these free people will sweep away his totalitarian regime in the same way as the Bolshevik power. The catastrophic failures of the Red Army in the first days of the war are connected ... And try to guess what they are connected with. Not with surprise attacks. Not with a high level of training of the enemy, who conquered all of Europe before. Not with that, of course, the banal fact that the Wehrmacht had a three-to-fourfold superiority in forces in the places of the main attack. And where he didn’t, the situation was far from the classic blitzkrieg. No - the June 1941 disaster of the year was provoked by the activities of the anti-Soviet underground, which instantly intensified with the start of the war.

The fact that, according to the film, ours are exactly on the western side of the front (and everything is fine with them in 1941 year), against the background of all the above, does not cause any special complaints. Such a view would have the right to exist. Be it honestly justified (why the author identifies himself with those who tried to conquer his own homeland) and expressed correctly, at least from a historical point of view.

In all respects, the 5-serial fiction film, shot in the spirit of the battle of psychics, could be put on a par with similar creations, but it’s still on a different theme. On the historical. And what history means for politics is well demonstrated by a recent sociological survey describing the attitude to the disintegration of the Soviet Union in the context of the political preferences of the respondents.

In total in Ukraine there are 41% of those who regret the collapse of the USSR, but they are distributed very unevenly among the parties. Among supporters of "Freedom" such 5%. Among the communists - 81%. In the Party of Regions - 58%. By "Batkivschyna" and "Stroke" indicators 26% and 21%, respectively. But if party sympathies correlate with attitudes toward the USSR, then this rule obviously works in a different direction. That is, attitude to the past (in this case, the Soviet one) influences party sympathies. Shaping attitudes towards historical events, including such as the Great Patriotic War, can influence political orientation.

This is not a discovery, and few people will deny the role of perception of history on the formation of a citizen. And the role of films as well. However, in the figures of party sympathies, it looks even clearer. Ultimately, the signal that is sent in the form of a historical film (school lesson, book, speech), according to the reported vessels, should sooner or later reach the political self-determination of the citizen.

It is clear that the effect of individual actions is scanty. The “Forbidden Truth” pinches some microscopic fraction from the desired 41% - and slightly outweighs the alignment of political forces in a particular republic. Unless, of course, will not cause a backlash. There are already all claims to the mastery of the director, who for some reason decided to squeeze out a few sensational discoveries from 1941, instead of working on a school textbook. But in principle - it works. And it can not work.

Ctrl Enter
Noticed oshЫbku Highlight text and press. Ctrl + Enter
We are
Director of "Penalty" Nicholas Dostal: "History should be the way it is"Tales of Chapai ... or how history is ridiculed
Military Reviewin Yandex News
Military Reviewin Google News
50 comments
Information
Dear reader, to leave comments on the publication, you must to register.