US will increase the pace of production of fighter F-35 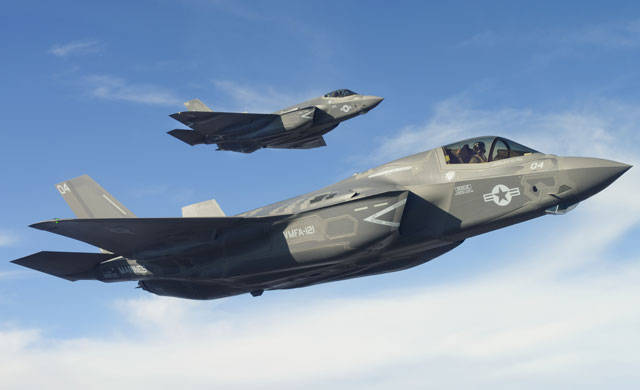 US Deputy Secretary of Defense for Procurement, Technology and Logistics Frank Kendall (Frank Kendall) expressed "cautious optimism" that the F-35 fighter "made enough progress in its development" and the Pentagon, since 2015, may increase the pace of procurement, reports today flightglobal.com.


“At the moment I can say that we can increase the pace of production, as planned. The development of the program is close to the planned pace, but several systems are a little behind schedule, but not dramatic, ”Kendall said. The decision of the Pentagon will be reflected in the budget message of the President of 2015 of the year. This means that in 2015, the Pentagon will buy 42 aircraft, in 2016, 62, in 2017, 76 and 2018, 100. Currently, the production rate is 29 machines per year, plus a few for foreign customers.

Kendall admitted that cuts in the military budget are a problem, but the Pentagon will do everything possible to increase production rates. "F-35 is our priority system weapons in the field of conventional weapons. In connection with this approach, we will do everything we can to protect the program from cuts, ”he said.

The head of defense procurement also acknowledged that the F-35 still has a long way to go. Fighters completed the entire 40% of the planned volume of flight tests, many more aerodynamic and strength tests needed to be performed, software development and testing and weapons integration would continue. The development of the next block of software was behind schedule on 45 days, but "there is nothing dramatic that could disrupt the program," Kendall said. “It’s too early to declare victory, but the program is on a much more solid basis than it was two years ago, but there are still many risks,” Kendall summed up.

Ctrl Enter
Noticed oshЫbku Highlight text and press. Ctrl + Enter
We are
The Pentagon is seriously concerned about the rapid development of hypersonic weapons in China
Military Reviewin Yandex News
Military Reviewin Google News
37 comments
Information
Dear reader, to leave comments on the publication, you must sign in.