Alone and without weapons

"SUSANIN" HAS DECORATED TO THE DUDAEV PALACE


“I got into the army right after graduation,” Rinat says. - Got to Samara sergeant school. Six months later, at the end of the "training" was sent to the division of the North Caucasian Military District.

Our military unit was located in Volgograd. For more than 6 months, I trained young cadres as a castle platoon of the artillery intelligence control battery. For good service, in November 1994 was encouraged by 10-day home leave. It so happened that I returned to the military unit just in time for the beginning of the turmoil in Ichkeria. Rumors spread that our division might be transferred to Chechnya.

Young CSKA did not explain anything. Simply 2 weeks before the new 1995 year, the guys were ordered to dive into the trains and the composition moved in an unknown direction. 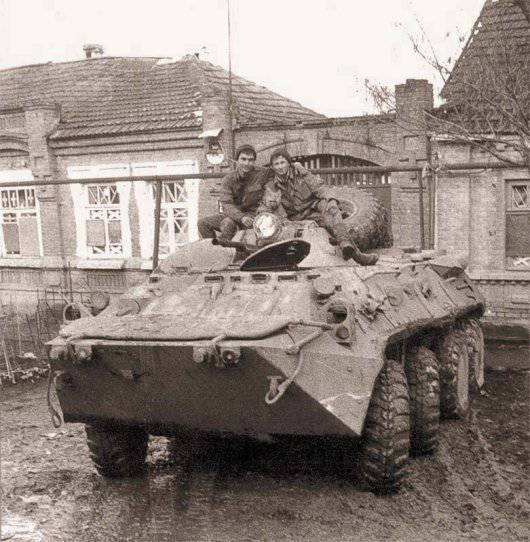 “The day went by. What awaits the war and did not guess. Arrived in Mozdok, reached Pervomaisky. Almost a week lived here in an abandoned pioneer camp. They were already pretending how to celebrate the new year, but on December 30 in a hurry (even the suhpay did not have time to distribute) the column moved towards Grozny.

Already after 2 hours, Rinat realized that he had hit the “hot spot”. The Russian convoy (15 machines) was fired from a mortar "Czechs".

- Toward evening, we drove to the outskirts of Grozny. And immediately the first car in the column was hit. The BTR caught fire, the movement stalled. We started shooting. And here on the radio report that "our" seized the cannery and artillery reconnaissance should keep this fighting position.

The colonel, in whose guard I served, immediately laid out a map of the city and “figured out” on it where to go. He said that the plant is located two blocks from our current location.

And since the advanced car burned and blocked the way, then we decided to make our way to the plant on our BTR, which closed the column.

In the front compartment of the BTR there was a driver, a colonel, and a signalman, and I got into the rear compartment of the vehicle. In short, I don’t know how the colonel was guided on the map, but he led us, like Ivan Susanin, to where ours were not. Ahead was not a cannery, but a huge palace of Dudayev ...

Here we were hit. Caught from a grenade launcher in the engine. The armored vehicle stalled, and its rear compartment, where I was sitting, flared up.

It was possible to move to our “colonel’s” compartment only from above, through the hatch, which meant certain death — an incessant fire was being fired at the APC.

However, I didn’t smile too, and sit to roast alive. I realized that I still have to go outside. Worse, it is necessary to jump out under the bullets with one grenade, without a machine gun - weapon out of order. And, was, was not ...

Jumped out of the hatch and slid down to the ground. I am lying, trying to find my way where the Chechens are watered with lead. Scorched from the side of the high-rise under the number 13 (here and do not believe in signs later!).

He decided to hide from the fire behind the wheel of his BTR. I see how the bullets bounce off the armor, and some of them fly in centimeters from my head. In general, not a comfortable state. Although I didn’t feel fear then, I thought unaccountably: “Now they crash, now they crash”.
Next to our wrecked car, another Russian tank was burning.

Dead soldiers burned with a tank. Apparently, they also tried to escape, but they were "removed" by snipers.

Realizing that the armored personnel carrier was a bad shelter, he looked back over his shoulder and saw the ruins of a five-story building ten meters away. Short dashes - to the ruins of the building, there collapsed behind a pile of bricks. But the Chechens noticed the movement and opened up such dense fire for me that they could not breathe around from the barbed brick dust. While they were spending the bullets on my destruction, a tank approached our BTRu. Stopped close with a fuming machine. I looked, mine — Colonel Susanin, the signalman and the driver — jumped into this tank and drove off. And for me thrashed with might and main from the skyscraper, you can not rise in any way. In general, the tank left, and I stayed.

“SOLDIER, DON'T KILL! WE ARE PEACEFUL

Here I was really scared. I think it’s good that I’ve seen my family, I went on vacation.

It's getting dark. Fearfully. I lie, do not move. Chechens apparently thought I was killed, do not fit.

At night, he crawled to his BTRu, climbed into the first compartment, and here again, machine guns pounded around. Notice!

I heard, it crashed - from a grenade launcher jumped. Got on an armored personnel carrier. I looked into the loophole go. 5 militants: scream, shoot on the go at the open hatch. Bullets like grapes roll on my head. The thought burned: now everything is for sure ...

And suddenly a tank appeared at the beginning of the street. Stood in the distance, turned the barrel in our direction. And the Chechens got up, and I see what happens next. It is not clear after all - whose came: their own or others?

In short, they fired from a tank at random. The Chechens ran one way, and I jumped out of the car and rushed into the other. Again to the "inhabited" ruins. A tank stood for a minute and went about his business.

I lay, lay - tired. I decided to explore the situation, orient myself where I am, because I have no idea: where are ours, where are not ours. Here I hear voices, someone in the Chechen is talking. I looked at my right - the door to the basement. He pulled at himself - locked. Without hesitation, knocked the door, I run into the dungeon - in the hand of a grenade.

And in the basement - the locals. Ten people intimidated to death: men, women, children.

- Soldier! We are peaceful! We are against war. Dont kill!

- Yes, I also seem to be particularly unwilling to fight, - I answer. - Better tell me where are those whose positions?

The basements themselves do not know who shoots from where: “We lived in this five-story building. Then the house was blown up. Now we sit, we are afraid to leave. Everyone can kill both theirs and Russians. ”

I got out of the shelter. I decided to wait for the offensive "feds".

Scary. By morning, again to the BTR native pulled. Again closed in the "colonel" compartment, looking into the loophole.

As it dawned, ours went on the offensive. Moving column. I ran to meet the joys. The armored personnel carriers stopped, but far away — about a hundred meters from me. And then the “Czechs” started shooting again. The column "backed away" and disappeared around the bend. I again remained standing between life and death.

"YOUR SON GOT WITHOUT LEADING ..."

Finally, an hour and a half later, a Russian tank approached my burned-out BTR. I again ran out of the ruins. The guys opened the hatch. "Alive? Whole? - shout. “Where are you from here?” Showing on a padded BTR. 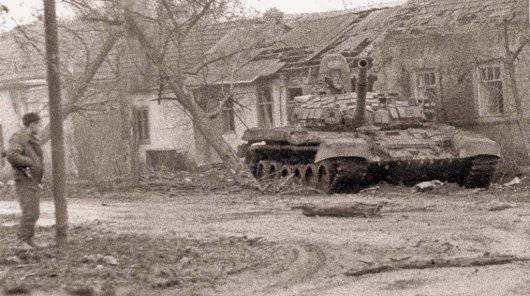 In general, the fighters of a special department, the Volgograd guys, picked me up, as it turned out. Was taken to the cannery. (Finally got to the place!). I met acquaintances of familiar boys here, they quickly explained everything to the authorities: how they threw theirs onto the battlefield, and how I spent the whole day with one grenade on the territory controlled by the “Czechs”. I was immediately enrolled in the special department. With this part, I also fought 4 of the month in Grozny.

And even by chance he met with the commander of his artillery intelligence. It turns out that I have been listed as missing for a month already. Already the command of my home letter prepared. Good not sent away.

And on January 27, 1995, I received the medal “For Courage” in Grozny. War correspondents shot the plot, history my recorded. And they showed everything according to ORT. ”

As Rinat Bakirov was awarded a medal, almost all of Krivoyere saw on TV. Only Rinat’s mother, unaware that her son was in Chechnya, did not watch that day. news from the hot spot. Villagers "enlightened" Bakirov: go, call, congratulate. The mother’s answer to all the talk about the son-hero was tears. She prayed to see him alive. And he came back without a scratch.

He does not want to hear about war and the army any more: “They are still offering to serve as a contract soldier. But I do not need this. Though they promise decent money. But then, in 1995, I didn’t receive a penny in Chechnya for half a year. ”

February 23 Rinat Bakirov considers a special day: “I think I deserve this holiday. I experienced myself. Checked for strength. And I made my conclusion about war: it is not scary because death is everywhere, but because you live without plans for the future, without dreams, without perspective, you live in the same day, the present, every minute, every second "...

Now Rinat Bakirov - 27 (article 2003 of the year - approx. "Courage"). He lives in the parental home (Kryvozerye village, Lyambirsky district), completes in absentia 4 the course of the Faculty of Economics with a degree in finance and credit (Moscow State University named after NP Ogarev). In general, a completely civilian person. Meanwhile, in his native village, Rinata, not without pride, they are hailing the hero of the first Chechen war and retelling with satisfaction the circumstances of the feat of their resourceful countryman.

Ctrl Enter
Noticed oshЫbku Highlight text and press. Ctrl + Enter
We are
Father toldAbout the German army, or How I served in the Bundeswehr
Military Reviewin Yandex News
Military Reviewin Google News
44 comments
Information
Dear reader, to leave comments on the publication, you must to register.