Kiloton class competition. Russian bomb RS-26 against the American B-61

14 2013 June
14
By the end of 90, all members of the “nuclear club”, without exception, were faced with the problem of the aging of their arsenals. During an official visit to Moscow in 2001, former US Secretary of Defense Donald Rumsfeld in one of his interviews assessed the current state of affairs: “There may be problems with reliability and safety weapons. Both the United States and Russia have these problems. I can say that there are practically no people left in the United States who are capable of producing nuclear weapons. They quit, and if it now turns out that our nuclear weapons are unreliable, then it will take a long time until we can create new ones. This is a real problem. ”


Rumsfeld made this statement after he retired "the last of the Mohicans" - the 77-year-old head of the Livermore National Laboratory Seymour Sack - a talented physicist, the developer of most of the currently armed with the army and fleet US Nuclear Charges, participant in 85 nuclear tests. Among other things, in September 1991, the US Congress dealt a tangible blow to its own nuclear defense industry complex by enacting a law prohibiting the development and production of new types of nuclear weapons, as well as nuclear weapons tests. At the same time, all previous programs for the development and production of new ammunition were closed.

After the tragic events of 11 September 2001, the Bush administration asked the Senate for R & D funds for a nuclear arsenal modernization program. Under the new conditions, the American president linked the future of the country's nuclear arsenal with the gradual replacement of obsolete nuclear charges with promising, highly reliable, more technologically advanced in manufacturing and not requiring nuclear tests for adoption. The development of such munitions in accordance with the Kompleks-2030 program was planned to be entrusted to the Ministry of Energy under the RRW project (Reliable Replacement Warhead - a reliable replacement warhead). But the Bush administration failed to push through this program through the Senate and Congress.

In June, the US National Nuclear Security Administration (NNSA) National Nuclear Security Administration (NNSA) completed an inspection of the technical state of the arsenal of B-2006 bombs, which lasted nearly six years. After that, it was decided to conduct it through the Life Extension Program (LEP), literally - the program for extending the life of the 61-61 series bomb. The latest W-4 charge is involved in LEP, W-61, W-76 and even newer W-78, W-87 devices were previously conducted through this program.

Individual features of the models currently in service

"Model 4". Tactical variable power bombs in four versions - 0,3, 1,5, 10, 45 kilotons. In service with 200 units. Almost all are deployed in Europe at six air bases in five European countries. Another 300 bombs are in storage in the US (active reserve). 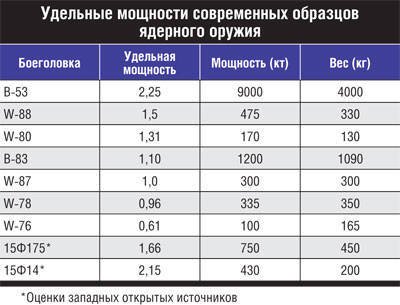 "Model 7". Variable power strategic bomb from 10 to 340 kilotons. A modified version of an older version of the B-61-1. The initiating explosive (BB) in the primary PBX-9404 OH module has been replaced by PBX-9502 IHE, which is more in line with modern fire and explosion safety requirements for nuclear weapons. All available at the end of 1996, have been upgraded to version B-61-11.

"Model 11". Multipurpose bomb of variable power from 10 to 340 kilotons. In service with 50 units (according to other sources - 48). The new modification B-61-11 is essentially an old charger W-61-7, repackaged in a new reinforced needle-shaped housing, the material of which contains depleted uranium (U 238). It began to enter service in January 1997, replacing the B-53. Throughout 1997, the nose of the new weapons were manufactured at the U-12 factory in Oak Ridge (Tennessee), the tail at the factory in Kansas City (Missouri), and then delivered to the NAC (Strategic aviation command) conversion kits and already on the ground, the technical personnel of the air bases converted B-61-7 into B-61-11 Bunker Busters. The free fall air bomb (the carrier is the B-2 bomber) is designed to drop 40 feet (000 meters) from a high altitude. Having no braking parachute, at the moment of collision with the ground it gains speed up to 12 meters per second. Tests have shown that the B-200-610 can penetrate dry medium-density soil to a depth of 61 feet (six meters). The penetration depth is small, but sufficient to ensure that most of the energy (up to 11 percent) released during a nuclear explosion passes into a seismic wave. This energy is enough to destroy any highly protected underground target. B-20-90 bombs are stored at four air bases: Barksdale AFB in Louisiana, Minot AFB in North Dakota, Nellis AFB in Nevada and Kirtland AFB in New Mexico.

Available in the arsenal of the US Air Force 50 units of B-53 were decommissioned into an active reserve, simply speaking, stockpiled. October 13 2010 of the year NNSA announced the launch of the B-53 recycling program, which has been in service with the Air Force for 35 years. The destruction was done at the Pantex plant in Texas. October 25 2011 was disposed of the last copy.

"Model 12". The latest modification is planned to be adopted in the 2018 year.

27 November 2012 The Pentagon signed a contract with Boeing worth 178,6 million dollars to develop the 1 Phase program (R & D only) of a controlled nuclear bombs. The basis for the latest bomb should serve as the B-61-4. New will be only the tail section, equipped with controlled aerodynamic surfaces and guidance system for satellite navigation GPS. KVO (circular probable deviation) of the new weapon should be estimated at less than one meter. Non-nuclear components of the bomb are subject to partial replacement - electronic stuffing, a radar fuze and some other elements, in particular, a security system (separate program “Phase 6.3”). The contract must be implemented by October 2015. The next stage - the contract for the production of "Phase 2", provides for the release of 500 tail kits for the conversion of the entire available stock of B-61-4 to B-61-12. The contract amount is six billion dollars, the term of implementation is three years.

Having spent hundreds of millions of dollars on the restoration of the B-61-7, NNSA now plans to revise its views on the new weapon and replace it with the B-61-12. The Obama administration has announced the priority of the B-61-12 universal bombs program. The B-2 strategic bombers and the F-15E, F-16, F-35 and Tornado tactical fighter-bombers should become carriers of the new weapon. Washington is ready to offer Moscow a new agreement on further reduction of strategic offensive weapons. This was stated by the US President in his annual speech in the 13 congress in February of this year. The reduction, according to calculations of American experts, will be at the first stage to 1000 units, at the second - to 500. The Americans, apparently, are ready to make such a significant reduction in the nuclear arsenal, approaching in absolute terms to the level of the Chinese and French arsenals.

After the landmark visit of Donald Rumsfeld to Moscow and Russia, the long-awaited measures were taken to re-equip strategic nuclear forces with new models. Two new ICBM complexes, the mobile Topol-M and PC-24, have been adopted. Gradually, the RVSN replaces the old complexes with new ones. Similar rearmament measures are also being carried out in the marine component. Our defense as opposed to the US new nuclear warheads to produce no one forbade. If on American carriers there are modernized, but still old warheads, then on Russian carriers of Topol-M, PC-24, Bulava, P-29RMU2 The Liner is brand new. In the Strategic Missile Forces 186, the 1092 warheads are new (17,03 percent). In the 256 naval forces, 400 warheads (64 percent) are new.

14 December 2012, the commander of the Strategic Missile Forces officially announced that Russia is conducting research and development on a new heavy liquid ICBM. The last couple of years, officials periodically carried out stuffing of dosage information in print. From the published information it is known that the rocket - 100-ton class, will be equipped with ten megaton class warheads. Cast weight - from four to five tons. The OKB named after Makeev is working on it. From what remains with us after the collapse of the USSR, this is the most experienced and professional team in the development of liquid ballistic missiles. All their recent works - Р-29РМ "Shtil", Р-29РМУ1 "Sineva", Р-29РМУ 2.1 "Liner" - are very high quality, at the highest technological level.

Since 31 March 1976, a bilateral agreement between the USSR and the USA has banned underground nuclear testing of devices with a capacity of more than 150 kilotons. For this reason, there should be no talk of a new development of warheads for medium-power ICBMs. You can only use what was created earlier. Of course, in a modernized form. Makeevtsev available for the new rocket two existing variants of the MS.

MS of heavy ICBM P-36 М2 "Voevoda". Drop weight - 8800 kilograms. 10 15F175 warheads, 450 kilograms each. The problem part is the huge breeding unit and the platform. The weight of the unit equipped with an RD-869 engine, fueled, together with the warhead platform is 4266 kilograms. Another formidable problem is the big center, 3000 millimeters. The rocket is unlikely to be over 2500 millimeters. In addition, all ten warheads by weight will occupy the entire limit.

MS from RT-23 UTTH, equipped with 10 15 X 14 individual targeting warheads with 430 kilotons each. The breeding unit, both in size and weight, will easily fit into the design of the new ICBM. The most perfect for today. Warheads have the highest power density in comparison with all existing ICBM and SLBM warheads, both here and the Americans.

The new rocket will be equipped with a liquid jet engine (LRE) on low-boiling fuel components: fuel - asymmetric dimethyl hydrazine (UDMH), oxidizer - nitrogen tetroxide (AT), which will significantly reduce the starting weight in comparison with solid-fuel PC-22 (PT-23). The energy perfection of ICBMs and SLBMs is characterized by a specific impulse of the propulsion systems of their stages, developed by a second-rate fuel consumption. Often the anti-scientific term “energy-mass perfection - the value of the weight dropped, referred to the starting weight” is given in the press. The authors unreasonably unite in one criterion two completely unrelated parameters. Apparently, two parameters are meant: the first is the constructive perfection of the PH, the coefficient of constructive perfection is the ratio of the passive mass of the PH to its active mass (fuel), and the second is the energy perfection.

The first parameter directly depends on the level of scientific and technical thought and the state of the industrial base in the country, the second on the type of fuel and engine.

The energy potential of solid fuels is generally lower than that of liquid fuels, but their use simplifies the design of rocket blocks and increases reliability. To increase the specific impulse from average values ​​- 170 – 240 seconds to maximum - 260 – 285 seconds, fine powders of aluminum, magnesium, and beryllium are added to solid fuels. Sometimes explosive is added to fuel in small quantities to accelerate the combustion process, for example, BB HMX in the composition of NEPE 75 fuel ("Trident-2"). The rocket becomes very capricious and sensitive to storage conditions (temperature, humidity).

In the variant of the second stage with the control unit MUV (MIRV), the calculated starting weight will be about 80 tons, in the variant of the third stage with the control unit MECV - and even less, of the order of 65 tons. That is, there are tons more on 13 – 13,5 than on Yars. This is despite the fact that the thrown weight of the new rocket is three times more - 4050 kilograms against 1400 kilograms. With such mass-dimensional parameters, it is quite realistic to create a mobile version - PGRK.