"St. 300 in Damascus will make any aircraft over Israel vulnerable" 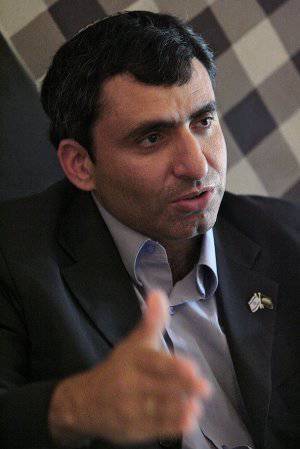 
And about. Israeli Foreign Minister ZEEV ELKIN arrived yesterday in Moscow to discuss the situation in the region and the future of Syria. On the position of Israel on these issues, he told the correspondent of "Kommersant" MARIA "YEFIMOVOY.

- What is the purpose of your visit to Moscow?

- Strategic dialogue on regional issues: the general situation, Iran, Syria, the Palestinian-Israeli process. My visit will be a continuation of the conversation between Vladimir Putin and Benjamin Netanyahu in Sochi, where I attended.

- One of the main topics of the meeting in Sochi was the supply to Syria C-300. Have you brought any new arguments?

- I got the impression that Putin understands the logic of our position well. His recent statement about deliveries (that they have not yet begun. - “Kommersant”) means: our conversation in Sochi was not in vain. From myself I can only add: for your scale it is defensive weaponIn the Middle East, everything is different. C-300 batteries in Damascus will make any aircraft in Israel vulnerable. And given the instability, this weapon can fall into the most different hands.

- After air strikes on military facilities in Syria, many felt that Israel had abandoned neutrality and, in fact, sided with the Syrian opposition. Are you getting into a war?

- Israel is not drawn into the Syrian conflict, but ensures the safety of its citizens. The transfer of new types of weapons to Lebanon is contrary to the decisions of the UN Security Council. There and so tens of thousands of rockets are aimed at Israel, getting Hezbollah their new types for us is a red line. To prevent such a situation should the world community, but it can not cope. And we have to intervene. So any solution to the problem is not excluded, but it has nothing to do with our position regarding the Syrian conflict itself.

- What can you say about the Syrian television message about the supply of Israeli weapons to the opposition?

- Israel is a major arms manufacturer. There it was about small arms, which is uncontrollable. I do not exclude that some fighters in Syria have it, but we don’t supply it there: there are a lot of such on the arms market.

- If the regime changes in Syria, it will deal a serious blow to the influence of Tehran. What will be the balance of power in the Middle East?

- The current alignment is very complex. On the one hand, Iran is a hotbed of radical Islamic ideology, openly supporting terror and developing nuclear weapons. This is a danger not only for the region, but for the entire civilization. On the other hand, radical Islamists associated with al-Qaeda are no less dangerous. In Syria, we are satisfied with any power that will support stability, not terrorism.

- Along the cease-fire line in the Golan Heights is now restless, from there go "blue helmets", and the government forces of Syria no longer protect the border. Is it true that there is a plan to create a buffer zone there, guarded by the soldiers of the Free Syrian Army?

- UN forces in the security zone remain. Consultations are now under way to replace the Austrian contingent, but no major changes are planned. We are interested in continuing the UN mission, and we are not interfering in who protects the other side of the border.

- President Putin proposed the Russian contingent as a substitute for the Austrians. How did Israel react to this?

- Netanyahu and Putin in a telephone conversation at the end of last week discussed this issue. I will refrain from commenting on this topic.

- What do you know about the plan to create in Syria two buffer zones covered from the north by the Patriot air defense system in Turkey and from the south in Jordan?

- I will not go into operational issues. Israel is not involved in the creation of any zones.

- The head of the US Department of State, John Kerry, has recently been frequently in Israel and the Palestinian territories. Any chance of getting the peace process moving forward?

- There are many working ideas, but there is no reaction from the Palestinian side. They do not rush to the negotiating table. Because then you have to not only receive, but give something in return. Kerry is now trying to convince them, they are discussing measures to help the Palestinian economy, but so far all to no avail.

Ctrl Enter
Noticed oshЫbku Highlight text and press. Ctrl + Enter
We are
A great interview with Sergey Lavrov: about Ukraine, Obama and IranInterview by President Bashar Al-Assad to the Sunday Times
Military Reviewin Yandex News
Military Reviewin Google News
59 comments
Information
Dear reader, to leave comments on the publication, you must to register.