American special forces are dying like flies, or where the Boston trail leads 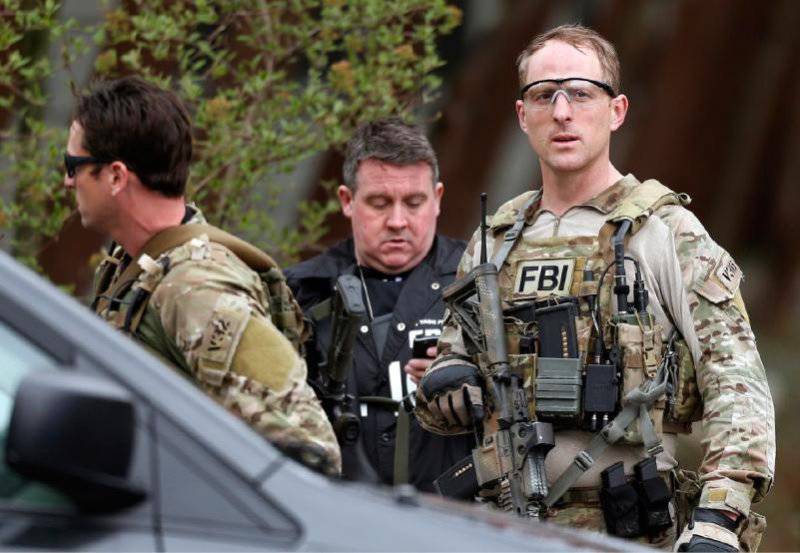 Recently, the Western press reported on the death of two members of a special anti-terrorist unit of the FBI - Christopher Lorek and Stephen Shaw. American alarmists instantly roused a wave of rumors about the murder of these two. By whom? Brutal state machine. Couldn't these cool professionals take a fall out of a helicopter! The media have been mentioned that these guys participated in the detention of the brothers Tsarnaev, sadly famous for the terrorist attack on the Boston marathon. Is it really?

20 May Journalist PilotOnline.com Scott Doggerty gave material about the death of two members of the elite anti-terrorist unit of the FBI. Both fighters died during the exercise, practicing the rapid descent of the rope from the helicopter to the ship. This was announced in a statement to the FBI press.

The bureau has provided scant details about the death of special agents Lorek and Shaw. It was said that the helicopter ran into uncertain difficulties, and the agents collapsed from a "considerable height."

As an anonymous law enforcement source told Pilot, the incident occurred about xNUMX nautical miles off the coast of Virginia Beach. The official version of the tragedy is bad weather. It was clarified that agents - members of the FBI rescue team for the release of hostages, based in Quantico - fell into the water. The official said that, in his opinion, the agents did not drown, but died as a result of the injury.

Glenn McBride, a spokesman for the state medical examiner office, said that determining the ultimate cause and nature of the death of the two agents may take months. You should also wait for the results of toxicological expertise.

Danny Coulson, a former deputy assistant director of the FBI who started working with the 30 team years ago and was her first commander, explained that this is the most trained unit — perhaps not only in the US, but in the world.

"They must fulfill any mission at any time."

Among other things, members of this hostage rescue team are trained to climb a helicopter from a rope, scuba dive and use explosives to knock doors and smash walls. If necessary, the team can turn around within four hours anywhere in the United States.

“It sounds cool, but it’s absolutely true,” notes Mr. Coulson. These guys, he says, "have the same skills as SEAL Team 6 and Delta Force."

Collectively, this team participated in more than 850 incidents involving terrorism, violent crimes and foreign counterintelligence (information from the FBI website).

This team, the journalist writes, took part in the arrest of Dzhokhar Tsarnaev. Earlier in February, fighters from this team rescued an 5-year-old boy, who was held hostage by a criminal for six days in an underground bunker in Alabama.

“Whenever things go really badly, the FBI calls the hostage rescue team. This is the 911 government, ”said Coulson.

Coulson also stressed that the team members are not just some kind of dull force. It takes a lot more to become a member of the hostage rescue team. “It's not just biceps and triceps. It requires intellectual muscles, ”he explained. About the death of Lorek and Shaw, whom he considered "the most prepared people in the world," Coulson said sadly: "This is a national loss."

The article speaks of a “accidental fall from a helicopter during an exercise”, which was confirmed by the state medical examination office. The cause of death of special agents Christopher Lorek and Stephen Shaw were "blunt injuries caused by the fall." So says Rob Robinson, a leading expert. A fall is classified as an accident.

It turns out that we add from our own that both special agents died, falling from a very great height and hitting the water.

The journalist once again reminds that the special team took part in the arrest of Dzhokhar Tsarnaev. However, in order to correct some erroneous media reports, Special Agent Ann Todd, the FBI spokeswoman in Washington, said that Lorek and Shaw did not directly participate in the detention of Tsarnaev. They were not even in Watertown, Massachusetts, during the arrest of the suspect.

Портал fbii.org (not to be confused with the FBI), referring to the Daily Mail newspaper, writes about the death of employees of the elite special forces of the FBI as strange.

3’s June 2013 report states that Christopher Lorek and Stephen Shaw, professionals “with a capital letter,” in April “took an active part in detaining the Tsarnaev brothers suspected of organizing Boston bombings.” But later, during the exercise, both federal agents suddenly broke to death.

The media compared this tragedy with the deaths of thirty “sea lions” who once liquidated Osama bin Laden. Shortly after the death of "terrorist number XXUMX", the Taliban shot down an American helicopter, in which almost all the participants in the operation found themselves. The lead of the Islamists was given, in fact, by Barack Obama: he publicly called the unit and praised the servicemen. Before, neither the names nor the data about the units that performed such “black” work were not disclosed.

Journalists had another parallel with the recent death of US Air Force former captain Philip Marshall, who published a number of books in which he argued that the September 12 11 twin explosions were organized by the Bush administration in collusion with Saudi Arabian secret services.

"To drive heavy commercial airliners, the hijackers were drafted for 18 months in California, Florida and Arizona," wrote Marshall. The writer and his children were found dead in their own home in February of this year. Authorities presented the case as a domestic murder, followed by suicide.

Then the journalists made historical excursion. According to their assumptions, the victims of the American special services were Marilyn Monroe and Martin Luther King. And the assassination of John F. Kennedy was also organized by Washington reactionary circles, infuriated by both the peaceful outcome of the Caribbean crisis and Kennedy’s decision to withdraw troops from Vietnam.

And here, for example, that writes domestic "Beep": “The FBI agents who eliminated Tamerlan Tsarnaev began to die: Christopher Lorek and Stephen Shaw crashed, falling from several hundred meters ... The accident occurred during the exercises, which American intelligence services carried out 12 nautical miles from the coast of Virginia ... bureaus of investigations report that both specialists accidentally fell out of a helicopter while working on a complex maneuver. ”

Or here is the title of a note by Igor Subbotin ("Moscow Komsomol"): "Two FBI officers who were hunting the Tsarnaevs crashed under strange circumstances."

"Vesti", referring to ITAR-TASS, object to alarmists: “FBI special agents from the helicopter 41-year-old Christopher Lorek and 40-year-old Stephen Shaw were not involved in the special operation to neutralize the Tsarnaev brothers, who organized the attacks on the Boston marathon. According to the American authorities, on that day, April 19, they were not even in the city. ”

Recall, the same is written by the American Scott Doggerty, who transmitted a statement from the FBI spokesman in Washington that Lorek and Shaw not only did not directly participate in the detention of Tsarnaev, but were not even in Watertown during the operation.

Observed and translated by Oleg Chuvakin
- especially for topwar.ru
Ctrl Enter
Noticed oshЫbku Highlight text and press. Ctrl + Enter
We are
Situational analysis of the death of the MH17 flight (Malaysian Boeing 777), made on the basis of engineering analysis from 15.08.2014Active phase of Sea Breeze 2013 exercises completed
101 comment
Information
Dear reader, to leave comments on the publication, you must to register.