13 2013 June
14
From the conversation between John McCain and Condoleezza Rice:


- John, this is unheard of! Russian on their site "Military Review" conduct a survey of public opinion! Without our sanction and control!
- A clear violation of human rights, an attempt on the freedom of personal opinion! Need to connect the Hague court!
- Yes, I do not care about the rights of Russian from this site! The thing is different - this is a recurrence of their eternal predilection for collective work and joint decision-making! And this is Russian "weapon"Much more dangerous than their" yadren-loaf "!
- Condoleezza, do not take in your African-American head! The time is working for us - the Russians are swinging for a long time, and the time of the survey is inexorably expiring ...
- John, Russians, you see, your brains in Vietnam beat off your brains! You forgot that they harness a long time, but they drive fast! 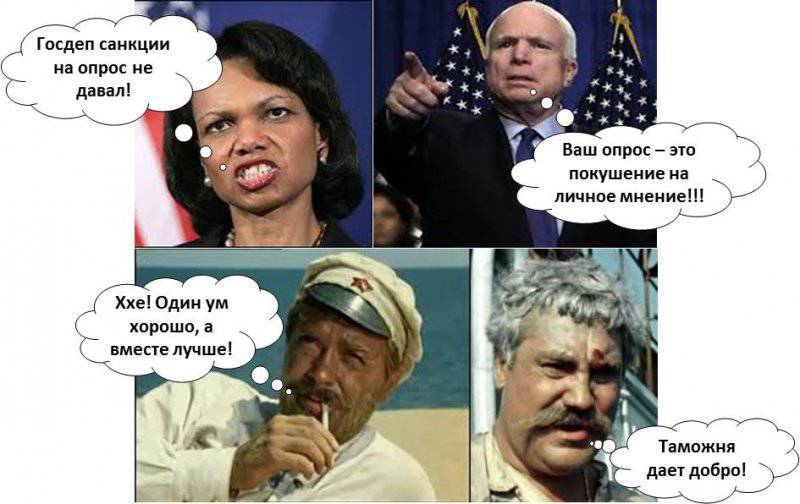 5 June 2013 started on our website annual survey "Evaluation of state political figures». Currently, the first, field stage survey is approaching its equator. On the mailbox [email protected]through which the dispatch and return of the completed questionnaires goes, it becomes hot — there is an intensive exchange of messages and files between the organizer of the survey and its participants:

- Ready to participate in the survey, send the form!
- Dear survey participant, send the evaluation file, give confirmation of its receipt!
- File received, thanks! Start filling out.
- Strictly adhere to the instructions when filling out the questionnaire. Creative success!
- Forward the completed file. A very useful survey, not in the eyebrow, but in the eye!
- Levada Center will never dare to do this!
- Your file has been received, the results are recorded in a common database. Thanks again for taking the survey!

This is the second survey on a given topic. The first was held about a year ago, in April-May, 2012, and coincided with a landmark event for Russia - the inauguration of the now three-time Russian President Vladimir Putin.

Purpose of the survey - to form a generalized view of the leaders of modern Russia, Ukraine, Belarus and Kazakhstan in comparison with the leaders of the Soviet era. Accordingly, the defendants in the survey (objects of evaluation) are: Joseph Stalin, Nikita Khrushchev, Leonid Brezhnev, Mikhail Gorbachev, Boris Yeltsin, Vladimir Putin, Dmitry Medvedev, Viktor Yanukovych, Alexander Lukashenko and Nursultan Nazarbayev. Note that compared to last year, the list of respondents to the survey is significantly reduced. This made it possible to significantly simplify the evaluation procedure and, at the same time, enrich its content with new items.

The basis of the survey, the method of multidimensional evaluation, has remained unchanged. It allows you to evaluate the defendants in the three factors-criteria: "Strength / Activity", "Moral" и "Competence". Last year, for example, Vladimir Putin, against the background of election promises, received the following estimates:

I wonder how Putin’s grades will change after a year’s presidency?

What is new about the survey participants-2013? First of all, this is the question of According to the respondents, whose interests are (or were at one time) those involved in the survey. To answer this question there are five possible answers:
1) State Interests
2) People's Interests
3) Interests of elite-clan groups within the country
4) Personal Interests
5) The interests of external, alien to the country forces

The following two new items introduced by the proposals of the survey participants themselves. It is about intra-and interstate relations between our countries. Within this topic there are two questions.

“What type of society, in your opinion, is actually formed in Russia, Ukraine, Belarus and Kazakhstan under the leadership of the leaders of these countries?” Here are the following response options:
1) State Socialism Society
2) Society of the early "wild" capitalism
3) Society for Advanced Market Relations
4) Society of domination of elite clan groups
5) Society of the cult of the individual
6) Something else (free answer)

“What, in your opinion, are the main motives of the integration processes within the Eurasian Union?” Possible answer options:
1) Mutually beneficial cooperation between independent member states
2) The revival of a centralized empire state
3) Satisfaction of interests of elite-clan groups of one of the participating countries
4) Something else (free answer)

Thus, in its substantive part, the survey goes to a higher quality level. Accordingly, an analysis of the results, on the basis of all the questions raised, can provide richer food for thought ...

Some visitors to the site may argue - why make a garden, conduct a survey and find out a generalized opinion? Who needs it, this generalized opinion? I have my personal opinion and I am not going to refuse it! What is there to argue? You can, of course, remember the old army joke - if you are so smart, then why don't you go? But, most likely, only military people will understand its deep meaning. As they say, there is a joke in every joke ... For civilians, of whom there are many on our website, another proverb is more suitable - alone it is only good to woo the girl, everything else is better to do together. And this is right, this is in our folk tradition that has been going on from time immemorial.

This is how we differ from the Western tradition, which sets the priority of the individual over the public.
However, everyone is left with the freedom of choice - either to become a participant in the survey, the creator of collective co-knowledge, or continue to stew in the juice of a personal opinion, slurp a stew cooked according to Western recipes ...

To participate in the survey, you must submit an application in any form to the email address [email protected] In a reply message, survey participants receive an Excel questionnaire file, which must be returned in the completed form. until 20 June 2013.

Welcome to the project, mailbox [email protected] waiting for your applications!

Stanislav Vasilenko, nickname “just Vasilich”
Ctrl Enter
Noticed oshЫbku Highlight text and press. Ctrl + Enter
We are
Results of the week. "Go on a horse, a century of will not be seen!"Preliminary evaluation of the prototype of the unobtrusive Chinese fighter Chengdu J-XX [J-20]
14 comments
Information
Dear reader, to leave comments on the publication, you must to register.