13 2013 June
8
In the world of handgun weapon it is far from always possible to understand from where the “legs” of one or another type of weapon “grow”. The merger of companies, the separation of large representative offices from large firms with already different names and their joint work with other companies confuses traces very well. What is most interesting is that even the name of a weapon does not always mean that it belongs to a particular weapons company. A striking example of this can be the SIG 50 large-caliber sniper rifle, which appeared relatively recently, but has already managed to establish itself as a weapon that is accurate enough for its class and reliable. It is with this model that we will try to get acquainted in this article, and at the same time we estimate how much this Swiss weapon is.

This rifle appeared due to the rather large demand for large-caliber sniper rifles, which has been kept stable since the end of the 80-s of the last century. However, during this time, the demand for weapons, although remained unchanged, but the requirements for such rifles have increased significantly. If earlier, the CWS could be close to the PTR by its accuracy, and far from being the best, now the large-caliber sniper rifle is beginning to become a high-precision weapon capable of hitting the enemy at considerable distances, of course, if a sniper with the appropriate training is attached to the weapon. Thus, many companies could afford to do production of CWS earlier. Now, with sufficiently high requirements for weapons, the production of large-caliber sniper rifles is quite expensive, and it is not known whether the weapon will pay for itself, because besides the weapon you need to make, you still need somehow sell, and here without additional costs can not do. Thus, not every enterprise can afford the purchase of rather expensive equipment and materials for production and even fewer small arms companies can afford full advertising of their weapons. However, if everything runs smoothly, then success will be and the weapon will pay for itself many times. It is the potential profit from the creation of new accurate large-caliber rifles that makes many companies unite or divide the work on design and production among themselves, although the profit also has to be shared later.

So a division of the Swiss company Swiss Arms AG, located in the United States, SIGARMS at the beginning of 2011, introduced a new sniper rifle SIG 50. I think it would not be superfluous to remind you that in 2000, this company stopped having something in common with Schweizerische Industrie Gesellschaft, but history we will leave the departments for another material, just to take into account that now it is almost an independent arms company, part of the SIG SAUER concern. In other words, the company is "spinning" already for its money and is moving forward thanks to its ideas. In this case, as it turned out, the idea was only to create a weapon, and the money was completely spent at least. Without delaying, I will immediately say that almost everything in the sniper rifle was made by the hands of the designers of McMillan, moreover, the weapons are even made in the factories of this company. SIGARMS gave only an idea, made a clear assignment for a weapon, lent their name, and now they are only engaged in selling and servicing weapons. This is how people work now, it turns out.

Knowing who developed and manufactures weapons, it becomes clear why the rifle seems familiar, because in fact it is a reworked McMillan TAC-50. The weapon has a longitudinally sliding bolt locking the bore when turning on two lugs. The surface of the shutter has sloping valleys, the task of which is to facilitate the progress of the shutter when contaminated with dirt, sand and other things. The trigger mechanism of the weapon is adjustable along the trigger, as well as the pressing force. The rifle butt is folding, fixed by a clutch, which eliminates any backlash, even for weapons with a long track record. Butt has the ability to adjust its length, has a height adjustable stop for the cheek. The barrels of weapons are free-hanging to increase the rigidity of the barrel, reduce its weight and better cooling, it has longitudinal fits. In front of the forearm fasten folding, height-adjustable bipod. 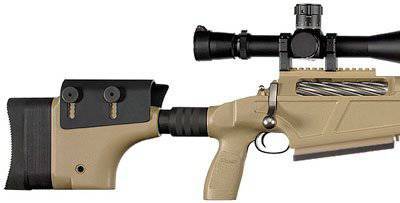 The rifle length with a barrel length of 737 millimeters is equal to 1448 millimeters. The weight for this class of weapons is small, only 10,7 kilograms. It feeds weapons from detachable single-row box-type magazines with a capacity of 5 cartridges. Accuracy for a series of ten shots at a distance of 2000 meters equals one angular minute, however, it all depends on the ammunition used.

In other words, the weapon came out as simple as possible, with good characteristics and quite viable. The only drawback of this rifle is that there is only a Swiss name in it, and no matter how cool one even such deception is unpleasant. But from whom, and from them, I did not expect this.