Ryazan is preparing the first issue of female officers

13 2013 June
135
The first graduation of female officers is being prepared at the Ryazan Higher Airborne Command School (RVVDKU). In the corridors and auditoriums of this one of the most famous military universities in the country today you can hear the ringing voices of girls. This is all the more surprising because not all men are able to complete training here. And who will argue with the fact that being a paratrooper officer is not an easy and very often dangerous business. For the first time, female soldiers appeared in the statements of the legendary school exactly 5 years ago. In 2013, there will be the first release of female lieutenants, who will wear berets and camouflage suits instead of heels and fashionable summer dresses, and instead of powder and lipstick in handbags, they carry field commander bags with cards and backpacks behind them.


RVVDKU is one of the oldest educational institutions of the Ministry of Defense of Russia. Its full name is Ryazan Higher Airborne twice Red Banner Command School (Military Institute) named after Army General V. F. Margelov. The school leads its history since November 13, 1918, when the first Ryazan infantry courses were formed in Ryazan. Since then, tens of thousands of personnel have been trained in our school for our army.

23 June 2013 of the year at 11: 00 at the school will be held 132-th in a row graduation of young officers who received in the walls of the institution of higher education. During its work, the school has managed to prepare and educate a whole galaxy of honored commanders, as well as prominent public and state leaders. Within the walls of the school, more than 48 thousands of officers were trained for the Airborne Forces and other branches of the armed forces of our country. Among the graduates of the school are 53 Hero of the Soviet Union and 74 Hero of the Russian Federation. The school enjoys a well-deserved popularity abroad, every year there are numerous foreign students. 11 June 2013 of the year at the school for the training of signalmen and marines was observed by military attaches of 80 countries of the world. Military diplomats in fact became acquainted with the methods of teaching in the school of special and general disciplines, simulators of the airborne complex and the objects of the educational and methodological base. For quite some time now the school was engaged in training and female officers. 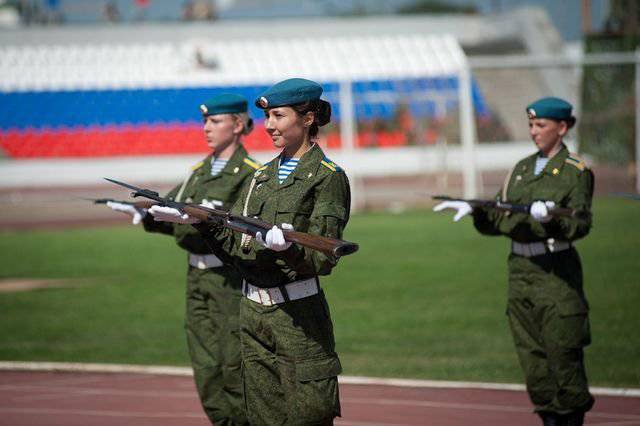 Today, the University is the only university in our country that trains female officers. To call them experimental cadets does not turn the language, to call them pretty ladies - does not allow the army charter. Their military life is not much different from the life in the barracks of ordinary men. Is that the presence of dressing tables and plush toys. With them, the girls' rooms look somehow cozier.

Classes on the organization of internal regulations for personnel are held in the usual barracks for male cadets. After completing their studies at the school, the girls will have to serve as platoon commanders. At the same time, the teachers of the school do a number of loosening of female cadets — perhaps, not so strictly assess their knowledge of the statute, not loudly give commands. Already by the 3-th course on the account of the student was a dozen jumps, spent movements on the tactic of removing the sentry, sergeant marks on the shoulder straps.

Future female officers will be commanders of airborne platoons and other units. They learned to control combat vehicles and personnel, made parachute jumps, and also learned to survive in inhumanly difficult conditions and perform complex combat missions. At the same time, not all girls were able to reach the final examinations - out of two dozen student girls, only 14 people could get to graduation. Some of the girls left the walls of the school for health reasons, someone got married, believing that they could bring more benefits by doing family matters. 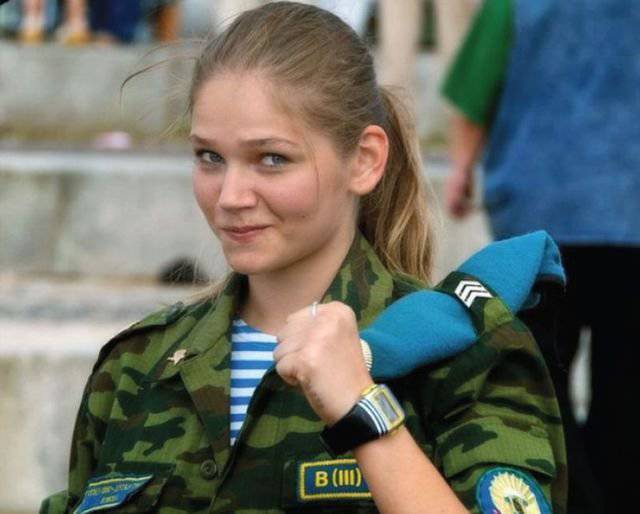 All graduates who graduate from college this year will receive the specialty of a platoon commander of parachute handlers. For this reason, the conduct of hostilities will not be their profile. Representatives of the beautiful half of humanity have successfully mastered the specialty "The use of landing support units." Graduates of the Ryazan Airborne School will command the units of the parachute handlers, as well as help drop paratroopers and equipment, including with the use of special complex multi-dome systems, as well as airborne platforms.

The new issue of the Ryazan Airborne School has proved to the whole world that the commander’s voice may well be girlish and sonorous. Instead of pens and notebooks, automatic machines and grenades, instead of a desk, a trench. The girls took part in the most real field exercises, the purpose of which was to surround and destroy the enemy. It would seem that the most ordinary exercises, only the offensive is led by students of the Ryazan Airborne School. The girls who have gone through this real school of courage are left to take the final step - to pass the final examinations, after which they will have real epaulets of a Russian officer on their shoulders.

At present, coquettish bangs from under their caps in camouflage in Ryazan have already become accustomed. As the girls themselves are accustomed to wear backpacks behind their backs instead of the usual handbags. According to Irina Titorova, who is a cadet of the Ryazan Higher Military Airborne Command School, the girls had to act as a company commander, personally giving orders to fire weapons and combat vehicles to destroy the enemy. Looking at how the targets brought down by girls fall one after another, you understand that these students will not only stop their horse, but even any enemy will be able to fight back, even if it comes to melee combat.

Although university professors say that the cadets, like all other military men, are not divided into the weaker and stronger sex, but they immediately stipulate that command is not exactly a woman’s business. Vyacheslav Rakov, a teacher at the Department of Armaments and Shooting of the Military High School of Military Management, believes that, after all, military service is more relevant to the male path than to the female one. At the same time on the sidelines, directly in the role of officers of the airborne service, women will be at the proper height and in good standing with the authorities.

Confidently holding onto the lines of their own parachutes, future paratrooper girls, who have more than a dozen independent parachute jumps behind their shoulders, are well aware of what sky is and what heights they would like to achieve in life. Maria Maltseva, a cadet of the Ryazan Higher Military Airborne Command School, notes that a soldier who would not dream of becoming a general is bad. Graduates of the Ryazan University have all the chances to fulfill this dream. Maria believes that some of the graduates will be able to achieve this high rank.

All the girls are looking forward to the moment when real lieutenant stars will appear on their women's shoulders. The obstacle course is the last step to the diploma, while over the years spent at 5, they have become well known to these labyrinths and walls. Already after passing the exam, they will be able to slightly make up their lips and slightly draw their eyes. After all, even in such a harsh male profession you can always find a place for small female weaknesses.