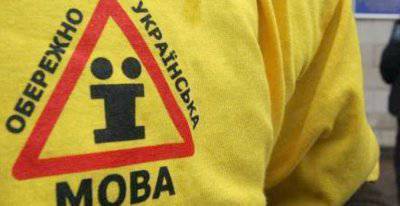 When I travel to the City, I see normal Russian people there. Several relaxed and carefree, as in any other provincial city of southern Russia. Most often in the city sounds Russian speech. It is true that Ukrainian-speaking citizens sometimes come across in a noisy urban crowd, but they look ridiculous, like tourists. They are as ridiculous as Kiev - the mother of Russian cities, which today is the capital of Ukraine. Strange City, Free City, where intertwined история and fiction, true and false. However, most citizens do not care about everything except their personal problems. For them, Petliura is a street. Grushevsky is a monument. Mazepa is ten hryvnia. Power is evil. It is not clear how to tie all this together, to understand where the reason lies, and what is the consequence of Ukrainian problems ...


Kiev did not manage to eliminate provinciality from itself, despite its metropolitan status. However, Ukraine has not become a full-fledged state. There are attributes, but no state. Although in order to agree with this, you need to know that there is a sovereign state.


In Ukraine, everything is somehow not serious, amusing, childishly naive. It seems that adults have left this territory, giving children the opportunity to realize their fantasies. Nesmyshlёnyshy, forgetting everything, declared to themselves indefinite holidays, converted the parental inheritance into sweets and feasting. "In Busa veritas" - "Truth in Buza". When the adults return, I do not know, but the fact that Ukraine has come to the end of its history is undoubtedly.

However, about the end of the story, I got a little excited. Ukraine can exist indefinitely, if it is the mercy of external forces. Crisis, default, hunger, cold - all this can happen, but there is nowhere to run? This is how Ukraine will survive, as an African country torn apart by internal contradictions, from which citizens flee to Europe to get caught and deported back there.

Ten years ago, when compassionate media published information that people somewhere in Africa live on one dollar a day, I wondered how you could live on just one dollar, if you lack fifty. Then I began to understand, more precisely, to get used to the fact that you can live on one dollar a day. You just tighten the belt, first giving up the excess, then the necessary - and you live ... The main thing is that there is some explanation for your plight, and there is at least some kind of future ahead. With hope you can suffer. With such patience, Ukraine lives in expectation tomorrow, reducing its needs from year to year and finding justification for poverty.

Just think, over the years of independence, Ukraine without wars and "famines" has lost about seven million people! Even more than five million people seek happiness beyond its borders and will never return home of their free will. They are refugees from a state that has destroyed itself without war. Homeland is not waiting for them. Homeland they are not needed. And to love Ukraine is best to be far away from it, hoping that sooner or later, everything will be fine by itself and without any personal participation.

If for a moment we forget that the Ukrainians are ruled by the elected authorities themselves, then it is quite appropriate to talk about genocide. However, how can you accuse Ukrainians of a crime against the Ukrainians themselves? After all, what is the focus: there were still no principled decisions of the government in Ukraine that the people would not support. It later turned out that all these decisions led to a deterioration of the financial and economic situation in the country, but before that they were supported? Who is to blame? Against whom rebel and fight? Against manipulators from among the deputies, analysts, economists, journalists? Against the legitimate authorities of Kravchuk, Kuchma, Yushchenko or Yanukovych? Against all Ukrainian to the brain and bones of governments, regional, district and rural administrations? After all, exactly the same Kravchuk, Kuchma, Yushchenko and Yanukovich, who have not yet reached the main seats of their life, are sitting everywhere. They will grow, seize power and continue the work of their predecessors to destroy the state and its people. And this very population will also support them, because they have got used to mindlessly listening to primitive demagogy. Who is more guilty: the one who shamelessly lies, or the one who believes a liar, knowing that before him is a liar? It is nonsense that in Ukraine there are no people who do not understand what is happening, and where the country is heading, only to speak the whole truth is unprofitable. This will erase the future of any politician. If Ukraine had a big coat of arms, then it would have to write a motto on it: "We believe in lies, because we are afraid to admit the truth." All Ukraine, from its past to the present, is a big lie.

In Ukraine, everything is very similar to what the Nazis were doing in Europe during the Second World War, driving Jews to the ghetto for subsequent extermination. It was not the German administration that was responsible for the order in the ghetto, but the so-called Judenrat — the Jewish Rada. The powers of Judenrat of the times of the Third Reich included the maintenance of economic life, the collection of money and other contributions, the selection of candidates for work in labor camps and control over the execution of occupational power orders. Judenrat formally submitted to the Jewish police. The worst thing is that in the ghetto, the order was maintained by servants from “their own”, seeking to show their zeal to their owners, to save their lives and eat a little better than all other prisoners of the ghetto. Replace the Judenrats with Ukrainian Rada of all levels, and the occupying power of bureaucrats from the European Union, bankers from the IMF, and everything will converge.

Previously, it was difficult for me to understand why, in the absence of total Russophobia in Ukrainian society, the demand for Russophobic forces does exist. Why is the historical heresy in Ukraine so popular, and even Russians believe in it? Then I realized what was the matter ... The idea of ​​Ukrainians being chosen allows the most insignificant man to feel great and sinless. In Ukraine, someone else is always and everywhere to blame: either bloody tsarism, or Bolshevism, with its repression, collectivization, and hunger. Recently, Kuchmism was to blame, but never is “I am a man”, a component of this system. I repeat once again, accepting Ukrainians is very convenient, because in this case Muscovites served, they killed Muscovites with hunger, they prevented Muscovites from entering the Institute, made a discovery, made a brilliant film or wrote a book - Muscovites are to blame. And the Ukrainians are the people of sacrifice. It is easy to recognize anyone and anything vile, insignificant and terrible, but it is very difficult to admit oneself as such. To do this, you must have the courage to look at yourself from the outside, repent for your sins and recognize your least bit of responsibility for the past and the present.

At the end of the 80 of the twentieth century, many Ukrainians dreamed of how rich and happy they would become if they lived in a separate independent state. Everything had to appear in Ukraine: a new economy, a new art and culture, in the end - a new man, and not a despicable "scoop". But nothing appeared. And the bright future is moving away with Hetman Polubotka’s earlier investments, Mazepa’s gold, Viktor Yushchenko’s silicon valley, energy all independence of presidents taken together from Russia. How many silly fantasies were born in Ukraine in such a short period! There is nothing for the Ukrainians to be proud of, there is nothing of their own ... Therefore, the captivating star of European integration shone on the dark Ukrainian horizon of the future. If we ourselves were not capable of anything, then we can be proud of the achievements of European civilization, declaring ourselves part of it. Only trouble, Europe does not consider Ukrainians to be Europeans. The question is not geography, but the belonging of Ukrainians to the Russian Orthodox civilization, which cannot be changed by voting in elections and corrected in the questionnaires. You can renounce your Russianness, call yourself even a German, even a Japanese, but you can’t stop being a Russian.

Not everyone will agree that Ukraine is a ghetto, but the fact that something terrible is happening to Ukraine will be absolutely agreed upon. Even nationalists talk about the collapse of the Ukrainian project, they see only its causes in the current government, again in Muscovites, and not imposed by external control. And while the Ukrainians do not understand this, then this very external manager will change the power in Ukraine, sending predecessors to the expense. These are the rules of life in the ghetto ... There are no major ones here, there are first and last ...

Ctrl Enter
Noticed oshЫbku Highlight text and press. Ctrl + Enter
We are
About Stalin and KhrushchevWhat you didn't want to know about England
333 comments
Information
Dear reader, to leave comments on the publication, you must to register.