In form - the army, but in fact - a caricature

12 2013 June
67
The peculiarities of the local mentality make official Tbilisi almost insurmountable difficulties in the construction of combat-ready armed forces.


In No. 34 for 2010, the weekly MIC weekly gave a fairly complete description of the Georgian armed forces. Despite significant budgetary injections, foreign aid, the combat capability of the national army is in doubt. The desire to shed blood for one’s homeland, to fight on the battlefield to the death cannot be bought on the market, these qualities have been brought up in nations for centuries. That is why the return of Abkhazia and South Ossetia by military means Tbilisi will not succeed. We offer our readers a modern assessment of the military potential of the republic.

President Mikhail Saakashvili, whose term in power ends in October 2013 of the year, in January at the Academy of Defense in Gori, demonstrating a slingshot, said that she was a symbol of equipping the Georgian armed forces to 2004 of the year. According to him, today, on the contrary, the army has all the components of weapons - air and ground defense systems, armored vehicles and, most importantly, a joint program with the US for supplying the national armed forces with modern Western technology. The new government of Bidzina Ivanishvili also does not refuse to increase military spending.

In modern Georgia, it is considered that the national armed forces history from the army of the Georgian Democratic Republic, proclaimed 26 May 1918. Her successor is the current Georgian state. The army of the republic began with the People's Guard of Georgia, created in the spring of 1917, as a militia from the Georgian troops of the Caucasian Front and the 2 of the Georgian division formed on its basis. 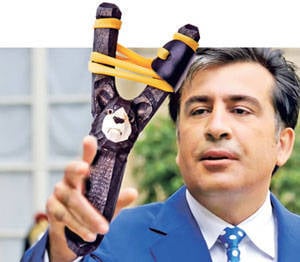 In April, the regular Georgian troops, supported by the police and partisans, stopped the advance of the Turkish forces along the Choloki River. In 1918 – 1918, the army conducted military operations against the troops of the Republic of Armenia and against the Bolshevik detachments in Abkhazia. In the summer of 1919, they occupied Tuapse and Sochi, but were knocked out from there, first by the Soviet, and then by the troops of General Denikin. 1918 May 7 in Moscow signed a peace treaty between the RSFSR and Georgia. The latter was recognized as an independent de jure with the inclusion in its structure of the Tiflis, Kutaisi, Batumi provinces with all their counties and counties, as well as the Zakatal and Sukhum districts and part of the Black Sea province (south of the Psou River). Soviet Russia pledged not to interfere in the internal affairs of Georgia. When the Soviet 1920 Army invaded Georgia in February 11, the Georgian forces resisted stubbornly, but were forced to surrender under the pressure of the superior forces of March 1921.

The history of the army of modern Georgia actually begins on December 20 1990, when the National Guard (NG) was created, headed by Tengiz Kitovani (according to one of the first decrees of Zviad Gamsakhurdia, who headed the Georgian SSR 14 on November 1990). The army in 1991 – 1993 participated in the civil war against supporters of Zviad Gamsakhurdia, as well as in wars with South Ossetia and Abkhazia. In the country, 274 is now thousands of refugees from these republics.

The army is recruited at the call and at the expense of volunteers. The term of service on conscription - 15 months. The draft age is from 18 to 34 years. About three-quarters of the personnel are contract servicemen. The number of males between the ages 16 and 49 in 2010 was estimated to be 1081 in a thousand people, of which 893 were considered fit for military service. Every year, thousands of men reach 29,7 military age. Due to delays in the payment of salaries, unrest has repeatedly occurred in the Georgian army. In April, 2012 was announced to re-create the system of units of reservists, the total number of which by 2012 was 70 thousand people and should be increased to 150 thousand in the future.

The commander in chief is the president. The operational control of troops is carried out by the Chief of the Joint Staff, and the Minister of Defense is engaged in financing and supplying the army. The military doctrine of Georgia’s National Military Strategy, adopted in 2005, considers Russian military bases in Abkhazia and South Ossetia to be a security threat, as well as the existence of these unrecognized republics, as well as instability in the Russian North Caucasus. It is particularly emphasized that the military strategy of Georgia is entirely aimed at "the achievement by the Georgian national armed forces of full compatibility with NATO standards." Joining the alliance is Georgia’s main foreign policy goal in terms of security, and NATO countries are considered allies. At the same time, the country's leadership recognizes the impossibility of resolving conflicts with Abkhazia and South Ossetia by military means.

Military spending is estimated at 1,9 percent of GDP. In the 2012 year - 300,2 million dollars at the official exchange rate and 503,9 million dollars at purchasing power parity. In January, a Charter on Strategic Partnership was signed between Georgia and the United States by 2009, in accordance with which the latter committed themselves to modernizing the Georgian army and increasing the level of the country's defense.

Aviation (one aviation and one helicopter base) and air defense organizationally are part of the SV. The number of Air Force - 1310 people, including 290 draftees. Armament: three Su-25 attack aircraft, seven Su-25K, two Su-25UB, six transport An-2, two Yak-40, one Tu-134A (VIP) and nine training L-39s, as well as 29 transport helicopters Mi-17ST and 12 Bell 205 Iroquois. Repair of aircraft is made at the Tbilisi Aviation Plant. Georgian planes and helicopters did not participate in the 2008 war.

The air defense forces consist of two divisions of the 9K37 “Buk-1М” air defense system, eight 9K33 “Osa-AK” (two batteries), ten 9K33 “Osa-AKM” and several “Strela-9” air defense missile systems (35K10). There are four stations of electronic intelligence "Kolchuga". Georgia has a number of Israeli-made Elbit Hermes 450 and Skylark UAVs. According to foreign experts, the anti-tank defense of the Georgian army turned out to be weak during the “five-day war” with Russia in August of 2008, while the air defense forces showed themselves much better.

Georgian officers are trained in the United States, Turkey and other NATO countries, as well as at the David Agmashenebeli Academy of National Defense of Georgia in Gori. One Academy course has 150 people. The army is trained by instructors from NATO countries, mainly from the USA and Turkey.

Guard and other formations

In NG are the so-called active reservists who are regularly called up for military training. They are united in 1-th light infantry (motorized) brigade.

Coast Guard - as part of the border guards. 17 patrol vessels are armed with her, including one Kaan patrol ship, seven Beetle patrol boats (three supplied by Ukraine), two Point-type boats of American construction, two Greek-style Dilos boats, two Dauntless boats of American construction , one boat "Ahmeta". Another about 20 patrol boats are under repair at the shipyards of Batumi and Poti. There is one landing self-propelled barge "Otter" of Bulgarian construction and one supply vessel. The main naval base is Poti, the second naval base is Batumi.

As part of the International Security Assistance Force in Afghanistan (ISAF) - one Georgian infantry battalion of 937 men. Due to the constant rotation of a significant part of the military gains combat experience. In addition, one military observer is in the OSCE mission and five in Kosovo.

There are two Russian motorized rifle brigades with a total of 6900 people on the territory of the unrecognized republics uncontrolled by Georgia. In Abkhazia, Russian troops are based in Gudauta, and in South Ossetia - in Java and Tskhinval.

There are no official data on the composition and armament of the armies of Abkhazia and South Ossetia. They are formed on the basis of universal military service. According to some estimates, the number of the Abkhaz army is about five thousand people. About five thousand more are in the troops of the Ministry of Internal Affairs, security services, border guards and customs. The troops of Abkhazia comprise several motorized rifle regiments, a reconnaissance battalion, an artillery regiment, air defense units, two or three anti-tank missile battalions, and several special task forces. There are several dozen T-55 and T-72, BMP-1 and BMP-2, BTR-70 and BTR-80 tanks, as well as several BRDM-2 and BMD-1, MLRS BM-21 Grad, self-propelled and towed artillery. There are several Mi-17, Mi-8 and Mi-24P helicopters. The commander in chief is the President of Abkhazia, the operational command of the troops is carried out by the Chief of General Staff, and the Ministry of Defense is in charge of supply issues.

The army of South Ossetia does not exceed 1250 people. Another 890 person listed as part of the border service. The troops of South Ossetia have a certain amount of artillery and armored vehicles.

In the South Caucasus region, Georgian troops are inferior in number to the armies of Azerbaijan and Armenia, and in terms of the availability of weapons and military equipment to Azerbaijan. However, both of these countries are not considered by Georgia as potential adversaries. Georgian troops outnumber Abkhazia and South Ossetia in numbers and weapons, but the military conflict with them without the participation of Russian troops seems absolutely incredible, and as the experience of the five-day war 2008 shows, Georgian troops are not able to withstand the Russian forces for a long time.

Ctrl Enter
Noticed oshЫbku Highlight text and press. Ctrl + Enter
We are
Nikolay Silaev, Andrei Sushentsov: Georgia after the elections and prospects for Russian-Georgian relations"Russia must intervene in the events taking place in Georgia"
Military Reviewin Yandex News
Military Reviewin Google News
67 comments
Information
Dear reader, to leave comments on the publication, you must to register.