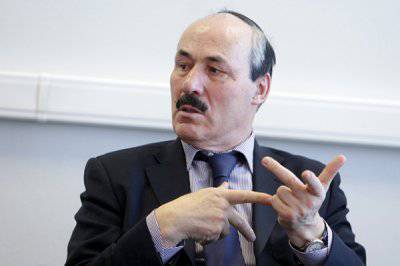 For the first time ever history The existence of the Republic of Dagestan within the Russian Federation (since the collapse of the USSR), the head of this republic declares that the region is fed from the hands of the Ryazan peasant. The person who, for the first time in the last 20 years, has called things by his own name, essentially declaring that Dagestan was really addicted to subsidies from the federal center, that is, other Russian taxpayers' money, was Ramazan Abdulatipov, the acting head of the Republic of Dagestan.


All the post-Soviet times, the Dagestan authorities literally were silent about the expressed problem, fearing to disturb the flow of material resources that was stretching from Moscow to the republic. After all, if one of the presidents announced that feeding from the hands of an outside taxpayer without making their own efforts to earn money honestly is a shame for a self-respecting resident of Dagestan, the federal center could also reconsider its policy of subsidizing the Dagestan economy. Who would be the first to reflect on such a review? Well, certainly not on ordinary Dagestanis, who, if they got some money from federal funds, were real crumbs. All the big pieces of the pie went to the bureaucratic composition of the republic, the so-called clans, which held in their hands all the financial mechanisms of the region.

So, 20 and Dagestan remained a subsidized region, and this status has already become so rooted in the republic that many of its inhabitants have come to terms with their position: they don’t know how to earn a living, we’ll stand with an outstretched hand authorities will throw a penny or two. We have to quit - we are - Russia ...

Naturally, there were (and there are) in the republic those people who understood that a specific multi-level filter was built between the subsidiary flow from the federal center and the ordinary Dagestanis, which did not let all the “fat” sums through itself, but “spit out” "Towards the final recipient. This filter was created over the years, and with each new time interval, a new membrane grew to it, which was the next layer of the clan structure of the republic. At the federal funds, as well as funds obtained by criminal means, many representatives of the republican bureaucratic camarilla fed (and continue to feed). This camarilla nullified all the efforts undertaken to restore order in the republic and improve the economic situation.

But is stabilization in the republic beneficial to the heads of the Dagestan clan system, is the increase in the number of jobs, the opening of new enterprises using private investment beneficial? The answer can be only one: no! No, because stabilization is a blown-down smoke screen, behind which federal funds go like a black hole, through which it is impossible to discern who is yours, who is a stranger, and you cannot proceed to a real arrangement. It is much more profitable to have puppet gangs who obey strictly certain officials and solve, let's say, highly specialized tasks to eliminate those who are trying to push the region towards stabilization. And then it is advantageous to expose the same puppet gang groups by such groups that receive funding exclusively from some Saudi Arabia or Qatar. No - these states, as you know, have a stigma, and no one relieves them of responsibility, but today the basis for supporting the extremist underground in the same North Caucasus is the official clans that stuck to the federal funds.

In addition, in Dagestan, along with a number of other North Caucasian republics, a truly unique system of “filling” government posts has been built. These posts are simply bought. This is a kind of family business that, in the form of a vice-mayor’s seat, a prosecutor, the head of one of the departments of the Ministry of Internal Affairs, is literally inherited. A peculiar variant of the absolute monarchy acquired for banknotes in a single area of ​​life activity. If you want to work and earn money in the North Caucasus, save money and buy, for example, the seat of a republican prosecutor, some minister of the republican government. You cannot work, or the work was forced to stop by competitors - it does not matter - you put your brother in a chair (nephew, godson, son, grandson, and then on the list). He will continue the work begun.

Whole dynastic groups in the bureaucratic departments of the same Dagestan are, to put it mildly, not the same as the dynasties of doctors or teachers. There are dynasties of mayors, vice-governors, etc. A boy was born in the family of a republican official, and the parents already know for sure that he will be the head of the administration of such a municipality as a father (uncle, grandfather). A system that is generated by corruption itself breeds corruption.

Obviously, such a system literally connects all those who are going to fight it hand and foot. Abdulatipov was going to fight - he would have swallowed Abdulatipov too ... But it seems that the antidote was found. As they say, better late than never. In the same Dagestan, they stopped beating "on the tails" of a huge regional octopus, and decided to find the brain center of this paralyzing all the productive work of the mollusk. The detention of the mayor of Makhachkala, seven high-ranking officials of the republican Ministry of Internal Affairs, officials from other municipalities - this is a blow to the brain center. If this blow had not been dealt with on time, then Ramazan Abdulatipov would have two or three options: either turn into the next head of the region, dancing to the tune of criminal clans, or write a statement “on his own,” or, God forbid, one day to sit in Mined car. All these options are productive for criminal clans and, of course, absolutely unacceptable for the ordinary local population, tired of the endless disorder of the republic. The controlled president is a great success for the teams of Dagestan, who smiled at them, frankly, too often ...

Now the head of the republic has decided to open the eyes of the local population, which in recent years has apparently decided that if a Dagestani wants to work, then he either needs to go to the mountains, or go to Moscow, or buy the seat of a small official.

You have to earn it yourself, consume it yourself and help the country, is one of the quotes from the Acting President of the Republic, which he said in his interview on Russia 1 TV channel.

Will the words of Abdulatipov and other facts from the current life of Dagestan become the starting point for a fundamental change in the situation in the republic? I want to believe that they will, because in this case the role of the personality is really great. If all your personal qualities and. the president will be systematically implemented, the persecution of criminal contagion will go even more actively. It is gratifying to acknowledge the fact that Moscow does not leave Abdulatipov alone with the whole snake coil that has entangled Dagestan over the past few years. The latter operation, which draws on the status of a large-scale military, is direct evidence of this.

The Amirovites frightened the country by saying that after the detention of the mayor of Makhachkala, Dagestan would explode with agitation. But if Moscow “shovels” hit the criminal brain center, then there is no one to make unrest. And the relatively calm situation in the republic today is clear evidence that the puppet groups of criminal “sixes” have lost their control center, and they are not accustomed to act independently, and even without generous barorial funding.
By the way, the seemingly endless series of terrorist acts in Dagestan is still over. I would not like to think that only temporarily interrupted. There is an opinion that the perpetrators of these terrorist acts received orders for terrorist acts also to discredit the new head of the republic. Now, the “clerks” were behind bars, and the dynastic distribution system of bureaucratic chairs reeled as never before. The main thing is that the criminal clans do not have time to lick their wounds and embark on the familiar path of their “work”, the victim of which is at least the whole republic with a population of three million.

Ctrl Enter
Noticed oshЫbku Highlight text and press. Ctrl + Enter
We are
Ramazan Ramzan surpassed by the level of people's trustRamadan for Dagestan
130 comments
Information
Dear reader, to leave comments on the publication, you must to register.