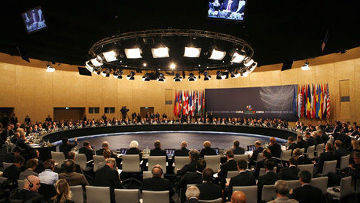 At the end of November 2010 in Lisbon, a NATO summit was held, at which a new strategic concept of the Alliance was adopted. Separate attention deserve several of its key points.

Firstly, the decision of NATO to act outside its borders is quite controversial (in particular, the Alliance was subjected to sharp criticism for not approved by the UN actions in Yugoslavia in 1999), but this provision remained in the new concept. On the one hand, this is understandable, since truly “instability or conflict outside NATO can directly threaten the security of the Alliance,” and in such a situation, NATO is going to act preventively. On the other hand, such a formulation, if desired, allows to act everywhere. In this case, it is encouraging that in the new concept, special attention is paid to the coordination of actions and plans of the Alliance with the UN, as well as an integrated (political, military and civil) approach to solving possible crises. Unfortunately, the document does not state that NATO outside its territory will always act only with the permission of the United Nations, but it should be recognized that today this organization is practically unable to respond quickly to emerging crisis situations of a military-political nature. Therefore, in operational terms, the new strategy of the Alliance looks quite realistic and balanced.

Secondly, it pays great attention to the threats of a new type. For example, one can only welcome the desire of NATO to more actively fight cyber attacks. However, the Baltic countries and Poland are more concerned about energy security. The new concept speaks of this only in the context of ensuring the security of the energy infrastructure, and perhaps only the formulation of the need to “consult with allies on strategic assessment and crisis planning” in the field of general energy security.

Thirdly, the concept preserves the principle of “open doors”, which is directly related to NATO’s relations with Russia. For a long time, the Kremlin has been trying to ensure that Kiev and Tbilisi were denied membership, and plans to join the Alliance were not approved at the summit in Bucharest. Therefore, it is commendable that he had the courage to emphasize the need for further development of cooperation with Ukraine and Georgia. This shows that NATO is not abandoning its fundamental principles.

Complicating the organization’s relations with Moscow can also be a problem articulated in the concept related to nuclear weapons. The document states that, given disarmament, the goal of NATO is to ensure that Russia's nuclear weapons are as far as possible from the borders of the Alliance. Russia, as you know, is extremely sensitive to any attempts to encroach on its nuclear potential, which it considers the only response to the US plans to deploy a global missile defense system. Therefore, the proposals to redeploy nuclear missiles deep into the territory and reduce the number of tactical nuclear warheads, which NATO also wants, are likely to be unacceptable. At the same time, the question of the CFE Treaty, the execution of which Moscow suspended some time ago, is unlikely to move, putting all the blame for this step on the West.

After the meeting at the Lisbon summit of the Russia-NATO Council, many were quick to look with optimism at the prospects for their cooperation in the field of missile defense. However, the representative of Russia to NATO, D. Rogozin, later stated that nothing definite had been decided on this issue, and all the basic negotiations were still ahead (it’s already clear that there will be no common system - this is only a matter of coordinating the work of two separate systems) . Taking into account the aforementioned problematic issues (including the problems of NATO expansion to the East, it’s still too early to talk about removing the geopolitical confrontation between the East and the West from the agenda), these negotiations will not be easy, as Medvedev once again confirmed armaments, if the agreement fails.

Summarizing, we can say that in the new strategic concept, the Alliance remained true to its fundamental principles (primarily the 5 article), generally gave an adequate assessment of the new threats and clearly realized the need for an integrated approach to solving crisis situations. However, when reading a document, dual feelings often arise: for example, it states that "today the Alliance remains the exclusive guarantor of security in an unpredictable world." But is that so? The concept also speaks about the proper level of military spending, and at the same time, the United Kingdom and Germany are significantly reducing their military budgets. Finally, the concept provides for close cooperation between NATO and the UN and strategic relations with Russia, but no one knows how it will look in practice. In short, for the document itself - a solid four (even with a plus), and then we'll see.