Exoskeleton for jumping from space

11 2013 June
13
The film "Iron Man" inspired developers to design a suit that would be suitable for jumping from space. The suit of the future or the exoskeleton for jumping from space was designated RL MARK VI; it is created by the developers of the company Solar System Express and biotechnology from Juxtopia LLC. This costume will be similar to the costume of the famous iron man. It is assumed that the costume will be equipped with gyroscopes, augmented reality glasses, control gloves, and even a jet pack. At the same time, the production model of the novelty will be released by 2016 year.


The idea of ​​creating this exoskeleton creators inspired fantastic films "Iron Man" and "Star Trek". It is assumed that this costume will be able to lift a person to 100 km. above the surface of the earth and then gently lower it to the ground without using a parachute. The developers of the spacesuit set the height in 100 km as the upper plank not by chance, this height is called the Karman line, which is considered to be the boundary between open space and the earth's atmosphere. At the same time, a jump from such a height is a task of great complexity. Initially, a space vacuum will act on a person, and then he will enter the earth’s atmosphere and will be in a state of free fall for quite a long time.

Sci-fi production is not the first time inspiring engineers to create technologies of the future. So in the movie Star Trek 2009 of the year there is a scene in which the captain of the spacecraft James Kirk, engineer Olson and helmsman Hikaru Sulu descend to the surface of the planet Vulcan in high-tech costumes, and the landing takes place with the parachute opening. In the Iron Man film trilogy, Tony Stark's costumes generally occupy a prominent place in the narration. The main components of its exoskeleton are repulsors (anti-gravity engines) in gloves and jet engines in boots. In this case, the helmet in this suit has a display with an indicator on the windshield. In addition, the hero can use voice control to monitor all available systems.

To put these ideas into practice, a large number of different tasks are required. Consider how the suit will protect a person from a sharp difference in temperature and pressure, solve the problem of supplying oxygen, think out how to resist hypersonic and supersonic shock waves. There are a lot of risks at such an impressive height: an athlete may experience air emphysema, decompression sickness or ebullism (boiling fluid in the body at low atmospheric pressure). In the event that the suit is damaged, a person can be left without protection and oxygen. 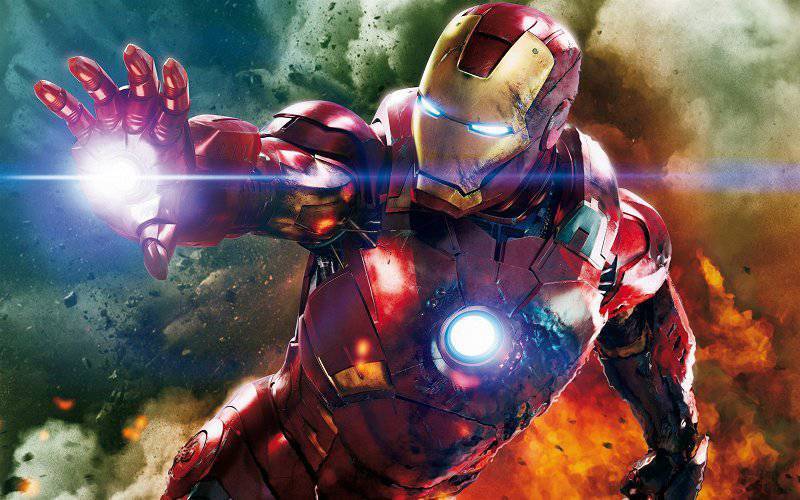 In addition, the designed costume must withstand hypersonic and supersonic shock waves. The tested overload will also play a big role. At that moment, when an athlete moves from a thin atmosphere to its denser layers, he will experience positive and negative overloads from 2g to 8g. And this can cause serious problems and the failure of the entire system. At the athlete from such overloads there can be a loss of consciousness or hemorrhage will begin.

According to representatives of the Solar System Express, a new spacesuit called RL MARK VI will allow the athlete to jump from near space, suborbital space, and even from low Earth orbit. The RL in the name of the spacesuit is an acronym on behalf of Major Robert Lawrence, who was the first African-American astronaut who died on December 8, 1967 during test flights on aviation base "Edwards".

To test its development, Solar System Express plans to take a jump similar to the Red Bull Stratos project. The first tests are planned to be carried out at a relatively low altitude using parachute landing, but the manufacturer’s goals are much more ambitious. With the help of specialized boots with miniature engines and costume-wing technology (wingsuit), the athlete will have to carry out a landing in an upright position.

At the same time, Juxtopia’s engineers are working on augmented reality glasses project. The principle of operation of these glasses should be similar to the information display technology on the windshield of modern fighters, when all the data necessary for the pilot is displayed on the inner surface of the helmet, pilot glasses or directly on the glass of the cockpit canopy. Juxtopia augmented reality glasses will supply the athlete with all the vital information that is needed to control the situation. They will tell about the temperature of the external environment and body, heart rate, pressure and show a lot of other useful information. In addition, the "jumper" will know their location in space, see the change in flight speed, and will also be able to constantly communicate with stations on the ground. The system includes cameras, voice control and external lighting. 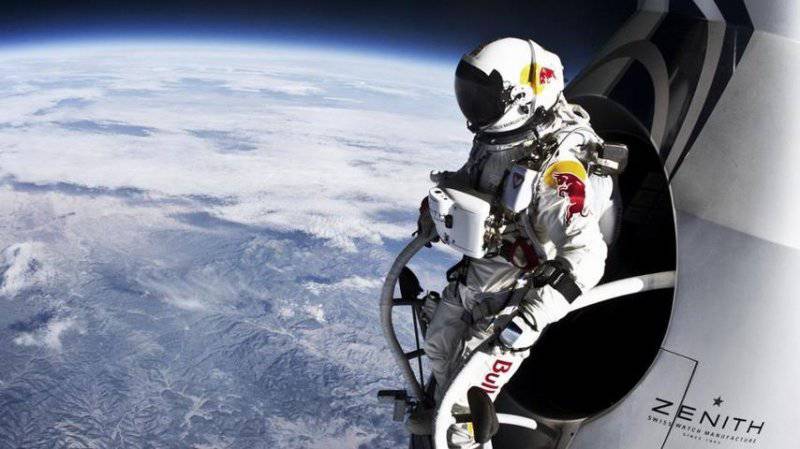 At the same time the most high-tech thing in the new wonder-suit should be gyroscopic shoes. It is assumed that they will solve several problems at once. First, at an altitude of 100 km. Aerodynamic forces will not act on the athlete’s body above sea level, for this reason it will be very difficult to stabilize the flight. At the same time, the gyros built into the boots will help stabilize the spacesuit's position in space and help the athlete maintain an optimal position when crossing the boundary of the thermosphere and stratopause. With their help, it is planned to implement a security system called “flat spin valve compensator” (flat spin compensator), which will be included if the jumper loses control over the position in space by more than 5 s.

One of the main functions of gyroscopic shoes should be a soft landing athlete. It is assumed that they will "turn on" when a person has almost reached the earth's surface. At this point, the miniature nozzles will release a jet of gas, which will ensure a safe and smooth landing. The controller of the gyro boots, as well as the mini-engines built into them, will be located on the control gloves, which is designed to provide easy access to the system.

It is also planned to implement another trick - the gravity development board (Gravity Development Board), which is an integral part of the costume being developed. This board will act as the main interface for managing the entire system. According to the technical director of the company Solar System Express, this development will be the first of its kind system that will be suitable for use in space and which will be able to surpass the functionality of the Arduino Uno. It is assumed that the first tests of the wonder-suit will take place in July 2016, so it’s not much time to wait for the realization of fiction.

The most outstanding jump at the moment

At this point in time, the most outstanding jump in stories made Felix Baumgartner (Red Bull Stratos), who simultaneously set the 2 world record right away: the first in the world made the jump out of the stratosphere (height 39 km), and also became the first person who overcame the speed of sound during the jump. Naturally, without the presence of special equipment his jump would have been impossible. Felix was dressed in a special suit, which was in fact a variation of the most modern NASA spacesuit. This spacesuit protected the brave jumper from sudden temperature changes (during the jump, the air temperature varied from -68 to 38 degrees Celsius) and pressure, as well as a large number of other hazards. 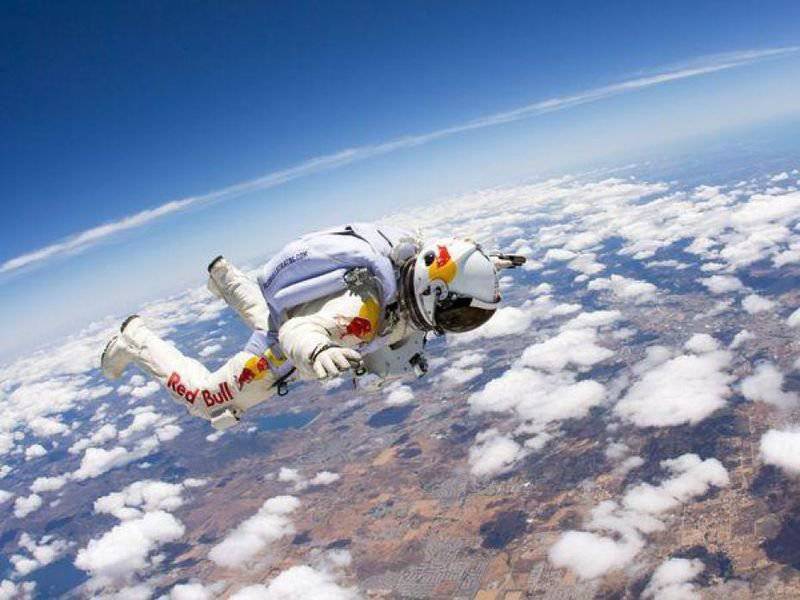 Never before have such suits, able to withstand extremely high pressure and at the same time to carry out the process of controlled fall, have not been developed. Created costume consisted of 4-x layers. The outer layer of the costume consisted of a flame retardant material called Nomex. Under this layer was located fixture holding the bubble, which was filled with gas. The inner layer of the suit was a breathable liner. As soon as the pressure increased, the suit acquired the necessary rigidity. At the same time, the design of the costume was supposed to provide a person with a strictly vertical fall, head down. This was decisive in order to avoid entering a flat corkscrew.

One of the most important tasks of the suit was to adjust the pressure. It was necessary to regulate pressure in order to avoid hypoxia, decompression sickness, tissue damage - i.e. those risks that are associated with sharp drops in atmospheric pressure. During the free fall, Felix Baumgartner breathed pure oxygen, and in his spacesuit maintained a constant pressure in the 3,5 bar. As the vapor of the diaphragms and the aneroid valve fell, the pressure in the spacesuit was internally controlled. At that moment, when the parachutist fell below 10 km, the pressure in the suit began to fall, which provided greater mobility.

The costume’s technology center was an armored chest strap. It included a high-resolution video camera with a wide-angle 120-degree view, a voice receiver and a transmitter, a hydraulic stabilizer that reported the angle and height, an accelerometer, and a dual set of lithium-ion batteries.

The parachutist's face was protected with a special plastic shield. At the time the parachutist exited the capsule, the temperature overboard should have been around -25⁰С. In a few minutes of free flight, the air temperature will more than double. In order to prevent the plastic shield from misting inside the parachutist from breathing, it was equipped with 110 with the thinnest wires, which were responsible for heating its entire surface. 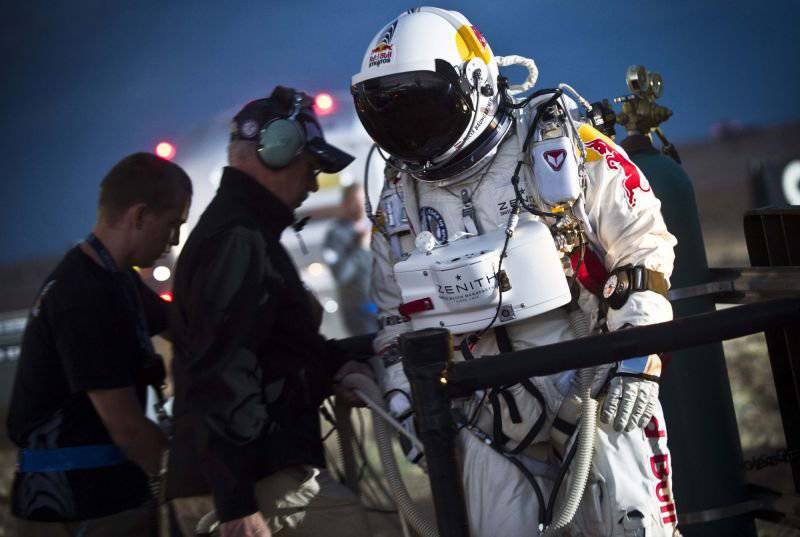 The parachute system of this spacesuit consisted of 3-x parachutes: parachute-brake installation, the main parachute and backup. At the same time, the last two were ordinary parachutes, which were increased 2,5 times to ensure additional stability. In the suit of Baumgartner, 4 locking knobs were provided at once: 2 red and 2 yellow. The red handle, located on the right side of the chest, released the main parachute and threw the brake, the yellow handles on the right thigh unhook the main parachute, so that the reserve parachute could turn around without tangling. In case the parachutist fell into a corkscrew and could not reach the handle, he could release the brake parachute by pressing the ring locking device located on the suit's left index finger for this.

Felix Baumgartner and his team did not hide the fact that the jump from the stratosphere itself is a very big and important achievement. But at the same time, the main purpose of the jump was precisely the test of the latest development of NASA.

Ctrl Enter
Noticed oshЫbku Highlight text and press. Ctrl + Enter
We are
About the prose of life in Apollo missionsThe history of the future: how humanity makes its way into space
13 comments
Information
Dear reader, to leave comments on the publication, you must to register.