The Murder of Paul I: The English Trail

11 2013 June
25
The nineteenth century in Russia began with regicide. On the night of March 12, in St. Petersburg in his own Mikhailovsky Castle, Russian emperor Pavel I was beaten to death. At half past night, a group of 1801 officers broke into the emperor's chambers, as a result of the conflict between them, the emperor was hit in the head with a heavy golden snuffbox and was strangled with a scarf. The instigators of this conspiracy were Peter Palen and Nikita Panin, and the group of direct performers of the palace coup (“drunken guardsmen) was headed by Leonty Benningsen and Nikolai Zubov. They called the cause of the conspiracy discontent unpredictable policy, which led Paul I. They were irritated by the disgrace and insults to which many of them have already been subjected, and others may have been subjected in the future. In fact, the conspirators wanted to change the emperor to a more "docile."


Later, other versions became widespread, among which an English mark can be singled out. Perhaps Great Britain, which was unhappy with the break in relations between the countries and the union of Russia with Napoleon, provided direct financing for the conspiracy and led them through the English ambassador Whitworth. Anyway, until 1905, information about the events of the night of March 12, 1801, was under censorship. For more than 100 years in Russia, the official version of the death of the emperor was called the natural cause: “death from apoplexy” (stroke). In connection with this, there was even a joke in society that Emperor Paul I died from an apoplex stroke by a snuff box in his temple.

It is worth noting that many Russian rulers were blackened before their contemporaries for trying to realize what exactly the interests of Russia are, and then try to follow these interests. Emperor Paul I is suitable for the role of such an undeservedly slandered man. His murder by some is considered as one of the first attempts to organize "external control" by Russia with the help of the so-called "fifth column", which solved its task without restricting itself in the choice of means. At the same time, the regicide received such a “mass-media” design, which even after more than 200 years, the legend, which the members of the conspiracy furnished their intent, has a steady circulation. 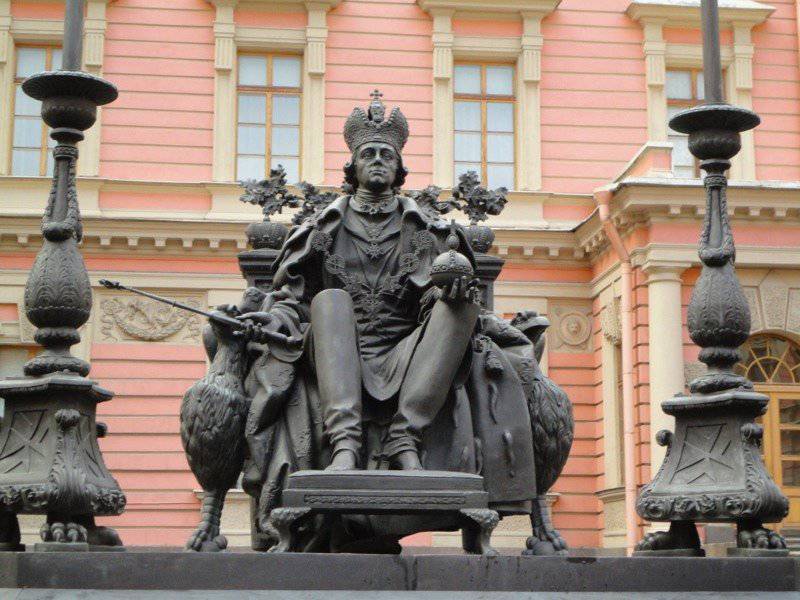 This legend is that Emperor Paul I was distinguished by “tyranny” and “tyranny”, and almost the half-empire of the emperor was also declared. According to available evidence, the character of the emperor was really savory. But hardly for the Russian nobility, Paul I was worse than the governors, the majority of officials and other administrative officials of the empire for his subordinates or the majority of landowners for his serfs. In confirmation of his "tyranny" often give an example with a link to Suvorov. But at the same time, for some reason they forget that the emperor himself soon admitted his mistake, which was the result of temper temper. How many even of the modern middle managers are able to admit that they are wrong?

However, it is clearly not hot-tempered character and “tyranny” that caused the conspiracy against the emperor, this conspiracy seemed to have political overtones. Russia since the time of Peter the Great, who actively invaded the politics of Europe, and during the reign of Catherine II, who had very great weight in European politics, did not receive any special dividends from this. Moreover, numerous British companies practically blocked Russian international trade, while small European electors and princes, mostly from German lands, sought to get new possessions on the blood of a simple Russian soldier.

That is exactly what happened during the 2-th anti-French coalition, which was created at the initiative of the UK. Participation in it did not bring Russia any benefit. The troops of Alexander Suvorov, active in Italy, crossed the Alps and took part in a large number of battles. As a result, Napoleon lost all his Italian acquisitions, but all the benefits from this were Austria, which among other things did not fulfill its allied obligations. 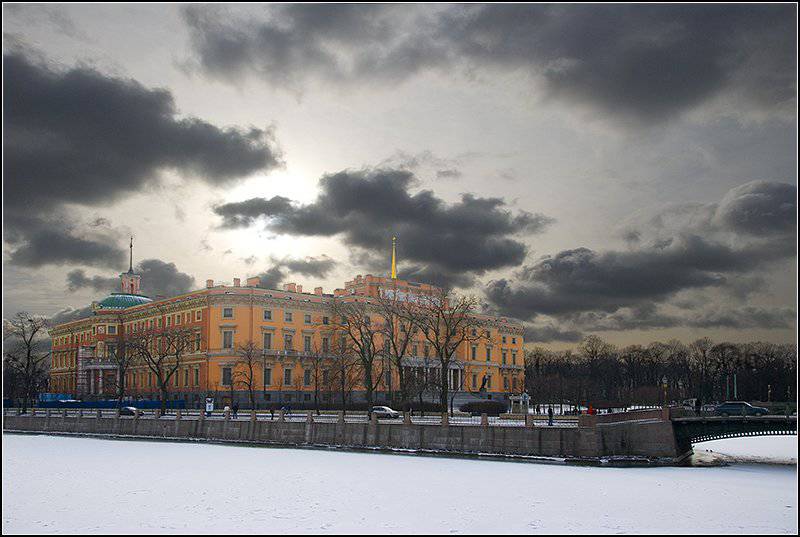 Mikhailovsky Castle
The Russian-British expedition organized in Holland led to numerous casualties among General Herman's expeditionary corps. Only during the first attack on Bergen did Russian troops lose about 3 thousands of people killed, about 1 thousands of Englishmen were also killed. At the same time, the British troops did not support the Russian units that had already taken the city, and they had to retreat. Subsequently, this led to the catastrophe and the evacuation of the expeditionary force to the UK. There, the Russian allies were treated badly enough, resulting in an increase in the number of victims.

As a result of this campaign, England was able to get the entire Dutch fleet, and Russia did not receive anything of value. In addition, Great Britain captured Malta, which the Russian emperor, who became the Grand Master of the Order of Malta, was going to use for his own purposes. Malta could become the Russian province, and in the future one of the bases of the Russian fleet in the Mediterranean Sea. A series of these events forced Paul I to leave the number of participants in the second coalition, pushing Russia to establish an alliance with Napoleon. Under these conditions, according to some researchers, who include Rambo, Hoffmann, Lavis, the formation of joint plans of Bonaparte and Paul on a military campaign in India begins.

In those years, England was recognized as the "mistress of the seas", but she had no land connections with her richest colony. At the same time, France and Russia did not have sufficiently strong fleets to conduct active combat operations against England at sea, but they also had the opportunity to create a land route to India that would pass along the coast of the Caspian Sea and further through the territory of modern Afghanistan. The organization of such a path could significantly enrich the Russian empire, simultaneously undermining the economy of England. 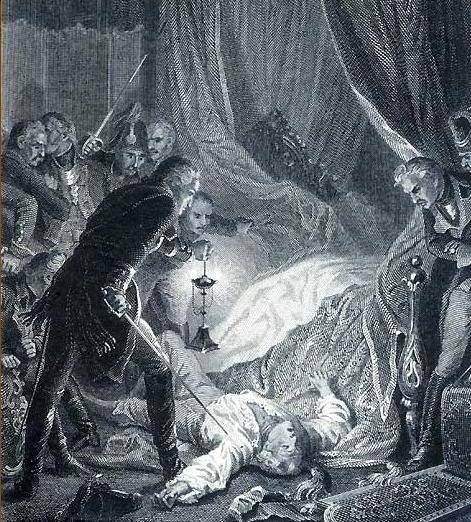 The murder of Paul I, engraving
According to the researchers of the "Indian campaign", in this expedition it was planned to use about 70 thousands of soldiers belonging to the 2 expeditionary corps - one Russian and one French. French soldiers were to arrive in Russia through the Black Sea. They had to cross several southern provinces and meet with Russian troops at the mouth of the Volga. Neither the local khans and emirs, nor the British themselves had the strength to resist such a large-scale invasion.

The military campaign of France and Russia on India, which was considered the richest colony of Great Britain and brought tremendous income to the English treasury, could not but be disturbed by London. It is known that the Russian emperor even managed to send to Central Asia, which was also in the sphere of interests of England, the military expeditionary corps commanded by the ataman of the Don Vasily Orlov. The very next day after the death of Paul I, this Cossack detachment was recalled back.

If we talk about the internal policy of Paul I, then it was dictated by a clear understanding of state benefits. In the first place you can put the 2 imperial decree - the decree of a three-day corvee and the law on the imperial surname and the order of succession. They were accepted on the same day - April 5 of the year 1797.

The decree limiting the compulsory work of the serfs to their landlord 3, days a week, was the first, albeit very clumsy, attempt to at least somehow restrict serfdom. It is in this sense that its meaning in stories domestic legislation is quite large. For almost half a century, the Russian government did not make equivalent attempts to limit the power of the landlords over their serfs. 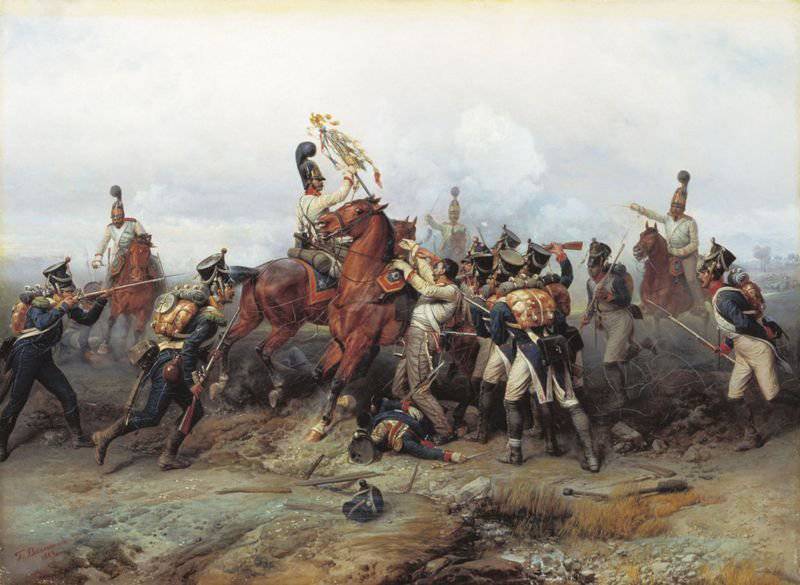 The law on the imperial family name and succession was intended to eliminate all grounds for palace coups that so often shook Russia in the 18th century. Ironically, the man who prepared this law became the victim of the conspirators. This law eliminated any arbitrary interpretation of the rights to the supreme power in the country, suggesting strict order in this matter. Lawyers of the XIX century called this law the germ of the Russian constitution, as this law limited the autocrat's will in such an important matter as the inheritance of the throne.

The law of succession and the decree of the three-day serfdom show the remarkable abilities of the state thinking of Paul I. If we talk about some other orders of the emperor - restricting corporate self-government, restoring corporal punishments for eminent citizens and nobles, it is worthy of some regret that the emperor understood the rights equation own subjects only as bringing the higher to the lower class instead of the lower layers gradually raising to the level of the higher.

Although the assassination of Emperor Paul I did not immediately return Russia to an alliance with England and a convenient policy of enmity with France, but the ground from under the feet of a possible mutually beneficial union of France and Russia was knocked out. The course of the new emperor Alexander I led the country first to the unnecessary for it 1805 and 1807 wars, and then to Napoleon himself to Moscow (although there was still a period after the conclusion of peace between the countries of Tilsit, when it seemed that it was still possible to turn to another) As a result, for the whole half a century Russia was absorbed in the tasks of building its ephemeral external grandeur in Europe instead of dealing with its own problems of internal development. These were the 50 years that Russia lost, as early as the 1850-70-s, this was understood quite clearly.