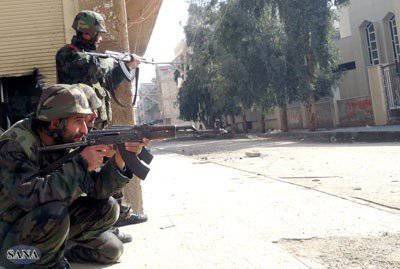 
Perhaps the most violent enemy of Syria over the past two years has been Turkish Prime Minister Recep Tayyip Erdogan. Dreaming of the revival of the Ottoman Empire, he most loudly attacked the independent Syrian leadership. Insulted President Bashar Al-Assad with dirty words - why not give an evil little dog a chance to have such “dogs” like the United States and NATO behind it? During his last visit to the US, Erdogan tried to persuade Obama to immediately introduce a “no-fly zone” over Syria — that is, simply to bomb the SAR, as was done with Libya. And one of the most egregious acts of Erdogan was the detention of the Syrian plane flying on the flight Moscow - Damascus, when the Russians were left hungry, they did not let the consul and even the doctor come to them, although they had to provide all the passengers with a free hotel until the flight was allowed . Moreover, the aircraft’s cargo was seized and not returned until now, although nothing was forbidden there.

Erdogan did all this under the pretext of "the struggle for democracy." He called Bashar al-Assad only as a "tyrant" and "cruel oppressor." Bred demagogy on the topic that once the demonstrators oppose the Syrian leader, he must leave. When the Syrian side proposed to Turkey to come to an agreement on border security, Erdogan sharply rejected this proposal, stating that "Bashar al-Assad must first agree with his people." Everywhere, where it is possible, it was covered with the concept "people". Depicted suffering for the Syrians.

But, as they say, "he sees a speck in another's eye, and does not notice it in his own log." Erdogan did not condemn himself when he dispersed a 1 May demonstration in Taksim Square with tear gas and did not call himself a cruel oppressor. Now it is this square in Istanbul that marked the beginning of its end.
The demands of the citizens were peaceful - they were in favor of preserving the last green island in the stone city. Contrary to the desire of businessmen behind the Erdoganov's "Justice and Development Party", build a shopping center on the site of the park. In response to the protests, the “great democrat” Erdogan responded with tear gas and water cannons.

I emphasize - in response to peaceful protests!

Worth returning to recent history Syria. When some people, called up by the “Arab Spring”, took to the streets, the UAR President Bashar Al-Assad listened to their reasonable demands. He announced reforms. Amendments were made to the Constitution, then a national referendum on the new Constitution was held. After that, new parliamentary elections were held. That is, the head of state fulfilled the peaceful and legal demands of the protesters. Another thing is that the forces behind the conspiracy, including Erdogan, did not need reforms or democracy in Syria — they needed to translate the conflict into an armed channel in order to destroy the rival country and throw it back. In addition, Erdogan also raped his personal material benefits - with his direct complicity, the equipment of factories and factories in Aleppo was plundered and taken to Turkey. Also there were many Syrian historical values. That's the whole "revolution".

As for Erdogan, he said that he would not fulfill a single demand of the protesters. He “forgot” his rhetoric about “suffering people,” announced his people, who came out with legitimate demands, “thugs” and “hooligans”. During the hottest phase of the confrontation, when his regime suffered a threat of falling, he fled to Tunisia. And from there he stated that he was ready to "hang the protesters on those trees that they protect."

To date, 4 people have died in Turkey, more than 3 thousands have suffered. Thousands of people are imprisoned.

Erdogan was forced to drink a bitter pill, made according to the recipe, which was intended for Syria. And where did all his supposedly democratic beliefs go? When disturbing events began in Syria, Erdogan said: “Assad must leave,” and now, when his own people told him “No,” he says that “the demonstrators must leave.” And this is instead of thinking where to go yourself. As they say in Syria, maybe Doha would agree to accept him.

When the Syrian army liberated Al-Xayr, the High Command announced that this victory would be the beginning of other victories that would continue until the country was completely liberated from terrorist groups. Currently, Operation North Storm is starting to free the city of Aleppo.

Aleppo is the second largest Syrian city and was considered its economic capital. Most of the industrial enterprises were concentrated there. For a long time, he was away from the tumultuous and terrible events that swept Syria. By no means did the rebels manage to win over the inhabitants of the city to their side. Residents of Aleppo went to the central square, making huge demonstrations in support of the legitimate leadership. When the League of Arab States adopted a resolution against Syria at the end of 2011, the Aleppians organized a huge tent camp to protest the involvement of the Arab League in their country's affairs. I, who was then in Syria for the first time, happened to attend this event. It was especially pleasant that, along with the Syrian flags, there were Russian ones. The delegation from Russia was met by city residents with joyful shouts “Russia, Russia!”

With the start of 2012, the first terrorist attacks began in Aleppo that claimed the lives of innocent citizens. But this could not break the will of the Aleppians, who hated the terrorists. Particularly strong provocations began after the unsuccessful assault on Damascus in July 2012. Then, the militants (not without the help of foreign intelligence services) managed to kill the country's leading security officials during the July 18 meeting. But the militants attempt to take Damascus completely failed, faced with the resistance of the army and residents of the capital. But they needed so much success! And then they took on Aleppo.
Terrorists would never have managed to take a single urban quarter of the economic capital of Syria, if, firstly, a part of the army would not have to be withdrawn to protect Damascus, secondly, there would be no treachery, thirdly - and this is the main factor - At that time, a massive influx of Al-Qaida terrorists from Turkey would not start.

The fighting for Aleppo destroyed a lot of the beautiful things that were in the city. Ancient markets built under Alexander the Great were burned ... The historical library was plundered. The famous Aleppa Citadel suffered, depicted on the works of many painters and attracted the attention of many tourists who visited the city in times of peace. The beautiful and ancient Umayyad Great Mosque was turned into a burnt skeleton, its southern wall and minaret were blown up by gangsters.

Businesses suffered the most. More than 1000 of them were completely looted, their equipment exported to Turkey. It should be noted that, despite the gravity of the situation, before the fighting in Aleppo, the Syrians did not suffer so economically. Thanks to the efforts of the leadership, it was possible to restrain the rise in prices and inflation. There were many products and industrial products in the country at prices 4-5 times lower than in Russia. Since then, as Aleppo was struck - at the very heart of the economy - no more titanic efforts have been able to hold back prices…

If militants in Al-Ksayrah’s crimes were involved in penetrating Lebanon with the help of the Al Mustaqbal bloc, under the leadership of the notorious Saad Hariri, the main role in the suffering of Aleppo was played by Erdogan’s regime in Turkey. From there was the main stream weapons and terrorists trained in camps in Turkish territory.

But the rebels and the forces that supported them still failed to implement their plans completely in Aleppo. They were eager to seize the city entirely, to arrange there "Syrian Benghazi." They said that the Istanbul Council was about to be transported there - a kind of political body of pseudo-revolutionaries. But thanks to the resilience of many residents of the city and military personnel, the terrorists never managed to seize the city entirely. Fighting went for separate quarters. Even where extremists managed to settle, the earth was burning under their feet, and there was no question of any transportation by the Istanbul Council.

By now, the army has cleared 18 of gangsters of settlements to the north of the city. For several months, militants were operating there.

The following case shows how ordinary citizens live under the rule of these “freedom fighters”.

An 15-year-old teenager in Aleppo made a living by selling coffee on the streets. Militants asked him to sell them "in debt" - which, given their gangster morals, could only mean that they would not return the debt. The boy refused. They began to talk to him about the “values ​​of jihad”. He replied that if even the Prophet Mohammed came down from heaven, it would not have forced him to sell on credit. In response, the teenager grabbed. Then a “Sharia court” took place over it. The sentence was harsh - the death penalty "for atheism." The boy was killed.

Now the Syrian army is freeing the settlements of Al-Atareb, Khreytan, Anadan in the province of Aleppo. The clashes continue in the area of ​​the Ming airfield. The rebels repeatedly stated that they had managed to seize the airfield, but each time they suffered heavy losses and were forced to retreat.

At present, when Erdogan will not be able to support the terrorists, and the supply chain of the rebels from Lebanon is blocked by the city of Al-Xayr - it remains only to wish the Syrian army success in defeating the terrorists in the north of the country.

Ctrl Enter
Noticed oshЫbku Highlight text and press. Ctrl + Enter
We are
Situational analysis of the death of the MH17 flight (Malaysian Boeing 777), made on the basis of engineering analysis from 15.08.2014Syria: Americans scare themselves, and Asma Asad buys chairs
Military Reviewin Yandex News
Military Reviewin Google News
92 comments
Information
Dear reader, to leave comments on the publication, you must to register.