11 2013 June
12
Judging by the latest gestures in the armaments of the armies of the leading countries of the world, they decided to rely on snipers. Otherwise, just do not explain this active development of sniper weapons, as well as the fact that they did not have time to adopt one model, it is replaced by an already more advanced one. Naturally, such a routine is far from being a good thing, especially from the financial side of the issue, but if you look at the fact that the army receives new and new samples of sniper rifles almost uninterruptedly, that is, there are positive aspects to this. I think that just because no one would have done such expenses, it can be concluded that the already considerable value of a sniper in battle would become even greater.

Not so long ago we tried to deal with a series of Arctic Warfare sniper rifles, and they have already tried to write them off. Rather, not so much to write off, how to recognize obsolete. In particular, in February 2009, the US Command of Special Operations announced a competition for a new family of sniper rifles, sufficiently unified among themselves, so as not to have problems with the supply and repair of weapons and at the same time effective enough to perform all the tasks in various calibers. In order to exclude amateur activities with ammunition for improving the characteristics of weapons, it was strictly stipulated for which cartridges weapons are created. So, to some extent, this competition hinders the development of weapons in general, since perhaps a new worthy sniper ammunition would have appeared in the process of developing weapons. This was far from the only requirement for a new family of weapons. In addition, a mandatory requirement was the availability of firing, both from the right and left shoulder, which, subject to the creation of weapons with manual reloading, was a rather strange requirement. Naturally, no one wanted to adapt their rifles in order to be able to rearrange the bolt handle from the right to the left side, so that, in general, such a requirement can be called a convention that affected only the absence of weapons in the bullpup layout among competitive samples. Separate demands were also made for accuracy, which should have been equal to one angular minute for the 10 series of shots on all ammunition at reasonable distances up to 1500 meters for large-caliber weapons. On the one hand, such a requirement is not the most difficult, on the other hand, it is not so easy to ensure the mass production of weapons when unifying models among themselves. Also, special requirements were imposed on the reliability of rifles, which had to withstand 1000 shots before the first delay. The dimensions of the complex should not exceed millimeters in 1320, as well as the weapon should have a folding butt, which would shorten the length during transport to millimeters 1016. Not paid attention to the weight of the weapon, which should not exceed 8 kilogram with a magazine equipped with five rounds, which is not a reasonable requirement, given that the rifle and chambered for .50BMG should be in the weapon family. However, such a rifle clearly did not fit into the general requirements, so for her, of course, made an exception. Separate requirements were made for disassembly / assembly of weapons. So, the dismantling should take no more than two minutes, and after assembling the rifle should not require re-adjustment. In addition, there were other requirements, but I don’t think it’s worth enumerating everything, and it’s clear that the requirements were reasonable, but quite tough. Time was given to designers a little - until March 3 2010. 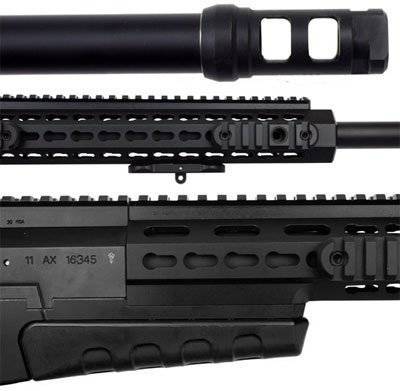 It is clear that those who wish to participate in the competition were not measured, because victory meant a very large order, and, consequently, a lot of money. Many offered ready-made samples, an attempt, of course, not the most intelligent, but it was worth a try. Among those who tried was Accuracy International, which offered its series of Arctic Warfare rifles and naturally was refused because the weapon did not meet the requirements. The company after it received a “turn from the gate” did not refuse to participate in the competition, but on the contrary was actively involved in the work on the creation of a new family of weapons. The designers managed to manage even ahead of time, as early as January 2010 presented two samples for the .308 Win and .338 LM cartridges, which had the designation AI AX308 and AI AX338, respectively, both rifles could be adapted for firing with .300 Win cartridges when replacing trunk, bolt and shops. Generally speaking, frankly speaking, it’s about the same rifle, since there are no differences between the options under the .338 and .308, well, except for the barrel, bolt and shops, of course.

The appearance of the weapon, though cute, does not cause delight, as it has become boring. Folding to the left, seemingly flimsy, in reality, a sufficiently strong butt has the ability to smoothly adjust along its length, which ensures an exact fit for the shooter of any build and in any clothes. The stop for the cheek arrow is also adjustable, but in steps. In the lower part of the butt there is an additional emphasis, which is adjustable in height, and the task of long-term monitoring of a certain area is made easier, since the weight of the weapon can be distributed between it and the bipod. The pistol grip does not stand out as remarkable at first glance, but if you look closely, you will notice that its rear part is replaceable and can be replaced by another. That is, under the arm of an arrow a weapon can also be adjusted. For the second hand, an overlay with slits is installed in front of the store to prevent possible slipping. With straps fastening a weapon as usual, the maximum bust, although it can be easily removed. The upper mounting bracket, as usual, is made non-removable and located on the receiver, its continuation, the side and bottom can be replaced with mounting strips of shorter or longer length. Separately, it should be noted that the folding and height-adjustable bipods are not mounted on the mounting bar, but are mounted in the mounting holes for the slats, although there may be a variety of variations. It is noteworthy that one of the mounting strips is located on the butt bottom. I don’t personally see applications for it except for holding an additional store. Weapon controls, as always, are limited to a very small set, inherent to bolt rifles. Attention deserves perhaps that the switch fuse, which is made as a separate lever behind the handle of the shutter. Barrels can use a variety of weapons, all of them are free-hanging, due to the design of the rifle, can have a smooth external surface, as well as down, to increase the rigidity of the barrels. To reduce the recoil force when firing, the weapon is equipped with specially designed muzzle retarding brake compensators, which, to the extent possible, have a minimal effect on the accuracy of the fire. The muzzle brakes, recoil compensators are installed on the thread located at the muzzle of the barrel, a silent firing device can be installed on the same thread, although its design options are very limited and greatly increase the length of the weapon, since it cannot enter the barrel itself because of the forearm with fastening straps. 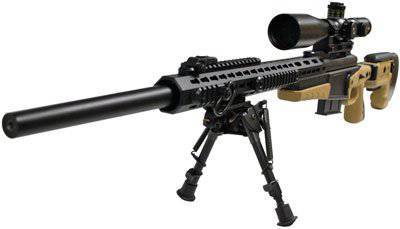 Much has been taken from the AW series of rifles in the bolt group, but there are some changes. First of all, for the .308 and .300 munitions, the thickness of the stem of the bolt was increased by a millimeter 2, it was necessary to create the valleys on the surface of the bolt. Thanks to these valleys, the rifle shows a very high reliability when working in adverse conditions, since sand, mud and ice are simply squeezed out without interfering with the movement of the bolt. From the family of sniper rifles Arctic Warfare was transferred and a special coating on the bolt, preventing it from icing. The main essence of the principle of locking remained unchanged. The shutter locks the barrel bore on the 3 stop when turning 60 degrees. The trigger mechanism of the weapon was also decided not to touch, it, as before, has a trigger with a warning, and the force of pressing the trigger can be adjusted from 1,5 to 2 kgf. The course of the trigger can also be adjusted, limited to a limit of 13 millimeters.

A lot of attention was paid to the disguise of weapons. All rifle pads are easily replaceable, they can be black, green or light brown, in addition, the manufacturer offers lining absolutely any color, even pink or under the skin of a leopard - the customer’s desire with money is the law.

As already noted earlier, in addition to these rifles, a little later, a large-caliber version of the weapon was also presented. The large-caliber rifle with the designation AX50 uses .50BMG ammunition, also 12,7x99, is also non-self-loading with a longitudinally sliding gate. In general, the weapon can not be described, since it almost completely repeats the previous versions of rifles, naturally on a scale, but some differences still exist. Since the larger ammunition required an increase in many weapon units, switching the fuse in the form in which it was originally turned out to be inconvenient, because it was decided to replace it with another one. Instead of a protruding fuse switch, a checkbox appeared, a switch embedded in the case, but this did not make it inconvenient to switch the hand holding thumb. Actually, this is the only difference, everything else is done exactly, as well as in smaller-caliber versions.

Accuracy International also did not forget about the civilian arms market and released a huge number of weapon options for a wide variety of ammunition. .338 LM, .300 WM, .308 Win, .223 Rem, .234 Win, .243 Win, .260 Rem, 6.5 Creedmoor and this is not a complete list of those cartridges for which created samples for the civilian market.

Summarizing everything written above, it is worth noting that the replacement for the Arctic Warfare family of rifles is quite good. However, it’s rather necessary to look not as a substitute for weapons, but as a further development with a different designation, since many nodes have been preserved, while others have been improved. One way or another, no one has yet spoken about the complete withdrawal of a series of AW rifles, since too many countries have adopted them, but in the long run Arctic Warfare will lose their relevance and will be replaced with other samples, perhaps even those described in this article. After all, everyone knows that until they start working on ammunition or invent something fundamentally new, each new weapon model is only marginally better than the previous one, and many are ready to give a lot of money for this slight improvement. And even when developing something truly unique, surpassing the characteristics of currently existing samples, it is unlikely that someone will abandon the structures that have been tested by time in one day and switch to a new one, let the best at the test site, but not tested in battle. It seems to be moving forward, but we are marking time.

Ctrl Enter
Noticed oshЫbku Highlight text and press. Ctrl + Enter
We are
Sniper fire in local warsWhat should be a modern sniper (part of 1)
Military Reviewin Yandex News
Military Reviewin Google News
12 comments
Information
Dear reader, to leave comments on the publication, you must to register.