Friend is known in trouble 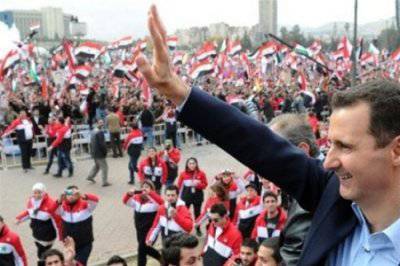 Good afternoon, dear colleagues. In general, there was a small article in the plans, the idea of ​​which appeared on the basis of debates on the branch about the delivery of Russian Iskanders to Armenia, but events in the world are developing so unpredictably and sometimes bring such surprises (both pleasant and dramatic) that violate all plans and streamlined train of thought.


In today's short article, I would like to share the joy of the fact that some of the assumptions expressed by me in the mentioned branch were justified, namely, that the Assad government is carrying out plans for arranging post-war Syria. Yes, yes, precisely - the post-war. the slaughter which was unleashed by the West by the hands of an international mercenary rabble, except as a war and can not be called. And these settlement plans testify to the irreversibility of the process of getting rid of the mercenary plague sent to the Syrian land.

As many of us know, at the most dramatic time for Syria, a friendly Syria Iran opened a credit line for 4 billion to the Syrian government, and with gratitude this financial assistance from Assad was received. War is extremely costly, and in a situation of almost complete isolation, it is also painful. And the help of a friend, his friendly shoulder and his full support, are perceived with gratitude, increasing many times over.
We all know that in this difficult situation, which the world democratizers tried to drive the Syrian people, a very small group of countries did not join the international herd shouting “Atu!” To Syria. And we are proud to be able to realize that our RUSSIA has been at the head of this group. RUSSIA AND CHINA. The few who joined later, those who at the very beginning of the string of this bloody orgy unleashed by the states and Co., fearfully limited themselves to silence and only with time dared to join their voices in defense of Syria, can now also pound themselves in the chest and say that " we plowed the same ”, but our country can rightfully be proud of the fact that it was she who in alliance with China and Iran from the very beginning declared their position on Syria and did not back down from this position, despite all the hysteria in the UN and EU forums, who rolled Wedge tonches and cashmere.

So, if financial assistance from Iran, military and diplomatic from the Russian Federation and the People's Republic of China was perceived by Syria with gratitude, the World Bank offered these days to Assad, and this is nothing but 21 billion Baku!), Bashar Asad replied a categorical refusal!

It was literally the following:
/ that “Syria will not forget its friends”, and that the license for the extraction of oil and gas will be “granted to a Russian company”. Contracts for the restoration of the country will receive Chinese companies. /

What is the answer guys! The lion's answer (as many remember the father of Assad was firmly established in his time by the nickname - Leo of the desert), who turned into a lion, aware of his strength, respecting friendship and grateful friend and, moreover, knows well the example of other countries (Cyprus, Greece , Spain, Iceland, Ukraine and many others), as World Bank assistance turns into a deadlift on the economy of the country that has accepted this “help”.

I would also like to appeal to those in the West who enviously start issuing tirades in the form of the fact that now Russia will greedily plunder oil from the depths of Syria - do not judge by yourselves, “partners”! Neither the USSR nor the post-Soviet Russia has ever dropped to shameless robbery, speculating that at some stage it provided assistance, as the Western Alliance countries are doing in Libya, pumping out and taking Libyan 30 oil per barrel. Even waging war in Afghanistan, the USSR built schools and showed a purely human concern for ordinary Afghans who fell into the meat grinder of the war, which many ordinary Afghans now recall with belated gratitude. And never shamelessly robbed neither the vanquished nor the saved. NEVER! Shameless looting of the vanquished with words of help and humanism is in the nature of things for Western politicians and Western ideologues. So let them live with this mentality. Just do not let them be surprised at the hatred that burns in the eyes of those people in whose countries their rulers impose their own democracy.
Good luck to all of us and sincere and reliable friends, guys!

Ctrl Enter
Noticed a mistake Highlight text and press. Ctrl + Enter
We are
About Stalin and KhrushchevWhat you didn't want to know about England
128 comments
Ad