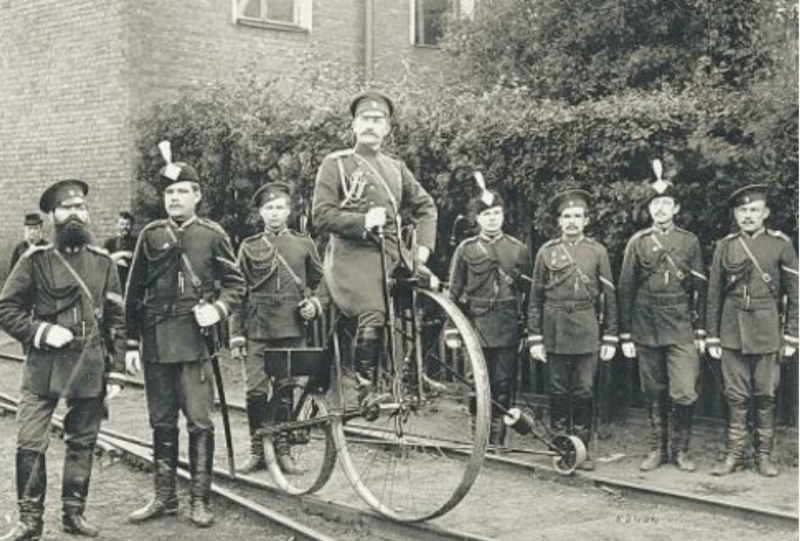 At first, the agency consisted of only four officers and 36 lower ranks. Peter I appointed his favorite, Adjutant General Anton Devier, to be its head, the Chief Police Officer.


The Russian police were not only obliged to keep order in St. Petersburg, the police had the authority of the court and imposed penalties in criminal cases. And she oversaw the cleanliness (by the way, these responsibilities for the police remained until its very collapse in February 1917). The servicemen punished the negligent, scavenged, bridges the streets ... Through the efforts of law enforcement officers the first lights and benches for rest were installed.

Now let us turn to the figure of the first Russian general chief of police, whose biography is entertaining, and fate is whimsical.

... He was born in a poor Jewish family that lived in Amsterdam. He grew up, entered the fleet, and then - happy luck! - caught the eyes of Peter I. Anton Russian Tsar liked, and he called him to Russia. The career of a young man abruptly, like in a fairy tale, soared upwards.

He received the title of Adjutant General - invented for him, married the daughter of Peter's favorite Menshikov. Supervised the construction of the port in Revel. He participated in the investigation of the case of Tsarevich Alexei Petrovich and, together with others, signed a terrible sentence for him.

He served as a lieutenant general, received the title of count, pretty rich. But soon after the death of Peter I, his former influence was lost.

A whole tail of sins stretched behind him (some might have been attributed to his enemies). In short, in 1727, Deviera was accused of treason, deprived of titles, titles, ranks. As well as money, land, estates, serfs ...

Twelve years dishonored, humiliated Devier spent wintering in Zhiganovsky, 800 versts from Yakutsk. Then, however, was forgiven. In 1741, Empress Elizaveta Petrovna signed a decree on the release of Deviera from exile “with absolution”. In modern terms, it was a complete rehabilitation.

The aged, plunged Devier walked again through the familiar, worn out by his boots, the steps of the career ladder. All returned to him! And even the location of the queen.

Already at the end of his life - in July, 1744-th - Devier sat down again in the chair of the St. Petersburg general police chief. But he stayed in office for only a few months. In April, 1745 of the year, the veteran's sickle retired - “until recovery”. However, it did not follow - less than a year later Devier went to the grave ...

In 1722, the police appeared in Moscow. In it, as well as in St. Petersburg and Warsaw - the order was supervised by the chief of police, who was subordinate to the governor-general.

In Belokamennaya Colonel Maxim Grekov was appointed to this position. He lived on Tverskoy Boulevard in a house specially reserved for him. By the way, his followers also lived there.

He pulled the strap Greeks six years. It is only known that he was twice attracted to the investigation. Other details of the biography are covered with the darkness of time.

It is curious that some of the Moscow chief of police officers quit their posts, then returned to them. In particular, Pavel Kaverin, who was in office for a total of two and a half years. And Ivan Divov flashed a comet at all - he headed the Moscow police for less than a year ...

Nikolai Arkharov, on the contrary, served in Belokamennaya for ten years. He knew to the smallest detail everything that was done in the city, he found the criminals with amazing speed. His eye was so sharp that he could identify a thief or a murderer just by sight.

By the way, according to one of the versions, it was the officers of his police who were vigilant and frisky - nicknamed “arkharists”.

There were among the chief police officers and nondescript persons repeating each other: Nikolai Arapov, Yevgeny Yurkovsky, Alexander Kozlov. Bribetakers came across, such as, for example, Alexander Balashov. The contemptuous description of a contemporary is preserved about him: “The whole of Russia knows the shameful foolishness of it. He took and takes mercilessly wherever possible; he took both as chief politician, and as Petersburg military governor, and even as minister of police. ” Alas, this sin stretched for many of his colleagues ...

The controversial figure was Alexander Shulgin. Prior to his appointment as chief of police, he had the cleanest reputation. George Knight, fearlessly fought with the French in 1812-m and before - at Austerlitz. And Borodino's field is stained with his blood.

After taking office, he swore to eradicate fraud and theft. However, this did not succeed.

It is said that he had as informers crooks and thieves who initiated him into their secrets. It is believed that because of this, he revealed many complicated cases.

A contemporary wrote about him: “... he is agile, active, has tripled a surprisingly prison lock and fire brigade, but the despot is terrible, it’s tied up, but he unlocks himself from his words.”

Shulgin, from his high position, with a low salary, by the way, gained considerable benefits. On the "left" money, received, in particular, from the patronage of merchants engaged in wine buy-off, built a luxurious mansion on the corner of Tversky and Kozitsky lanes, where everything "differed elegant taste and convenience."

He amassed so much good in Moscow that he barely fit him in a huge wagon train, which moved to the place of the new service in St. Petersburg. On the way, he met with Count Alexei Arakcheev. He was amazed at the sight of magnificent crews, heavily laden waggons, magnificent horses and dandy servants. The count wondered who owned such wealth. Upon learning, he asked to tell the owner that “all this is not the case with Arakcheev himself” ...

He served in the capital Shulgin not for long - Nicholas I dismissed him with the "pension of the then-salary". Accustomed to luxurious life, he quickly withered and, filled with debt receipts, began to drown grief in wine ...

People policemen respected and feared. The governor-general, who was taller in rank, was rarely seen, and even from afar — a carriage flashed by a pair of frisky horses, and its trace was gone. And the police chief appears every single day and he has to do with everything.

Gogol in Dead Souls so painted the portrait of the police master: “The police chief was in some way the father and benefactor in the city. He was among the citizens, quite as if in his own family, and he visited the shops and the living yard, as if he was in his own storeroom. In general, he was sitting, as they say, in his place and he grasped his position to perfection. It was even difficult to decide whether it was created for a place or a place for it. ”

However, it would be unfair to portray all the main law enforcement officers of Moscow in black. There were a lot of energetic, active people among them. This should recognize Alexander Vlasovsky, appointed to the White Stone at the end of the XIX century. He zealously took over the cleaning of Moscow, forcing homeowners to clean the cesspools and cesspools in a short time. Violators were fined mercilessly, for huge amounts of money at that time - from 100 to 500 rubles.

“Colonel Vlasovsky quickly brought Belokamennaya into appearance, if not completely decent, but still more or less decent,” wrote Vlas Doroshevich. “To rationalize the city, where anti-hygienic, anti-comfort outrages have accumulated for dozens of years, is a matter that requires great effort and a lot of time.”

Vlasov cleaned not only the city, but also the ranks of the police. Many private bailiffs and quarterly overseers, who have tarnished the honor of the uniform, dismissed and recruited new people.

Urban ordered to stand at the post in the middle of streets and squares and strictly monitor the external order and the movement of crews. Finished their idle life, forced to treat the public politely, which had not been seen before. Moreover, he obliged them to transfer old men, women and children from one side of the street to another.

And the look of the policemen itself has changed - instead of thin and fat, by no means imposing appearance, it recruited the soldiers who had finished serving in the guard - tall and burly, with pudom fists.

From the “Moscow City Police Instruction”, published in 1883:

"The policemen must take care of the good name and honor of their rank ... Require the execution of the law with dignity and politely, by no means in a rude and offensive way ... No matter how well the police officer is working, clever and quick, but if he is noticed in the deliberate accusation of an innocent bravery and bribery, he will be subject to a strict legally enforced ... Drunks who go staggering and falling, send to their apartments, if they are known ... The city may be allowed to take a cab driver for free to take a drunk or suddenly sick house ... "

Vlasov won many flattering characteristics. Here is one of them: "It was an outstanding talent, one can say a virtuoso in his own business, a great artist who could give his business special beauty, a police aesthetic of his own kind."

But there is another opinion - Count Witte: “By nature, Vlasov’s a man is cunning and crafty, in general, he has the appearance of hama-bullies; he introduced and strengthened in the Moscow police the beginnings of general bribery ... ”At the same time, Sergey Yulievich seemed to reluctantly admit that“ from the outside, indeed, he seemed to keep order in Moscow ”.

Vlasovsky flew from his post overnight - after the Khodyn catastrophe of 1896. Although the people in all blamed his immediate superior Grand Prince Sergei Alexandrovich ...


The last Moscow chief police officer was Dmitry Trepov. One of the four sons of the most cruel Petersburg mayor, who was shot by Vera Zasulich.

Trying to bring down the high temperature of the society, Trepov favored the workers' trade unions, arranged for them lectures on economic issues, and distributed "cheap and healthy" literature. And, as he himself believed, he achieved the result: “Before, Moscow was a breeding ground for discontent, now there is peace, prosperity and contentment”. But Trepov was cruelly mistaken about this — the city soon began to seethe.

In 1905, the post of chief of police was abolished. The chief of police became the mayor. Meanwhile, Moscow, engulfed in a revolutionary neurosis, was shaken by the bombings and the whistling of bullets. The crowd trashed police stations, militants fired in the police. And those ... The four thousand lower ranks turned out to be a little more than a thousand old revolvers, mostly faulty. And almost unarmed law enforcement officers died hundreds of ...

So ended the era of the Russian police.