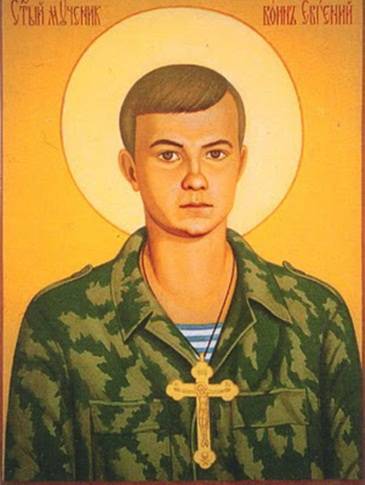 If God will lead you, my son, to be a soldier, then live there like God: keep yourself in such a way that even in a small way you do not get angry with God. First of all, serve the great sovereign with faith and truth, in battle be firm, fearless, stand courageously against enemies, do not let yourself in the hands: fight bravely while you are standing on your feet. Most of all, fear treason, lest you be under a curse and perish forever: it is better to die than to change. And if you are captured, sleepy or wounded, then by no means tell the enemy that we suffer from lack of food or supplies from the military; Say: "We are all satisfied, we have nothing in poverty." And if you began to torture you, do not say a word about the shortcomings of your army, accept death, but do not declare the defect to the enemy: then you will be accepted to the holy martyrs. If they ask you: how many people do you have in the ranks, say: "I only know how much we have porridge, and how many of us are in the army, I have nothing to know, because I'm just a soldier." Say about your comrades: "In battle, they are all brave, all the old soldiers, experienced, and our brethren - beginners - a little typed." And if you leave them in your regiments, then all that they have seen in good order, secretly declare to your boss, and do not tell your comrades that the enemies are strong and abundant to everyone.


Be you, my son, to God and the great sovereign, faithful servant, be pleased with your salary. And if a certain salary is not enough for you, then do some handicraft to get yourself something with honest work, and do not interfere in any wrongful matter, do not offend anyone, take nothing away from anyone, and wrong Fear of acquisitions more than fire, so that God may not anger you, and you will not destroy your soul for the untruth. If you stand in an apartment with someone, you cannot be the master of the house in which to oppress: be a servant to him, not a lord; although you are great to the tsar and to the king and great to him, however, be gentle in everything and obedient to him, do not cause any annoyance, always speak lovingly and affectionately with him: he will sometimes spare his last penny , but you will begin to restrain him, but to survive from the hut, and he will cry out to God from the sorrow of his heart, and God seeing his grief, for this he will send you even greater sorrow to the Lord for me; you will not lose your honor by doing peacefully and lovingly with the owner of your apartment. Know, my son: where love is, here and God dwells, and where there is enmity and annoyance, there the devil happens. Judge for yourself: is it better to live with God or with the devil? And if you want to be with God, be meek like a sheep. And if you are a lodger gentle and loving, and if at the same time you are doing a small service, then you will be nice to every man: and for such a kind visit you will be happy as your own, and you will be at ease as your own. Soldiers do not annoy the people so much as insults and arrogance and bold actions.

And you, my son, for God's sake, do not be bold, but be worthy with every man. From that you will not be brave in war, if you offend your own Orthodox Christians. Many at home hold themselves bravely, but in a war for others they hide, who is humble at home, he is a brave man in battle. I knew one soldier well: he was so mild that everyone called him chicken, it was impossible to call him a soldier; and under Chigirin, a dozen, two or three Turks hacked to death with his own hands. And if one looked at him, no one would have believed: the growth of a small, lean face, moreover, he was also stooping, and he was already not young; and by humility and courtesy it is not soon possible to pick up another such one. For this meekness, God sent him his help, so that his comrades could not marvel at his courage.

So you, my son, do not look at evil mischievous people: between yours be tender and kind, but in a battle against the enemy be angry and fearless; at home be a gentle lamb, and in the swearing field a lion, terrible for the enemy. But in war with comrades, be charitable, and with all, both military and artisans, and with merchants, be kind enough to be afraid most of all so as not to offend anyone, do not lie to anyone. The Holy Gospel gives such commandments to the soldiers: do not offend anyone, do not slander, and be content with your salary (Lk.3; 14). And it is only for these three virtues or commandments that the soldiers are promised salvation, more so if you attach fasting and prayer to them, and abstention from fornication, because in battle the cleanliness is more than the shield of the copper, and in civilian life cleanliness is a great good. The Israelites were invincible in battle, so their enemies purposely sent their wives and girls to them, so that they could sin with them so that God would allow them to defeat the Israelites for fornication. You see, my son, from old times even the infidels knew that cleanliness in battle is more precious than a shield, and fornication - death. One Greek warrior is told that when he went to war against the Bulgarians, on the way he happened to spend the night with one person; at night the maiden came to him and began to incite sin. But he resisted, and drove her away from himself three times. Then he fell asleep and sees a field for him: and in that field he sees the beaten Greeks, the whole field was covered with corpses, and between them he saw the empty place, as one person could lie down: and he would be told: place; but because you fought the serpent three times, you will not be killed. " This is how, my son, the purity of the body keeps a person in battle; and if the will of God be done, and a pure man is killed, he will be consented to the holy martyrs.

And he who lives the fornication, remains in all sorts of untruths, he suffered, even for faith, however, God alone knows whether he will receive a reward for that. But fear my son the sin of sin. And even if there was no war, you confess twice a year and commune of the Holy Mysteries. And in wartime, in all four posts, go and take Communion, and be ready to die every day. A warrior needs a hundred times more than a monk to keep himself from all sin, as if someone does not obi chet and live clean, because he must always be ready for death. If you see that the enemy is chasing your officer, or comrade, or someone else, then at least this person and the evil that you have done to you in every way possible try to save him from the trouble. And if you succeed in saving him, you cannot boast that you did not spare yourself and saved your enemy from death: let only God and your conscience know this, because it is a great thing to remember no evil; The Lord commands: love your enemies ... do good to those who hate you (Matt. 5; 44). And whoever does this will be called the Son of God. And if you, my son, helping out your foe, will be killed by yourself, then I cannot say how God will magnify you in this Kingdom and will glorify him with eternal glory. The Lord said: There is no more of that love, as if someone laid down his soul for his friends (John. 15; 13), and more if he put his soul for the enemy!

In military affairs, your commanders, both older and younger, be obedient to everything; have a gun in good condition, keep the powder in a dry place; Do not waste your charges so that the sovereign’s treasury does not disappear in vain, and learn to shoot at the target: do not miss a single week, so that even if you don’t shoot at the target. Then you and one will serve for ten. Yes, look, my son, do not carry with you any conspiracies. If you have them with you, you will offend God with those: after all, they will be with you instead of God, and if they kill you with them, then your blood and soul will die for nothing. And if poverty is tolerated, do not take anything away from others by force: it’s better to feed on the name of Christ or hire from your brethren and do not take anything away from anyone: God save you from this! Remember: you cannot destroy your soul with soldiers, but you destroy with evil deeds. If you will be in the spiritual rite, but you will not part with evil deeds, then you will perish; and being a soldier, if you live according to God, you will be saved, you will inherit eternal life.