Launch of the first Italian frigate of the type FREMM 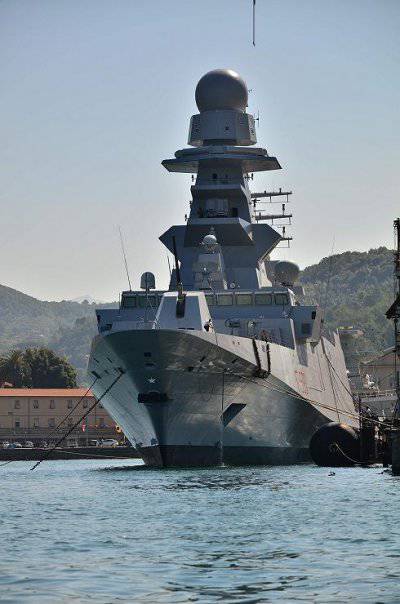 On May 29, 2013, in La Spezia, at the shipyard Muggiano of the Italian shipbuilding association Fincantieri, an official ceremony was held for the introduction of the Italian Navy upon completion of all tests of frigate F 590 Carlo Bergamini, the first frigate of the Italian-built FREMM program. The actual construction of the ship, like all subsequent FREMM frigates for the Italian fleet, was carried out by the association of Fincantieri at the Riva Trigoso shipyard (Genoa). F 590 Carlo Bergamini was laid there on January 7, 2008, launched on July 16-19, 2011 and put to sea trials on October 6, 2011. At the Muggiano shipyard, the ship underwent the last revisions before surrendering to the fleet.


In total, the Italian Navy plans to acquire 10 frigates of the FREMM type, of which four in the ASW variant and six in the multipurpose GP / LA variant. Head F 590 Carlo Bergamini was built in a multipurpose version. The second Italian frigate of this type, the F 591 Virginio Fazan, was built in anti-submarine version, launched on March 31 2012 of the year, is currently undergoing tests and is expected to be commissioned to the Italian fleet later on in 2013. Currently in Riva Trigoso, there are three more anti-submarine frigates in construction (F 592 Carlo Margottini, F 593 Carabiniere and F 594 Alpino) and one in a multi-purpose version (F 595 Luigi Rizzo, 5 was laid in March 2013 of the year).