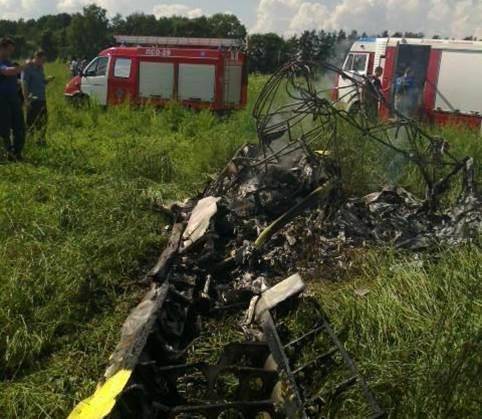 As reported on the website of the Ministry of Emergencies, in the vicinity of the village of Pyatnitsa in the Solnechnogorsk district of the Moscow region, a light-engine aircraft crashed. On board were two people who died. One of the pilots was an ace military aviation.
Aircraft AI-10 "Icarus", collapsed in the Solnechnogorsk area, was controlled by a former pilot of the famous aerobatic team "Swifts", stock lieutenant colonel Sergey Vasilyev. The pilot failed to take the plane out of the corkscrew. The second victim - 48-year-old Valery Bugayev, reports Life News.
According to a police spokesman, “the pilot lost control at an altitude of about 100 meters, the plane went into a tailspin, crashed to the ground and caught fire.”
The departure was made from the airfield "Shevlin". Those who wish for a fee are given the opportunity to make a training flight with an instructor.

Ctrl Enter
Noticed oshЫbku Highlight text and press. Ctrl + Enter
We are
Innovation Day of the Southern Military District: emergency equipmentThe accidents of military aircraft in Russia over the past 10 years
Military Reviewin Yandex News
Military Reviewin Google News
13 comments
Information
Dear reader, to leave comments on the publication, you must to register.